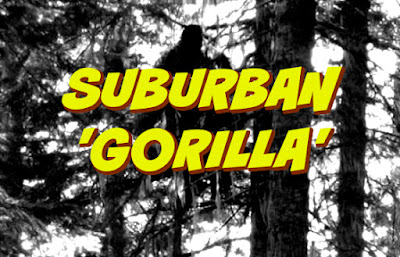 We must not discount the possibility of a released pet gorilla. This is possible.  Yet such a creature is way too likely to make itself known on a sustained basis and become a potential nuisance

That then leaves us with the Giant Sloth whose confidence in its cover allowed itself to be seen. When seen it immediately retreated into cover.

We do not get much detail except to confirm not a bear or Sasquatch or human.  Al good though. .


This occurred around 1998-99 to a close friend of mine who just recently brought it up again, which compelled me to write in. I usually don’t like to recount other people’s stories, but my friend would never be the type to share this experience with you or any other individual he didn’t personally know, so here I am.

My friend’s family lived on a busy street in Wayne, NJ. Behind the house was a pool and deck with a yard and wooded area beyond. One summer afternoon, he, his brother, and his mother were sitting around the pool on the deck when they heard an unusual rustling up a tree on the fringe of the wooded area. Looking up they saw, what my friend described, as a large, brown gorilla-like creature. It was perched on a branch while vigorously shaking another smaller branch above it which was causing the loud ruffling sound that had caught their attention.

As they stared at this thing dumbfounded, they were close enough to realize that it was staring right back at them as it shook the branch. Then, after about a minute, it dissolved into the treetops and deeper into the woods. It was the summer so they quickly lost sight of it among the dense foliage and didn’t dare trail it into the woods due to the freakiness of it all.

The next day, I was invited over to hang out and go swimming at his pool and that’s when he told me what had happened the previous day. As he was telling me, he pointed out the tree and branch on which the “gorilla” appeared. It was a towering tulip poplar, and the branch which he pointed out had to be about 50-55 feet high. I asked him why they didn’t call the police and he said that if they ever saw it again they would.

To this day, my friend will say that he and his family still do not know what it was, but in the same breath he’ll also say it had to be a guy in a gorilla suit because there is no other explanation. If it were a guy in a gorilla suit, he would have been extraordinarily athletic since he was able to climb roughly 50 feet up a bare trunk and acrobatically maneuver from tree to tree.

I also asked him if it could have been someone’s pet monkey, but he said it was too big and was definitely either an ape or a person dressed like one. There are no zoos remotely close from which a gorilla could have escaped, and if there was such an animal on the loose, I’m sure it would have been big news. I suppose we’ll never know who or what it was in the treetops of Wayne that day. - Keith in NJ
Posted by arclein at 12:00 AM