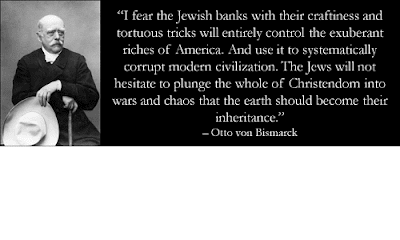 This quote from well over a century ago calls out the NWO thinking of today and the pernicious thinking of central banking down through the ages.  It never was Jewish so much as usury. Yet today the USA has its own Bismarck in Donald Trump.
This remains the thinking of B level intellects and is dangerous for all that.  Folks act on this.

We now have a Qanon drop that gathers the strings.

I already understood the answers to these questions from other crumbs given us.  We now have 29,000 sealed indictments pending and what is happening is that the DOJ and FBI are been cleaned up or perhaps depoliticized.  This must be complete before those indictments are triggered. Of course, folks have been interviewed and their unpleasant nature is speeding up the exodus of private interests around Washington.

Most following all this are becoming impatient.  Yet it is obvious that Trump is continuing to tighten control and no surprise opposition has emerged to send this off course.  Plenty of noise, but recall that the opposition cannot communicate without being listened to. They are so used to talking in the clear that no comm discipline ever developed.  Thus plots are uncovered in real time which allows the best counter.  In practice, Trump is able to deliberately inspire reactions to build cases.  Do not imagine that this is not happening.

We have a signal that Mueller and Rosenstein are all part of the plan.  The mere fact that the investigation was deliberately staffed with problematic democrats tipped me off to the fact that it was not a real investigation but a cover for all the real work being undertaken by thousands of investigators...

I do think that the DOJ and the FBI are now secure. The Korean show bus routine needs to be finished first I think and then we can start mass arrests.  I suspect that the Pedophiles get to go first to reshape public opinion regarding trust in a number of public figures.

Think LOGICALLY.
Mass exodus in DC?
Mass exodus - corporate CEOs?
Why?
Who has the POWER?
Who has the CONTROL?
If POTUS was NOT IN CONTROL would they be retreating?
Who is the AG?
Who MUST approve the firing/dismissal of DOJ officials?
Re_read DOJ org change (open source - more in pipe)
Who is the FBI director?
Who MUST approve the firing/dismissal of FBI agents?
Re_read FBI org change (open source - more in pipe)
If SESSIONS & WRAY are DC SWAMP/DEEP STATE why are they cleaning their respective houses?
Use LOGIC.
Why are they slow walking unredacted data?
Why are they slow walking doc disclosures?
Why is the WH backing up DOJ?
What if the same data is being used by other investigators?
What does it mean if a grand jury is impanelled?
Why are confusing questions asked as to outcome re: Mueller?
What would be the purpose of creating confusion?
What was Sessions' Senate confirmation vote?
What was RR's Senate confirmation vote?
If RR is dirty, Mueller must also be dirty.
If Mueller is dirty, RR must also be dirty.
Common denominator.
Why did Sessions pick RR?
Everyone has an opinion.
Few have the facts.
Few know the plan.
Midterms [save & push]?
Swing voters to retake House/Senate?
Impeachment proceedings (open source) initiated?
Power at all costs?
Blue wave?
Use LOGIC.
Why must the DOJ & FBI be cleaned FIRST?
What is the DOJ responsible for?
What is the FBI responsible for?
Why did HRC get a free pass?
Use LOGIC.
Define single shooter.
Who is HUBER?
Define IG.
When does SESSIONS step back in?
Already is?
Why did SESSIONS secretly engage HUBER?
Why did SESSIONS reveal HUBER?
Timing is everything.
Department of Justice does not discuss ongoing investigations or confirm specific matters,
What about the active investigation into leaks?
"Horowitz oversees a nationwide workforce of more than 450 special agents, auditors, inspectors, attorneys, and support staff whose mission is to detect and deter waste, fraud, abuse, and misconduct in DOJ programs and personnel, and to promote economy and efficiency in Department operations."
Why did MP step into the C_A prior to Sec of State?
They are deeply connected.
Think Offshore.
MIL INTEL providing support during this time?
Why are select EO's aggressively being written and put into law?
State/C_A next?
Think logically.
No outside comms.
JUSTICE.
Q
Posted by arclein at 12:00 AM