The Real Reason Why Trump Ordered the Military to the Border 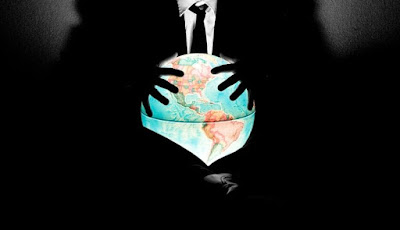 What you read here is unbelievable but also a part with what we understand as the general outline of the NWO program to own the DEMs and to establish winning conditions for suppressing the republic.
The same tactics have been applied to the EU with significant success, although blow-back is slowly eroding those gains. A united Europe led by Russia along with the absorption of the RC church into the Orthodox community is now plausible as the counter attack strengthens with the rising power of Trump.

Locking down the Middle East is well along as well.  However the big fight will first be in Europe.

It is becoming clear that the counter attack by loyal forces began three years a go and has long been in the planning.  It still may get hot, though sealing the borders make that unlikely.

We do not know who the generals are and we do not know to what degree China and Russia have been co - opted into this scheme.  I suspect that even they were worried but unable to warn anyone when the politicians were bought and paid for.  I do not see then as a foundational source but certainly a supply of convenient ideologues
I do think that this is actually a sad resurrection of the NAZIS.  It is enough to know that we are engaged and no one will get any more passes.


The Real Reason Why Trump Ordered the Military to the Border
http://www.thecommonsenseshow.com/real-reason-trump-ordered-military-border/

If it were not for the election of President Trump, and his steadfast support of the Republic, the United States would be firmly in the midst of dissolution.


This article connects past documentation, previously provided on The Common Sense Show along with relevant current events. The combination of history and contemporary happenings paint a picture of a nation that is being attacked from within and from without. The United States faces the unusual historical position of being internationally undermined through the threat of World War III to the simultaneous existence of a well-orchestrated coup against the solidarity of the Union. In other words, there is a well-orchestrated coup underway against the sovereignty of the United States and the enemies of the Republic are apparent for all that have eyes to see.

The Plot to Internally Overthrow the Republic Stems from CALEXIT


According to Paul Preston as well as my own research, we have collectively discovered reports that were circulating that numerous state legislators from California, including then “California Senate pro tem Kevin de Leon), State representatives from Florida, Texas, New Mexico, Arizona, Nevada, Utah and Colorado have been meeting with members of La Raza, the Mexican government (consulate), Mexican Mafia (“La EME”), California’s violent Mexican gangs (Nortenos /Sureños/ Sur 13), La Familia and religious leaders (Catholic / Jesuits) to come up with a plan to separate from the United States as well as the above mentioned states”. Governor Brown, his aides, and the Bank of China have been in attendance in several of these meetings designed to sever California from the US. Further, The Common Sense Show also reported that George Soros is bankrolling some of the costs associated with this movement. In addition to Soros, the United Nations and the Chinese government have had representatives at the CALEXIT meetings as well as the Mexican Consulate.
Further, the Russians are involved in this plot as well.

This is a photo-op of the roll-out of the CALEXIT embassy placed in Moscow in 2016. The Russians are complicit in this treasonous plot. Further, it can be viewed that this is an act of war by the Russians against the American people. Key and former members of the Obama administration are complicit (eg CALEXIT Spokesperson former Attorney General Eric Holder).


The bulk of American retail and agriculture comes from California. If the state were to ever exit the country, the economic impact would prove catastrophic and managing the nation in this much crisis would prove impossible. This would force the emergence of collectives (a state or combination of states arising to protect local and regional interests).


Paul Preston’s embedded sources have been clear about the intentions of the CALEXIT movement. If they cannot exit the country through a contrived and unconstitutional process, they will create such division and violence that the United Nations will complete the process through the importation of UN Peacekeeper troops on American soil to complete the breakup. Under CALEXIT, California would become a protectorate under the control of the United Nations.


CALEXIT organizers have been quite clear, if they cannot exit the US, they will cause so much trouble that the UN will enter the country to restore order under the Kigali Principles (see below). This is exactly why we are seeing border unrest and President Trump’s reaction to this would-be-crisis by placing the US military on the border. Let me be crystal clear, President Trump did not threaten to end NAFTA and DACA over the mere presence of 1,500 immigrants which were previously coming our way. This invasion is designed to turn violent by the forces which are following this “Caravan to madness”.


This CALEXIT (eg George Soros) movement is dead as evidenced by the emergence and popularity of the New California movement which is legal and supported by the vast majority of California residents as evidenced by the 38 counties out of the 58 who have joined the movement. Therefore, Soros and his cronies must resort to violence to achieve the goal of breaking up California and ultimately the United States. And this contrived violence will give the UN the pre-emptive excuse to enter the US to protect the citizens from violence.


The so-called immigration invasion from Central America only consisted of 1,500 immigrants. The threat was much more ominous that the mere presence of 1,500 would-be border crossers. Paramiliary forces from MS-13, the drug cartels and terror groups are following and still plan to wreak havoc on our southern border.


Every source I have and every source we are seeing come forward are saying the same thing. The goal of what is happening at the border is to cause chaos.


In May of 2016, the Obama administration approved a set of principles that gave permission for UN peacekeeping troops AND POLICE to use force to “protect” citizens in armed conflicts. The Blue Helmets of the United Nations are coming, and the American police force could now be a part of a global police force. And this police force will be brutal. The Constitution of the United States will no longer be in effect.


The UN’s Kigali Principles which will put UN troops on American soil in times of trouble. The interesting thing to note is that the Trump administration does not have to approve the United Nations entering the United States. Obama has already guaranteed the UN that right and the right is irrevocable in the mind of the United Nations.


U.S. Ambassador Samantha Power told a high-level U.N. meeting Wednesday focusing on the responsibility to protect civilians that the United States was “proud” and “humbled” to join 28 other countries that have pledged to abide by the 18 pledges.


U.N. peacekeepers from these 29 countries are now required to act in cases where civilians are in danger.


Let me be very clear, this is a case of PROBLEM-REACTION-SOLUTION where one simply creates the problem and then provides the solution. More documentation on the Kigali Principles in which Obama gave away the sovereignty of the United States to the United Nations can be obtained here.


The reason that Trump is putting the National Guard, and also elite mlitary units on the border is to prevent further incursions into the United States in order to prevent the spread of violence and to keep the UN out. One of the main proponents of the CALEXIT movement as well as the open borders concept, Kevin De Leon (D-State Legislator) told Fox and Friends on April 8, 2018, that the military has no right to defend the border and it is “not a criminal offense” for illegal aliens to enter the United States without documentation. This is an example of the lawlessness that is being faced by the President as he tries to secure our borders.


There is an additional factor that is worthy of consideration at this point. In 2014, I and others in the Independent Media provided extensive coverage of how rogue elements of DHS, beholding to Obama and their allies in the United Nations personally oversaw the catch and release of MS-13, by Border Patrol officials. This is why Trump has troops on the border. He is not going to allow the United Nations a foothold to develop so they can justify following the Kigali Principles to place UN soldiers on our soil to “prevent violence” on our southern border. The presence of UN and DHS officials in terms of facilitating the 2014 Central American immigration invasion was so pervasive that Oklahoma Congressman, Jim Bridenstine went to investigate but was denied entry to a DHS facility.


Also, in 2014, I was in contact with two Border Patrol officers and a DEA informant who told me the same stories. DHS and the UN were facilitating the entry of illegal groups into the United States. The Deep State portion of the DHS/UN are still at work trying cause havoc on the border for all the reasons listed above.


These same rogue forces are at work helping to facilitate paramilitary (eg MS-13, ISIS drug cartel interests) into the United States in order to facilitate a humanitarian crisis. This is why Trump has moved to secure the border and in doing so, Trump is saving the country from internal collapse and foreign troop occupation.

This Is Not the End of the Story


In order to keep the UN out of country, Trump will have to maintain a military presence on the border. However, there is much more at work here. Tomorrow, I am going to discuss why China must help cause border instability and UN intervention in the United States in order to maintain their economic and foreign policy aims. In short, they need a weakened America.


I will leave the reader with one tidbit, I think there is a enough evidence to conclude that there is at least the threat of a coup going on inside of the Communist Chinese Party (think 1929 Japan). In order for the ruling party to maintain executive control, an aggressive foreign policy in Asia must be enacted and a weakened United States must be central goal of the Communist Chinese Party so the US cannot interfere with Chinese expansionism in Asia. Hence, the reason that China has immersed themselves in CALEXIT.
Posted by arclein at 12:00 AM