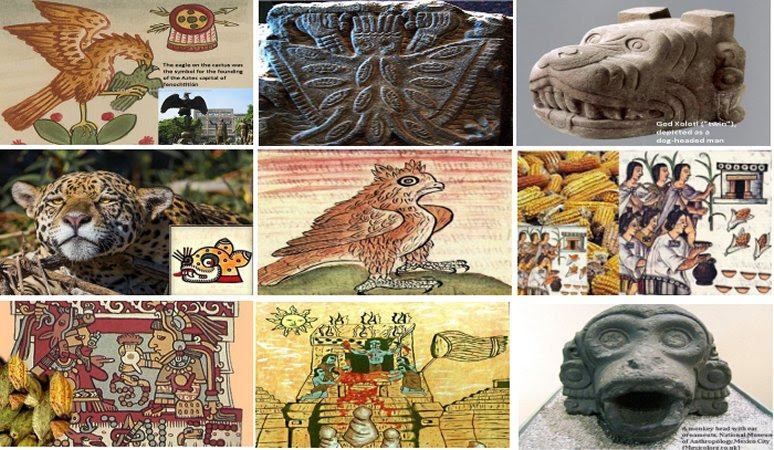 A worthy compendium that say much to the spiritual language of the Aztec.  The Way of the Aztec is now been recovered to such an extent that it can be characterized in literature.

Much said in the past is irrelevant. They operated an antique empire as well as any.  Public sacrifice of war captives is unusual only in that they brought them home for public consumption not unlike the Romans.

I wonder if the Romans influenced this display.  I am certain communication was possible
.

The Aztecs associated different symbols with important gods who were often depicted holding them or were accompanied by them. The symbols were linked with natural phenomena, animals, plants, minerals or elements.


The Aztecs saw these symbols in daily life and all around them, in nature, on the walls of their temples, in jewelry, in their language, writing and religion. 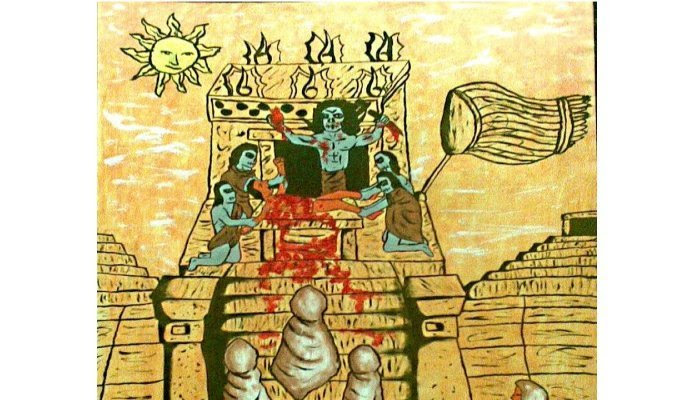 The Aztecs of ancient Mexico believed that human blood was necessary to strengthen the sun. During its nighttime wandering through the dark underworld, the sun was so weak that it needed new powers. It was important, if cosmic order was to be maintained. Human blood was the most powerful means to ‘help’ the sun to recover from its weakness. This belief explains the Aztec deep-rooted tradition of very frequent sacrifices of prisoners, whom the Aztecs forced to die. Blood linked people with the gods already at birth. 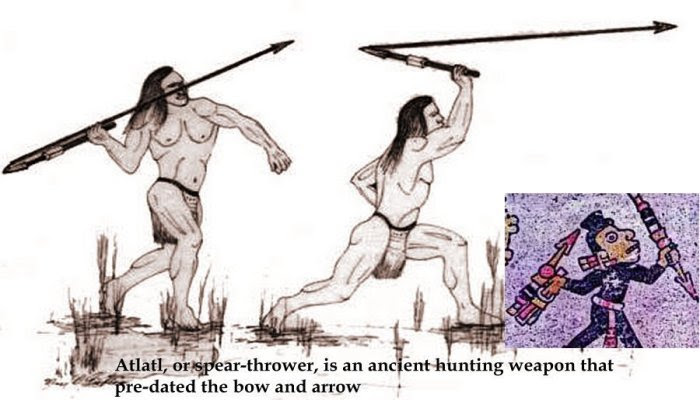 Generally, in the Aztec world, fine weapons were symbols of power and religious war. In the Nahuatl language of the Aztecs, the spear thrower was called ‘atlatl’ and was a symbol of warfare and magical power. Important Aztec gods were depicted holding ‘atlatl’, decorated with snake (or serpent) designs or feathers (symbolizing a bird of prey).

The ‘atlatl’ in a hand of the Aztec warrior disguised as Death, was used in a sacrifice of a captive tied to a scaffold. 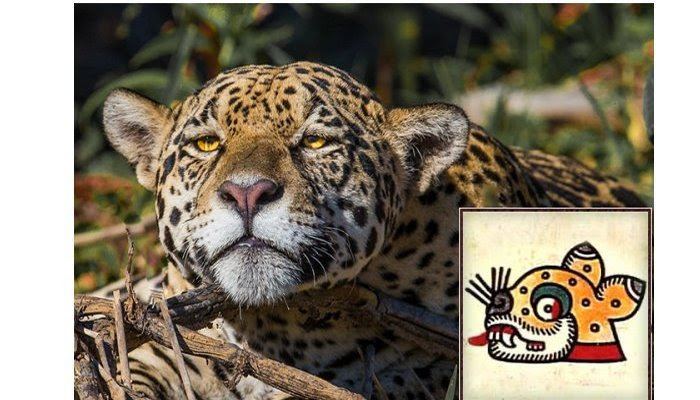 A jaguar, a fierce, brave hunter in ancient Mexico was the symbol of the Aztec elite warriors, the “Jaguars” as a jaguar was the largest beast of prey.3

It was a cult and shamanic animal figure associated with sacrificial ceremonies and offerings to the jaguar god and the Aztec god of warriors. Tezcatlipoca god (“Smoking Mirror”, in Nahuatl) is depicted as a jaguar with an eagle at his side and the Aztec Emperor had a throne of eagle feathers and jaguar skin.

The jaguar was also symbol of the 14th of the 20 day-signs of the Aztec calendar and was even aligned with the eagle and called the “jaguar of the skies.” Gods and kings wore the skins and feathers of sacred animals as status symbols. 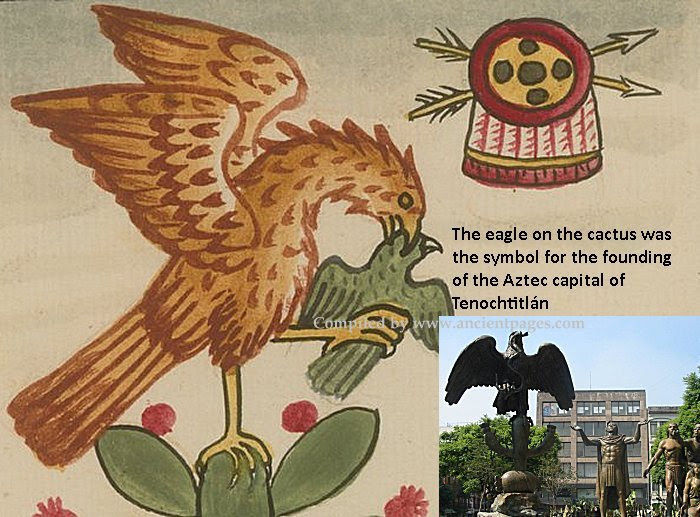 “Quauhtli” (eagle) is the 15th of the 20 days of the Aztec calendar, a symbol expressing warlike qualities in those born under this sign, but the sign also means a tendency to plunder and steal. Eagle, a symbol of power was also included in insignia of the Aztec capital Tenochtitlan. Today, the eagle statue in Mexico City still commemorates the foundation of Tenochtitlán but, the eagle has not a bird in its claw.

In the Aztec Empire, the eagle symbolized one of the two elite warrior groups (“eagles”) dedicated to the sun. The sun’s journey from night to day was a representation of an eagle’s flight.

As the eagle rises to swoop down on its prey, so does the sun; it rises and then swoops down and finally disappear. The eagle symbolized the largest bird, which was fearless, powerful and brave and so were the bravest men. This bird was a symbol of warriors. 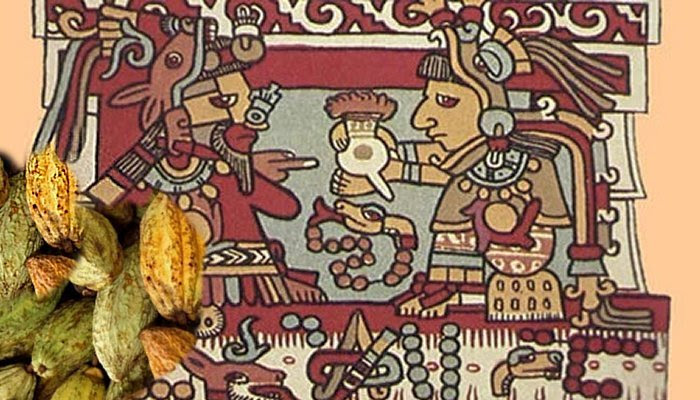 Chocolate was considered an aphrodisiac and symbolizes sensuality and decadence. It was the drink of the elite. For the Aztecs and the Mayan people, it was holy. The Aztecs used cocoa beans as a means of payment and drinking chocolate was reserved for the elite. It was symbol of political and social symbol for the empire. It was symbol of nobility and economic symbol in society. Drinking of chocolate signified ones wealth and status.

Even today, chocolate is seen as a luxury product. 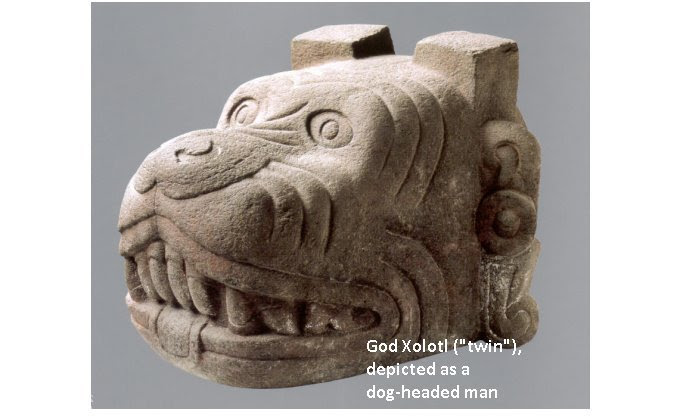 6. Dog – Guided To The Afterlife

In the 20-day calendar of the ancient civilizations of Central America the dog (in Aztec, itzcuintli) is the 10th day sign. The dogs in ancient Mexico, were buried along with the dead as sacrifices to them and as guides for the afterlife because they could take the dead across the “ninefold river” to the underworld.

Boys born under the sign of the dog were believed to be predestined to rule and to distribute prized gifts. The god Xolotl (“twin”), depicted as a dog-headed man, was associated with the sunset and would guard the Sun as it traveled through the underworld every night. 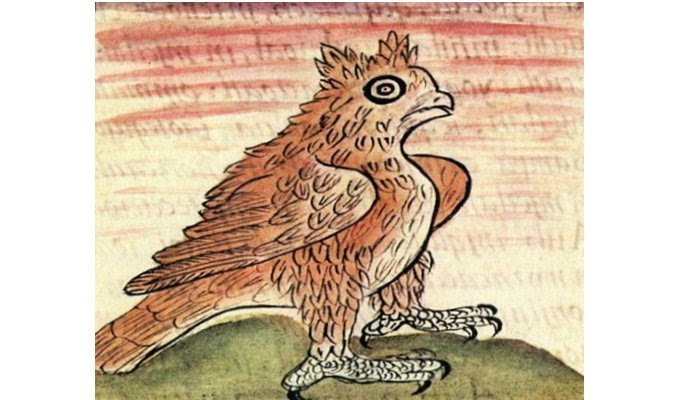 The Aztecs feared the owl and believed it was a bringer of death. It symbolized a demonic night creature represented dark shamanic forces. It appeared suddenly in the darkness and was always an evil omen.

Even today, this bird is believed to be a bad omen. Interestingly, in the pre-Aztec civilization of ancient Mexico (Teotihuacan), the owl was the sacred animal of the rain-god. Tlacolotl, the horned owl was a representation of the deepest evil to the Aztecs. Spanish friar Bernardino de Sahagun wrote that among omens and warning signs provided by birds and the owls were birds, which were considered messengers of the gods of death Mictlantecuhtli and Mictlantecuhuatl, often portrayed with owls.

These two feared gods called for people who were destined to live in their underground world, Mictlan. If an owl was heard above an Aztec home or from a nearby tree, it was a warning sign that someone would die soon or even lives of others would be endangered.

8. Monkey – Symbol Of The Calendar 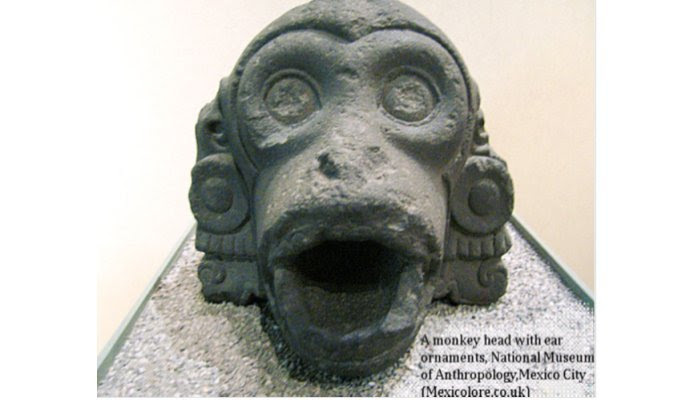 The ape is a calendar symbol in ancient Mexican cultures also, lending its name (in Aztec Ozomatii, in Mayan Ba’tz) to the 11th day of the month. The ape was a god of dance, celebration and those born under this sign were expected to become jugglers, dancers, pranksters, or singers.

An ancient myth of periodic “ends of the world” (or “the second era or “sun,”) says that everything ended by devastating tornadoes, and the humans of this era were transformed into apes. In the Aztec Sun Stone carved in 1478, the north is a warrior’s headdress symbolizing the military power of the aztecs (Mexica) and their developing empire. The south is a monkey and represents a part of the previous suns (ages)  according to the myth of creation. 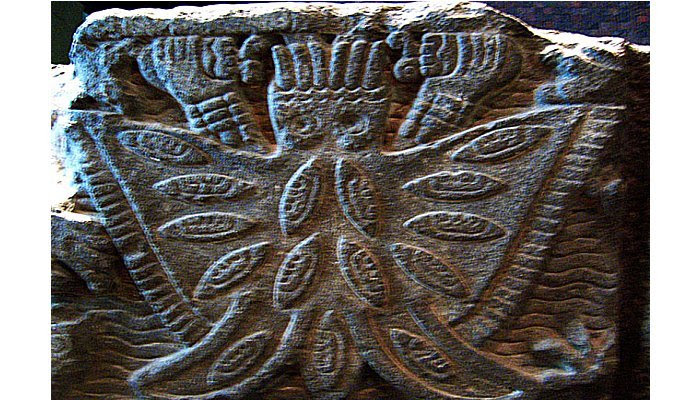 In ancient Mexico the butterfly (in Aztec papalotl, suggestive of the Latin papilio) was one of the attributes of Xochipilli, the god of vegetation, but also symbolized flickering firelight and was associated with the Sun. The Aztecs believed that the last breath of a dying person took the form of a butterfly. As the lifecycle of the butterfly (egg, larva, pupa and imago (adult) can be clearly observed, the Aztecs, therefore, gave this insect symbolic meaning of transformation.

Itzpapalotl (‘Obsidian Butterfly’ or ‘Clawed Butterfly’), a butterfly goddess surrounded by stone knives (so-called ‘itzli’), was a symbol of the souls of women who had died in childbirth. The souls of enemy warriors killed on the battlefield were like butterflies fluttering among flowers. The insect’s fluttering of wings (like the flickering of a flame) was linked to fire and the sun.

10. Maize – A Gift From God Quetzalcoatl 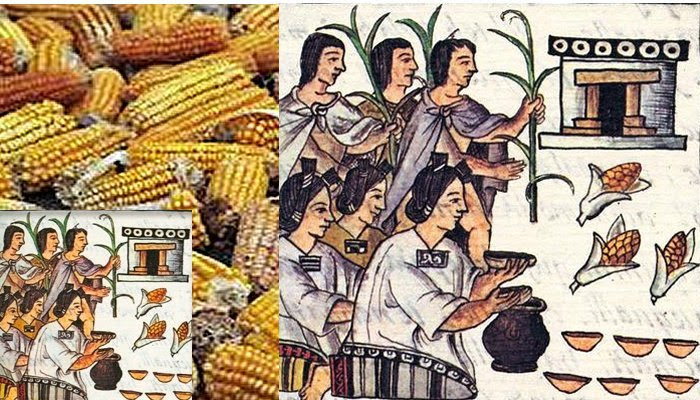 The Aztecs say the god Quetzalcoatl gave maize to humans. For over 5000 years maize has been one of the most important foods for people living in Mexico including the Aztecs. Maize was sacred to the Aztecs, who also worshiped the God of Maize. Maize was crucial to the Aztecs’ survival. Therefore, they celebrated different stages in the plant’s life with festivals and offerings. They gave these stages names and created images of them in stone and in paintings.
+

Tlaloc, god of rain who was important for agriculture, was depicted with the ears of corn.
Posted by arclein at 12:00 AM