How China can win a trade war in 1 move 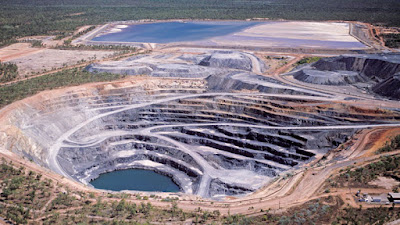 Sorry children, do not try this. The Canadian mining industry is soo ready for this eventuality.  The resultant price signals alone will mobilize the industry and in three months thousands of junior mining companies will have fresh money with which to scour the globe for easy to access deposits.


At the same time the global processing industry will lock up long term supply contracts and quickly establish facilities in preparation for the incoming supply.  Inside two years the Chinese can be locked out of the market and their competitors riding along with the support of government guarantees because of the emergency.  All through this desperate Chinese suppliers will be smuggling supplies to their customers.


Recall what happened to the monopoly held by De Beers on diamond exploration. Canada broke that twenty years ago and it has been a free for all ever since.


How China can win a trade war in 1 move

China will not be easily cowed in a trade dispute. Chinese President Xi Jinping is now exchanging threats of tit-for-tat tariffs with President Trump, who announced Thursday he's considering raising the stakes another $100 billion. China vowed to defend itself "at any cost."

Compared to the scale of the U.S. economy, the numbers are still relatively trivial and mostly theoretical. But if things do spiral into all-out trade war, it's worth noting China has a nuclear option.

These are elements like dysprosium, neodymium, gadolinium, and ytterbium. They aren't actually rare, but they do play crucial roles in everything from smart phones to electric car motors, hard drives, wind turbines, military radar, smart bombs, laser guidance, and more. They're also quite difficult to mine and process.


Basically, if China really wanted to mess with America, it could just clamp down on these exports. That would throw a massive wrench into America's supply chain for high-tech consumer products, not to mention much of our military's advanced weapons systems.

In fact, China isn't just America's major supplier of rare earth metals; it's the rest of the globe's major supplier as well. And in 2009, China began significantly clamping down on its rare metal exports. Once, China briefly cut Japan off entirely after an international incident involving a collision between two ships. This all eventually led to a 2014 World Trade Organization spat, with America, Japan, and other countries on one side, and China on the other.

That forced China to abandon its quotas. But it also shows China is willing to use its advantage in rare earth metals to play hardball if it's pushed far enough. And that's one of the main reasons observers are nervous.

All of which leads to the next question: How did we get into this mess?

Much of the story centers around Magnequench, an American company that emerged out of General Motors in the 1980s. It specialized in the magnets that account for most of the final components created from rare earth metals. But in 1995 Magnequench was bought out by a consortium that included two Chinese firms who took a controlling 62 percent majority share in the company. They also bought a big rare earth magnet plant in Indiana. Eventually, Magneuquench's manufacturing capacities were moved to China, and the Indiana plant was shut down.

Executive branch regulators do wield power over foreign investment in and buyouts of American companies, particularly through the Committee on Foreign Investment in the U.S. (CFIUS). But this was the post-Cold War 1990s, when optimistic enthusiasm for globalized free market trade was at a peak. CFIUS approved the initial takeover of Magnequench in 1995 under the Clinton administration, as well as the later shutdown of the Indiana plant in 2003 under the Bush administration.

Lawmakers and the Government Accountability Office criticized the agency and both administrations for their lackadaisical approach to the issue. Hillary Clinton even struck a rather Trump-ian note in 2008, trying to turn Magequench's sale to China into a campaign issue. But it was a tricky topic, given how her husband's administration got the ball rolling. So rare earth metals have occasionally turned into a political hot potato, but usually for only brief periods.

But there's another side to this story: the rare earth Mountain Pass mine in California.

America's problem has never been a lack of rare earth deposits — it has plenty. The problem has been maintaining a domestic industry to mine the minerals and transform them into final components. For a while, Colorado-based Molycorp made a go of mining rare earths at Mountain Pass. But it struggled to turn a profit, and eventually went bankrupt. In the middle of last year, a bankruptcy proceeding sold the mine to another China-involved consortium. The Chinese partner in the consortium, Shenghe, will have exclusive sales rights to the mined product for a period of time, according to sales documents.

That brings us up to date, and on to the final question: How do we fix things?

Free market types like to focus on environmental regulations. Mining rare earth metals is a nasty business, with a lot of chemical and radioactive byproducts. Properly disposing of that detritus is extremely costly, which makes mining rare earth metals for profit hard. In fact, regulators closed the Mountain Pass mine and fined it at one point for skirting the rules.

Of course, Molycorp was also badly damaged by the massive price swings brought on by China imposing and then ditching its export quotas.

But regardless, blaming the hippies for America's rare earth metal woes is doubling down on a bad strategy. Blinkered enthusiasm for free market solutions is how we lost domestic operations in the first place. Furthermore, China itself solved the environmental problem by just not caring, and created dystopian wastelands in the process.

If proper production of rare earth metals is too expensive for private profit, then government should step in. Either subsidize domestic industry, or nationalize it through direct industrial policy. Lots of companies are hard at work trying to find alternatives to rare earth metals as well, and we could be pouring public investment into that research.

It would've been great if policymakers hadn't been asleep at the regulatory wheel in the 1990s. But that's done, and now it will take a lot of time and resources to ratchet domestic rare earth metal capacity back up. Nuclear power is an instructive analogue: Regulatory and insurance costs are an enormous burden to that industry as well. But France, for instance, did not build its vibrant nuclear power capacity by cutting government red tape and "letting markets work." It achieved it through massive government spending and central planning.

It's easy to paint China as a villain here. The country does ride the uneasy line between ally and adversary. And it certainly wasn't prudent to allow China to corner the rare earth metal market. But ultimately China is just a hard-nosed global player, pursuing what it sees as its national interest. They've also taken a non-ideological approach to economics over the last few decades, picking market-based tools and big government policies as they see fit.

By contrast, America spent the same time period getting high on its own free market supply.
And now it might just suffer the consequences.
Posted by arclein at 12:00 AM