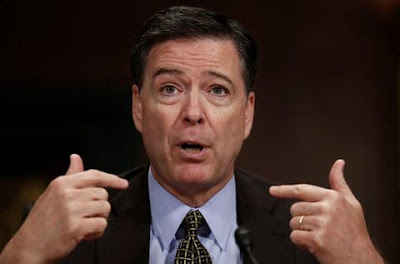 I think that this is an admission of guilt.  A stretch i know and it is negative evidence as well.  It is just that this was the most important fact about that dossier. The level of imputed bias was catastrophic to any possible use of the material and the victim needed to know this in order to take the proper corrective steps.  Comey chose to prevent that actually happening.
Of course we can always blame bad judgement, a Comey forte.
The whole narrative has long since collapsed and only fools believe any of it.  Yet it is been allowed to drag on like Banquo's ghost.  I now suspect this is deliberate along with the Mueller investigation.  do recall that a number of admin types are also placemen put in place to allow Intel gathering and to allow key placement later.  Much of that has already been seen through.
It is obvious that the whole Dem FBI team has been allowed to hang in the wind for a slow transition while all those indictments were gathered.   That may well include Mueller.
.
.
Comey Failed To Tell Trump Hillary Paid For Dossier

Former FBI Director James Comey admits in an upcoming ABC interview with George Stephanopoulos that he never told President Trump that the infamous unverified Steele Dossier was paid for in part by Hillary Clinton. Comey notified Donald Trump in the fall of 2016 that the FBI had received "materials" alleging deviant behavior and financial misconduct tied to Russia.


The "Steele Dossier," created by former MI6 spy Christopher Steele on behalf of Clinton-commissioned opposition research firm Fusion GPS, was notably used as the basis for a Foreign Intelligence Surveillance Court (FISA) warrant to spy on Trump campaign associate Carter Page (and presumably, via unmasking, anyone he communicated with) as part of a sweeping, ongoing counterintelligence operation which began during the 2016 election.


Curiously, the FBI refused to pay Christopher Steele $50,000 when he couldn't verify claims within the dossier, yet the agency felt that it was fit to use in a FISA warrant application and bring to Donald Trump's attention.

When Comey was asked by Stephanopoulos whether or not he thought President Trump should know about the origins of the salacious and unverified dossier, the former FBI Director simply replied "I don't know the answer to that."

"Did you tell him that the Steele dossier had been financed by his political opponents?" asks ABC News anchor George Stephanopoulos.

"But did he have a right to know that?" continued Stephanopoulos.

"That it had been financed by his political opponents? I don't know the answer to that," Comey said.


Fired FBI Director Comey admits that he never told President Trump the Steele dossier was funded by the DNC.


Comey also said that he "wasn't sure" about a claim in the dossier that in 2013, Donald Trump hired prostitutes to urinate on a bed that President Obama had slept in.


As Kate Pavlich of TownHall points out, Hillary Clinton initially denied knowing anything about the dossier.


Hillary Clinton was unaware of the now-infamous dossier of allegations about Donald Trump and Russia prior to Buzzfeed's publishing of the document earlier this year, a source familiar with the matter has told CNN.


Clinton was disappointed that the research from the document was not made public before she lost the 2016 election, the source said. -TownHall


Then, when reports emerged that Clinton actually funded part of the dossier - "she and her team justified the move as "opposition research," writes Pavlich.


Not surprisingly, Clinton misrepresented the original hiring of Fusion GPS by a Republican donor. That donor was Peter Singer, who hired the firm on behalf of the Washington Free Beacon to do research on all of the GOP candidates during the primary, including Trump. Fusion GPS did not employ Christopher Steele, a British spy, to do any of this work. When the Clinton campaign hired Fusion GPS after Trump won, Steele was hired and worked with Russian officials to come up the infamous and salacious dossier.


Keep in mind the Clinton campaign and DNC officials have denied paying for the dossier for nearly a year, but were forced into an admission after a subpoena from House Intelligence Chairman Devin Nunes revealed both entities had in fact employed Fusion GPS to create the dossier. -TownHall