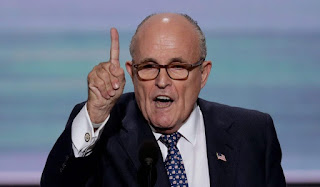 This is inspired.  We now have the man on the team who is quite able to run off the Mueller circus along with all the legal sideshows that others want to perpetrate such as Stormy Daniels.

It may not be the end of the ongoing harassment but it now sets a new tone that will be even more aggressive than Trump if that is possible.  It will only take a couple of counter suits to put the meddlers in their place.

It has taken time but what is slowly but surely emerging is a cohesive Trump Team that will intimidate everyone while been even cohesive.
.


In an interview with CNN, Giuliani said he wants to make clear that his role on the legal team will be "limited."

Giuliani told CNN his focus will be on interfacing with special counsel Robert Mueller in his Russia probe and to help bring everything to a conclusion, saying it "needs a little push."

Mueller is investigating Russian meddling in the 2016 election, including any potential ties between the Trump campaign and Russia. Trump has repeatedly denied any collusion.

Giuliani, who spoke to CNN on the phone soon after news broke about his role, was careful to praise Trump's current legal team, but he said that sometimes it helps to bring on a fresh perspective.

Giuliani also noted that he has known Mueller for a long time. They worked together in the Justice Department as well as when Mueller was FBI director and Giuliani was New York's mayor.

Giuliani said he is going to get a list from Mueller of what is needed to "comply" with the rest of the investigation as soon as he can, and depending on what is on the list, that compliance might go quickly, even as soon as "a couple of weeks."

Giuliani pushed back on the idea that Trump ever had any intention of firing Mueller. He said the President never gave him any indication he was considering such a move because he knows it would be "counterproductive." Dismissing Mueller would mean the investigation would take longer, Giuliani said, adding that "Bob is the best we can do" and saying he is fair.

Trump's legal team has faced difficulty finding lawyers willing to join them in defending the President in the Russia probe.

CNN previously reported that after the departure of lawyer John Dowd from the team, five large law firms passed on the opportunity to represent Trump.

Well-known Washington lawyers cited several reasons for declining to join the President's team, CNN reported in March, citing multiple sources familiar with their decisions. Among them, Trump appears to be a difficult client and has rebuked some of his lawyers' advice. He's perceived as so politically unpopular he may damage reputations rather than boost them. Lawyers at large firms fear backlash from their corporate clients if they were to represent the President. And many want to steer clear of conflicts of interest that could complicate their other obligations.

A source familiar said part of the reason for Giuliani joining the team was the departure of Dowd.

"John Dowd left abruptly and put Sekulow in a hole. He needs white-collar support," the source said.
Giuliani's law firm, Greenberg Traurig, announced Thursday that he would be taking leave.

"Mr. Giuliani is taking a leave of absence, effective today, for an unspecified period of time to handle matters unrelated to the law firm or its clients," said a statement from Richard A. Rosenbaum, the firm's executive chairman.

Giuliani was a prominent supporter of Trump's presidential bid, and according to two sources, Giuliani was at the President's resort in Mar-a-Lago this week. One source said Trump and Giuliani had a 30-minute interaction while they were there.

"I am announcing today that former New York City Mayor and United States attorney for the Southern District of New York Rudy Giuliani is joining the President's personal legal team," Sekulow said in a statement, adding that Trump said Giuliani is "great" and has been his friend "for a long time."

Sekulow's statement said Giuliani said in a statement: "It is an honor to be a part of such an important legal team, and I look forward to not only working with the President but with Jay, Ty, and their colleagues," a reference to White House special counsel Ty Cobb.

Sekulow also announced two others would be joining the legal team in addition to Giuliani -- Jane Serene Raskin and Marty Raskin -- attorneys from a white-collar criminal defense firm based in Florida.

The Raskins are not commenting about joining the Trump team.
Posted by arclein at 12:00 AM