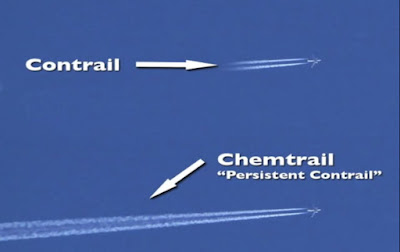 Let us get this over with.  Various aerosols are been spread in the atmosphere and no attempt has been ever made to get informed consent because that would never happen.  And do you really think Hitler got informed consent regarding Jewish extermination?

And of course that is the point when we have a program without informed consent.  We know that there will be issues and safety is a hard sell here.

I personally am not inclined to be too concerned simply because we are in nature continuously hit with all sorts of nasties which we handle quite nicely, let alone stuff that is generally benign as all this stuff pretty well is.  After all none of us will ever roll around in a tank of this stuff.

I would still like to see the science published and i do hope that none of this is in support of the discredited global warming narrative.  .

NASA Confesses To Dosing Americans With Air-borne Lithium And Other ChemicalsAUGUST 6, 2016

If you don’t know about chemtrails by now or if you are a skeptic, we have various articles on the subject that you should check out here. Recently a video has been circling around of a NASA employee admitting that lithium is being sprayed in the atmosphere.
For a few years now a video has been making its rounds online in which woman is speaking with a NASA employee that admits NASA has been using lithium in the air. This is not something NASA has hidden, and they actually have a few posts about it on their actual website.
Now, chances are if you have been following Awareness Act for a while, you already know all about chemtrails, but this is going to be a little different. These are called vapor tracers and they are injected into the upper atmosphere so that we can better understand our planet itself.
Depending on the type of vapor being dispersed the vapor clouds could be different colors. The ones that happen to be lithium light up red at night. Lithium vapors are also quite visible during the day and usually appear as a bright narrow band. All you need to see this is an infrared filter.
Other vapors released include chemicals such as barium and tri-methyl aluminum. While NASA has said time and time again that these things are not harming the population and that we are not getting any effects from them, many do not believe this.
The NASA employee from the video that I mentioned above, is Douglas Rowland. Rowland is an astrophysicist in the Space Weather Laboratory of the Heliophysics Division at NASA Goddard Space Flight Center. He works in several different areas of research including research on the Earth’s Magnetosphere, Thermosphere, and Ionosphere. This meaning he most likely sees data from these tracers through his work.
While these tracers are found much higher in the atmosphere than chemtrails would be. If you look on NASA’s website they actually have an article covering an instance from 2013 in which they produced two lithium vapor trails and it goes on to say that they would be creating more lithium trails later on in the year as they had two more missions to go. You can find articles from reliable sources all over covering these tracers and NASA ‘lighting up the sky,’ while most people do not pay attention to what is lighting up the sky being aware is important. These things are going on right before our eyes, they are no secret. We are just not paying attention.
You can click here to read about an instance of these tracers being released from just this past year by clicking here. Tracers like this have been released into the atmosphere for a very long time. This has been done since the 1950s and is not going to stop anytime soon. My main concern is whether or not some of these vapors are making their way back down to us. For anyone who may not know Lithium is a medication prescribed for the most part to those with bipolar disorder and other things of the sort.
Lithium effects everyone differently and for some those effects are not good. Now, the video I am going to add below that I went over above is in regards to something known as the Lithium Thermite Test Flight that was basically releasing more lithium vapor in order to test new canisters. This being something that has happened time and time again.
It was called Code 840 RMMO and states that the purpose of using Wallops Flight Facility to launch a rocket containing lithium thermite is as follows:
“Purpose: The primary purpose of this mission was to test the loading methods for lithium canisters to be flown on the upcoming Kudeki (Kwajalein, April 2013) and Pfaff (Wallops, June 2013) missions, and verify their functionality under sounding rocket launch and space flight conditions.
Rocket Type: Two-stage Terrier MK70 Improved-Orion
Location: Wallops Range
Launcher: MRL
Date of Launch: January 29, 2013
Time: 17:50 EST
Experiment results: Thermistor data looked nominal. Good report from an airborne optical platform of recorded video and lithium clouds also visible by ground observation.”
Sure, a lot of people are not concerned with things like this but we should all be. Whether it be chemtrails, tracers, aerosol injections or whatever form is being used it is going to effect us in some way whether NASA or otherwise wants to admit it or not. Please check out the videos below for more information.
Posted by arclein at 12:00 AM