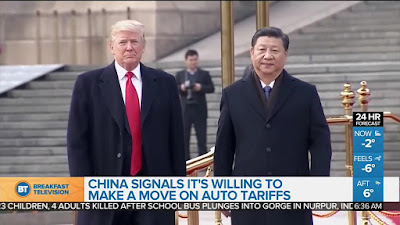 Eventually folks will get used to Trump's negotiating style.  He always starts by lowering the boom however irrational.  Negotiations begin which was the whole point after all and something acceptable gets hammered out.  It just happened with China.  From this watch Japan come to its senses as well.

It should also be obvious by now that he has empowered negotiations worldwide in order to correct unbalanced relationships.  This makes complete sense to do now while you are also cleaning house.  Forward agreements come after all that is well completed.  Just today we have close agreement already in the offing on NAFTA.  Recall that?  And yes it certainly needed to be tweaked.

It would all be funny if you are not on the receiving end of the smoke cloud.

Otherwise I want to say something important.  The MSM or main stream media is now attempting to get off their implied alliance with the so called Progressives.  Somehow finding that 70% of the American public does not trust them finally hit home.  This coincides with Trump's actual percentage of the 2016 popular vote soon to be announced. Their news programming is impacting their whole business and Roseanne's triumphant return to prime time hammered the point home.  My first clue came with that so called article couched as a conspiracy theory expose which laid out the evidence front to back.  No one thought that any of at was a conspiracy theory but we will pretend wouldn't we.

You get my point.  When you really have to tell your readers what they are hearing everywhere is the truth, you play it this way.  Gee, we heard this horrible rumor that France has fallen to the Nazis.  Sorry to bother you with this.

Thus we see a Syrian Gas Attack that makes zero sense and this crazy raid on Trump's lawyer that surely makes the whole legal process impossible.  How desperate must the Deep State be?

The MSM are not Trump cheerleaders yet, but sorry folks, that is a comin'  and quite likely by the end of the midterm destruction of remnants of the Opposition in fair elections or immediately after.

@Snowden
Yes.
Testify then drop.
We have it all.
These people are stupid.
Fireworks.
POTUS’ weekly address.
END.
Q

Who is standing next to Pence & POTUS?
Message?
Bolton cleaning house.
Out they go!
A clean House is very important.
Q

First word in the article is
CHONGQING, viz.:

CHONGQING, China — For more than a decade, Chinese automakers have been talking about starting large-scale exports to North America and Europe, prompting periodic worries in the West that companies like General Motors, Ford and Volkswagen might be crippled by Chinese competition the way they were by Japanese imports a generation ago….