Pruitt insists EPA only use data that is public. No more secret science. 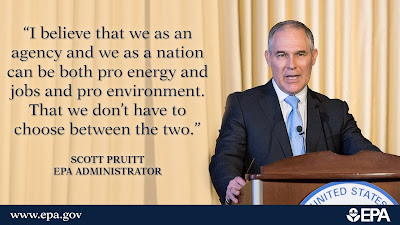 That this was even possible puts large sectors of the scientific community into deep disregard and quickly reduces science to witchcraft.  The known public science is troubled enough let alone giving every shyster a free pass.

Let me see now.  This must be acceptable. 'my highly accredited team of geoscientists have carefully evaluated the available science and have determined that the grade of our gold mine is spectacular and must enrich all share holders greatly'.  It comes down to just that folks.

We have had the decade long Global Warming Deceit in which critical claims were made while holding back the data.  This then proved to be an exercise in cooking the data long past any timeliness issues.  Following that data soon led to concerned researchers who did the work properly and discovered the data manipulation.

Yet no one goes to jail for any of this.

At least common sense has arrived back at the EPA and we will no longer be subjected to agenda driven decision making.


Pruitt launches science bomb: insists EPA only use data that is public. No more secret science.
In a bombshell, Scott Pruitt is expecting scientists to act scientifically.
http://joannenova.com.au/2018/03/pruitt-launches-science-bomb-insists-epa-only-use-data-that-is-public-no-more-secret-science/

In the US the EPA has been making rules that cost billions based on studies from groups that refused to publish their data. Regulations like The Clean Power Plan were estimated to cost $8.4 billion and magically return $14 – $34 billion in “health and climate benefits”. Scott Pruitt plans to pop that bubble.


Environmental Protection Agency (EPA) Administrator Scott Pruitt will soon end his agency’s use of “secret science” to craft regulations.
“We need to make sure their data and methodology are published as part of the record,” Pruitt said in an exclusive interview with The Daily Caller News Foundation. “Otherwise, it’s not transparent. It’s not objectively measured, and that’s important.”
“If we use a third party to engage in scientific review or inquiry, and that’s the basis of rulemaking, you and every American citizen across the country deserve to know what’s the data, what’s the methodology that was used to reach that conclusion that was the underpinning of what — rules that were adopted by this agency,” Pruitt explained.
My only minor, tiny, complaint is that there is no such thing as “secret science”. If it can’t be replicated, it isn’t science. What Pruitt is stopping is Fake Science.

The Union of Concerned Scientists immediately leapt to defend the right of certified scientists to issue declarations that no one could test or assess.


“A lot of the data that EPA uses to protect public health and ensure that we have clean air and clean water relies on data that cannot be publicly released,” Union of Concerned Scientists representative Yogin Kothari told E&E News.
“It really hamstrings the ability of the EPA to do anything, to fulfill its mission,” Kothari said.
Evidently, the Union of Concerned Scientists aren’t too concerned about whether “scientists” are acting scientifically. Like all unions, what matters is pay, power and working conditions, never mind about the Scientific Method.

In the Australian version, the BoM swamps skeptics with data, but admits it keeps its methodology secret. Only fully trained members of the sacred guild can play data games and issue prophesies.


Tellingly, environmentalists and democrats oppose the idea of transparent data.