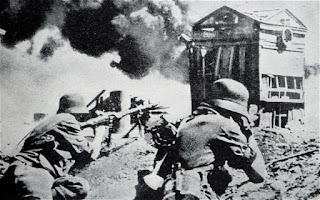 This is worthwhile as it is not obvious at all.  Sustained stress causes huge physical damage to the bone marrow and the heart and obviously elsewhere also.

The immediate take home is one we know already and that the period of time needs to be closely managed.  This also has strategic impact.  You must allow for a rapid rotation of troops in battles that has not been thought through enough before.  Continuous battle is simply unsustainable.

Most historical conflicts ended quickly and even sieges  contained the actual violence though that was close to the conditions possible in modern conflict..

Why was the German High Command shocked at the high death rate of 6th army soldiers in Stalingrad from natural causes?

Soldiers in their late teens and twenties simply keeled over dead. They didn’t die of war wounds or starvation. They died of the effects of prolonged stress.

The High Command shouldn’t have been surprised at this development. They learned, but had forgotten what they learned from their experience with Red Army soldiers. Tens of thousands of Red Army POWs keeled over dead for no obvious reason.

Examination of the POW corpses revealed inflamed and enlarged hearts.

These were young men who didn’t die from battle wounds. They died of prolonged stress. Extreme stress caused physical changes in the heart which brought on heart attacks.


The German army, which by this time was short of men, kept the Red Army POWs alive to supplement their manpower. They used them to move supplies, build roads, clear minefields etc. Yet, many thousands of these young and healthy men died of natural causes: Heart failure brought on by stress.


The High Command became very disturbed by the death of so many ill-replaceable 6th army soldiers with no obvious cause. To determine the cause they sent doctors to Stalingrad to conduct autopsies on the frozen corpses.

After thawing these bodies they conducted the autopsies.

The bone marrow instead of having the normal red color was clear and filled with waxy liquid. The hearts were inflamed and enlarged on one side.

Their conclusion: Death from heart failure due prolong stress.

Many of these deaths happened before the 6th army became surrounded and trapped. These natural deaths increased during the final weeks due to cold and starvation. These factors added to the prolonged stress as did the thought of death in the not too distant future.


Note: A concentration camp and Soviet gulag survivor told me that people don’t get sick from NOT eating enough. He said people get sick from eating too much.


Although starvation at Stalingrad was extreme over 91,000 Germans surrendered. Many survived the starvation of the last 2 months.
Posted by arclein at 12:00 AM