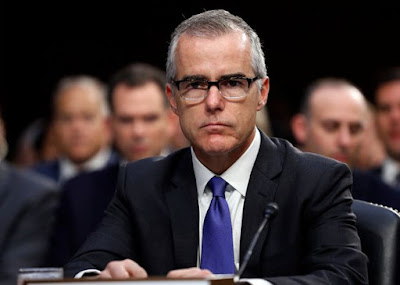 How he thought he could keep his job escapes me.  Yet this is likely business as usual also and that should be deeply troubling.

The fact on display is that justice is manipulated at the highest levels for political purposes and at the demand of political actors who make it the price of position.  Hilary's problem was not that this was possible, but that she lacked all sense of proportion and created the ballooning scandal that revealed it all.

Most of these folks do know enough to never really push the envelope. Even a steady practice of petty criminality can be hidden and often is.  Yet there comes the point in which the scale will out all.   We have reached that point in the USA.

Recall how skillfully the pedophile conspiracy operated.  A child in this town and then another across country never really coming back for a generation at least ensuring hands on experience is lost.  No cop shop learns how to handle the problem or even identify it and all that is left is rumors.

I know we are all in a hurry but 25000 indictments means a massive expenditure in investigative hours.  So in the meantime we watch the public show of the FBI disgrace and its reform.

On Friday, the Office of Inspector General Michael Horowitz of the Department of Justice released the investigative report of the actions of former FBI Deputy Director Andrew McCabe that led to his firing. Inspector General Michael Horowitz referred to McCabe’s false testimony, made under oath, to the FBI Office of Professional Responsibility (OPR). After a review of the investigation, and discussion with McCabe, OPR recommended to Attorney General Jeff Sessions that McCabe be fired from the FBI. The report came while much of establishment media was focused on the upcoming publication of a tell-all book penned by former FBI Director James Comey, who Trump fired in January 2017. More revelations are expected from forthcoming reports from the OIG.

DOJ just issued the McCabe report - which is a total disaster. He LIED! LIED! LIED! McCabe was totally controlled by Comey - McCabe is Comey!! No collusion, all made up by this den of thieves and lowlifes!

According to IG Horowitz, McCabe improperly leaked information to a Wall Street Journal reporter to shape a narrative concerning his role in an investigation into Hillary Clinton’s secret emails from her time as Barack Obama’s secretary of state. Investigators for the IG said that the 2016 leak thus confirmed that there had been an investigation the FBI has been silent on. The IG concluded that McCabe’s leak was done “to advance his personal interests.” McCabe then lied to erstwhile FBI Director James Comey, and to FBI agents subsequently investigating his actions. The IG report contends that McCabe, when questioned by the IG and FBI agents in May and July 2017, “contradicted his prior statements.”

The IG report, which may devastate McCabe’s credibility, noted that McCabe was under oath when he made false statements to FBI agents. Having circulated with government circles for weeks, the IG report was used as grounds for McCabe’s dismissal, just days before his retirement and take his pension.

A timeline of events regarding McCabe:

•May 2017: McCabe denies leaking material to the Wall Street Journal about a story on FBI investigators.

•July 2017: FBI attorney Lisa Page admits to IG Horowitz that she was told to put together a story for WSJ journalist Devlin Barrett. This conflicts, however, with repeated denials by McCabe.

•August 2017: Once Horowitz has verification of McCabe’s misstatements, McCabe says he “may have allowed FBI officials to speak with the newspaper.”

•August 2017: FBI interviews McCabe again on the basis of his new admissions.

•November 29th 2017: On the day before Special Counsel Robert Mueller indicts former National Security Adviser Michael Flynn, IG Horowitz re-interviews McCabe. McCabe may have admitted at this time to having constructed the leak.

May - July, 2017: While McCabe was allegedly giving false statements to FBI investigators and the Inspector General, Page was working for McCabe as his legal counsel.

“The OIG found that then-Deputy Director Andrew McCabe lacked candor, including under oath, on multiple occasions in connection with describing his role in connection with a disclosure to the WSJ, and that this conduct violated FBI Offense Codes 2.5 and 2.6,” the IG report said. “The OIG also concluded that McCabe’s disclosure of the existence of an ongoing investigation in the manner described in this report violated the FBI’s and the Department’s media policy and constituted misconduct.”


James Comey is a proven LEAKER & LIAR. Virtually everyone in Washington thought he should be fired for the terrible job he did-until he was, in fact, fired. He leaked CLASSIFIED information, for which he should be prosecuted. He lied to Congress under OATH. He is a weak and.....


Outgoing chairman of the House Oversight and Government Reform Committee Rep. Trey Gowdy (R-SC) said on Friday that the IG report offers justification for McCabe’s dismissal. He said that he and his committee will continue to investigate the FBI and its probes into the 2016 election. “This report continues to call into question decisions made by FBI leadership in 2016 and 2017, which is why the Oversight and Judiciary Committees will continue our joint investigation into the matter.”


....untruthful slime ball who was, as time has proven, a terrible Director of the FBI. His handling of the Crooked Hillary Clinton case, and the events surrounding it, will go down as one of the worst “botch jobs” of history. It was my great honor to fire James Comey!


White House press secretary Sarah Huckabee Sanders said on Friday tht McCabe and his f Comey deserve ignominy. “It sounds like two peas in a pod, McCabe and Comey,” Sanders said and added that McCabe was “fired in disgrace.”

However, Democrats argued that the two issues are unrelated.

“We found that, in a conversation with then-Director Comey shortly after the WSJ article was published, McCabe lacked candor when he told Comey, or made statements that led Comey to believe, that McCabe had not authorized the disclosure and did not know who did. This conduct violated FBI Offense Code 2.5 (Lack of Candor – No Oath).

“We also found that on May 9, 2017, when questioned under oath by FBI agents from INSD, McCabe lacked candor when he told the agents that he had not authorized the disclosure to the WSJ and did not know who did. This conduct violated FBI Offense Code 2.6 (Lack of Candor – Under Oath).

“We further found that on July 28, 2017, when questioned under oath by the OIG in a recorded interview, McCabe lacked candor when he stated: (a) that he was not aware of Special Counsel having been authorized to speak to reporters around October 30 and (b) that, because he was not in Washington, D.C., on October 27 and 28, 2016, he was unable to say where Special Counsel was or what she was doing at that time. This conduct violated FBI Offense Code 2.6 (Lack of Candor – Under Oath).

“Lastly, we determined that as Deputy Director, McCabe was authorized to disclose the existence of the CF Investigation publicly if such a disclosure fell within the “public interest” exception in applicable FBI and DOJ policies generally prohibiting such a disclosure of an ongoing investigation. However, we concluded that McCabe’s decision to confirm the existence of the CF Investigation through an anonymously sourced quote, recounting the content of a phone call with a senior Department official in a manner designed to advance his personal interests at the expense of Department leadership, was clearly not within the public interest exception. We therefore concluded that McCabe’s disclosure of the existence of an ongoing investigation in this manner violated the FBI’s and the Department’s media policy and constituted misconduct.”

Late on Friday, Michael R. Bromiwh -- an attorney who is counseling McCabe -- released a statement that said, "We have for some time been actively considering filing civil lawsuits against the President and senior members of this administration." In a tweet, Bromwich stated that he is "actively considering" a defamation suit against Trump.


Thank you for providing even more material for the defamation suit we are actively considering filing against you and your colleagues. Stay tuned.

Bromwich is a former Inspector General of the Department of Justice is no fan of the president. He also directed fire at several prominent attorneys, including life-long Democrat and distinguished Harvard Law professor Alan Dershowitz, in a statement on Twitter.

Dershowitz to Hannity: A special counsel can 'manufacture crimes against anybody'

Attorney Alan Dershowitz on Wednesday argued that a special counsel "can find evidence to create or manufacture crimes against anybody" in an interview with Fox News host Sean Hannity.
thehill.com


Former FBI director James Comey's memoir, "A Higher Loyalty: Truth, Lies, and Leadership," is due to be released on Tuesday. The book offers details about Comey's interaction with Trump during his time as FBI director. In the book, Comey unleashes personal attacks on Trump.