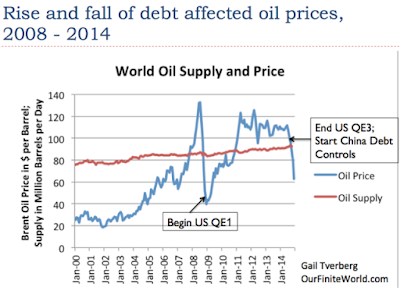 I tend to be terribly pessimistic regarding the present financial system which was partially handled but never reformed implying that all weakness remain in place. The worst weakness is that they threw a portion of the middle class in the USA into the ditch when that is who should have been supported.

It is now too late to change that and we have a sharply under financed consumer section as a consequence.  All this leads inevitably to capital asset contraction because we lack sufficient growth in the middle clasc itself.  Just who do you think buys everything and directly and indirectly creates wealth?

Recall that all land is worthless wilderness if there are no home buyers to provide price points. Ask Detrroit.

Instead financial policy has actually weakened the middle class in several ways since Clinton ended the separation of banks and brokers in 1998 which was the original sin..

.
Top Economist - Who Predicted the 2008 Crash - Confirms What Alternative Financial Sites Have Been Saying for a Decade

The global financial system has become dangerously unstable [he's right] and faces an avalanche of bankruptcies that will test social and political stability .... [Uh-huh]

"The situation is worse than it was in 2007. [Accurate] Our macroeconomic ammunition to fight downturns is essentially all used up" .... [True]

"Debts have continued to build up over the last eight years and they have reached such levels in every part of the world that they have become a potent cause for mischief," he said.  [Indeed]

"It will become obvious in the next recession that many of these debts will never be serviced or repaid, and this will be uncomfortable for a lot of people who think they own assets that are worth something" [Yup]

"The only question is whether we are able to look reality in the eye and face what is coming in an orderly fashion, or whether it will be disorderly. Debt jubilees have been going on for 5,000 years, as far back as the Sumerians." [Exactly!]

The European banking system may have to be recapitalized on a scale yet unimagined, and new "bail-in" rules mean that any deposit holder above the guarantee of €100,000 will have to help pay for it. [Unfortunately.]

"Emerging markets were part of the solution after the Lehman crisis. Now they are part of the problem too," Mr White said. [Could be bad.]

Mr White, who also chief author of G30's recent report on the post-crisis future of central banking, said it is impossible know what the trigger will be for the next crisis since the global system has lost its anchor and is inherently prone to breakdown. [Due to such factors as soaring leverage, incestuous levels of interconnectedness between financial institutions, runaway inequality, a government policy of letting criminals get away with fraud, etc.]

Mr White said QE and easy money policies by the US Federal Reserve and its peers have had the effect of bringing spending forward from the future in what is known as "inter-temporal smoothing".  [Very true.] It becomes a toxic addiction over time and ultimately loses traction. In the end, the future catches up with you. "By definition, this means you cannot spend the money tomorrow," he said.

"Policy makers were seduced into inaction by a set of comforting beliefs, all of which we now see were false. They believed that if inflation was under control, all was well," he said. [Hmmm...]

In retrospect, central banks should have let the benign deflation of this (temporary) phase of globalisation run its course. By stoking debt bubbles, they have instead incubated what may prove to be a more malign variant, a classic 1930s-style "Fisherite" debt-deflation. [Oops.]

"It was always dangerous to rely on central banks to sort out a solvency problem when all they can do is tackle liquidity problems [Wrong diagnosis]. It is a recipe for disorder, and now we are hitting the limit," he said.

Indeed, it's not just the past decade ... the mainstream has willfully ignored key economic wisdom which is hundreds or thousands of years old.