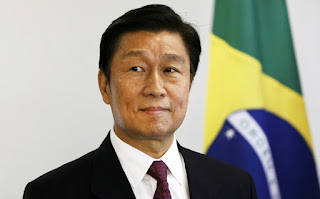 It sounds easier than it is of course and it also sounds like many a promoter who wants to staunch the bloodshed.  At least government can fund it.  It is going to be an interesting experiment and it will deserve close study.  In the past, the problem has always been the lack of money as what it entails is setting a floor under the market.

I do have suggestions, having worked through similar situations, but then that is not necessary here at this time.

It would be wonderful if this worked out well. At least someone is trying unless he is jawboning.

China is willing to keep intervening in the stock market to make sure a few speculators don’t benefit at the expense of regular investors, China’s vice president said in an interview.

Calling the country’s market “not yet mature,” Vice President Li Yuanchao said the government would boost regulation in an effort to limit volatility.

“An excessively fluctuating market is a market of speculation where only the few will gain the most benefit when most people suffer,” Li told Bloomberg News after arriving at the World Economic Forum’s annual meeting in Davos, Switzerland. “The Chinese government is going to look after the interests of most of the people, most of the investors.”

Li, 65, is the most senior Chinese official yet to underline the government’s readiness to intervene should the market turmoil of last summer and the start of 2016 continue. So far this year, the Shanghai Composite and the Hang Seng China indexes have both lost more than 15 percent, even as the central bank injects cash into the system to drive down borrowing costs and boost the economy.

Li, who sits on China’s 25-member Politburo, led a delegation to Davos looking to offerreassurances about the health of an economy that grew last year at its slowest pace since 1990. Speaking in an interview with Bloomberg Television from the World Economic Forum, billionaire investor George Soros said a hard landing for China’s economy is “practically unavoidable”.

Investors have raised questions about the government’s credibility after a series of reversals, including a decision to abandon a stock circuit-breaker system after plunging prices twice halted trading for the day earlier this month.

“On the one hand, we need to make the stock market more dynamic, but on the other hand we also need to strengthen regulation of the stock market, and we resolve to do that,” Li said in the interview, also attended by officials including the deputy chairman of the National Development and Reform Commission.

China’s benchmark Shanghai Composite Index rose 1.3 percent to 2,916.56 at Friday’s close. The gauge has tumbled 19 percent this year, the most among the 93 global benchmark measures tracked by Bloomberg.

Li’s comments are aimed at the vast majority of investors in China’s stock markets. Individuals drive more than 80 percent of trading on bourses in Shanghai and Shenzhen, versus about 15 percent in the U.S.

Watch Next: What China's Mess Means for the World...And the U.S.

What China's Mess Means for the World...And the U.S.

He was echoed by Fang Xinghai, vice chairman of the China Securities Regulatory Commission, who also attended the interview. Fang said the government intervened last year not to boost stocks as people thought but to pump liquidity into the market after fund managers sold shares. The government is prepared to intervene again “if the liquidity problems are quite severe and major and could lead to systemic risks,” Fang said.

China, which for so long provided comfort to investors, has become one of their greatest sources of anxiety. The country has shaken confidence with surprise currency moves, confused with chaotic market regulation and struck fear with criminal probes of financial executives. Li sought to convince the 2,500 business and political leaders present at Davos that China would stick to its pledge to open its financial markets and that the world’s second-biggest economy remains strong.

"The contribution of China’s economic growth to world economic growth remains unchanged," Li said. "So do the long-term trends of sound economic development in China and China’s policy of deepening reform and opening up."
Posted by arclein at 12:00 AM