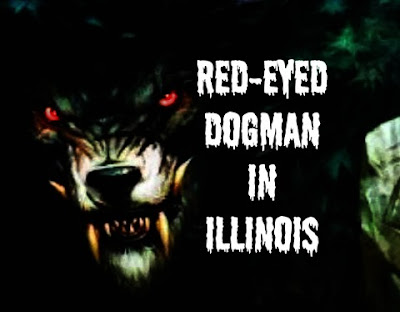 It is also confirmation that this creature is active in the winter as i expected. It would not be slowed down by the snow either and may even practice the art of disguising its tracks as well.  It will not be unconscious of the potential problem.

Do observe that the witnesses first instinct is to run.  They could have easily unloaded their shotguns into the creature with some effect as our other informant did.  He still ran as well though.  Perhaps our gut brain simply knows better than to hang around and play.


Richard in Illinois called in to tell of his dogman encounter during one of my appearances on 'Coast to Coast AM' with George Knapp...Lon:


“Listen, I just turned 60 here last November. Anyway, when I was 14 or 15, me and a buddy went hunting up on the Burlington Northern track, between the town of Dayton and Wedron. We just got a heavy snow. We got about 10 to 12 inches of snow. We made it all the way up to where the Wedron Silica pits were. And we turned and went across the tracks, come back the other side and we were pretty well gassed out because it was a long walk in the deep snow. Anyway, we got about a half mile from the State cemetery and we weren't talking. We were pretty well winded.

[ This is hard slogging that only a teenage boy seems to enjoy. - arclein ]

Anyway, I heard something growling and snarling and Jimmy walked up behind me and we were both looking. There was a big canine creature, okay, and there was a four or five strand wire barb wire fence and it was on the other side along the timberline. There was a big orange moon coming up on the east side of the river – the river runs north and south. Anyway, it came up to the edge of the fence. I had a 20 gauge single shot and I think Jimmy had a 12 gauge single shot. I had mine cocked and I imagine he had his cocked too. And it stood up and it was about four or five feet of it over the top of the fence. It was huge. It was terrifying. Anyway, it had red eyes. It was just as red as it could be and it wasn't from the moonlight because the moon was still on the east side of the river coming up.

Anyway, we took off and we usually cut down to the east side of the cemetery and went down through the woods back to the Burlington northern track but we were too scared to go that way so we went around the cemetery on the west side and went all the way to his house. His dad and his buddies were down in the basement where they were playing cards. We ran down there and told them what had happened to us and they didn't believe us at all. But it was terrifying.”