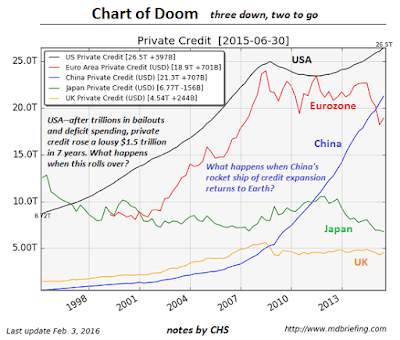 I have always maintained a decent long term view of markets and that has worked well over many years.  Yet they were all based on persistent credit expansion at the non government level.  Now governments have basically flooded those credit markets to stay afloat directly or indirectly and the private sector is reacting to rising bad business news.


The real icing on the cake is the contracting energy sector everywhere.  Throw in pending technological replacement for the oil industry and we have a perfect storm of medium and long term contraction in the energy business on top of the pending recapitalization of the whole financial sector once again.


The only way out is to deliver credit globally at the community level under guidelines i have discussed before. Otherwise we invite thieves...  That will massively expand private credit.

Once private credit rolls over in China and the U.S., the global recession will start its rapid slide down the Seneca Cliff.

Few question the importance of private credit in the global economy. When households and businesses are borrowing to expand production and buy homes, vehicles, etc., the economy expands smartly.

When private credit shrinks--that is, as businesses and households stop borrowing more and start paying down existing debt--the result is at best stagnation and at worst recession or depression.

Courtesy of Market Daily Briefing, here is The Chart of Doom, a chart of private credit in the five primary economies:

Why is this The Chart of Doom? It's fairly obvious that private credit is contracting in Japan and the Eurozone and stagnant in the U.K.

As for the U.S.: after trillions of dollars in bank bailouts and additional liquidity, and $8 trillion in deficit spending, private credit in the U.S. managed a paltry $1.5 trillion increase in the seven years since the 2008 financial meltdown.

This chart makes it clear that the sole prop under the global "recovery" since 2008-09 has been private credit growth in China. From $4 trillion to over $21 trillion in seven years--no wonder bubbles have been inflated globally.

Combine this expansion of private credit in China with the expansion of local government and other state-sector debt (state-owned enterprises, SOEs, etc.) and you have the makings of a global bubble machine.

In other words, the faltering global "recovery" and all the tenuous asset bubbles around the world both depend on a continued hyper-velocity rocket rise in China's private credit. What are the odds of this happening? Aren't the signs that this rocket ship has burned its available fuel abundant?

Once private credit rolls over in China and the U.S., the global recession will start its rapid slide down the Seneca Cliff: The Global Economy Could Fall Farther and Faster Than Pundits Expect.
Posted by arclein at 12:00 AM