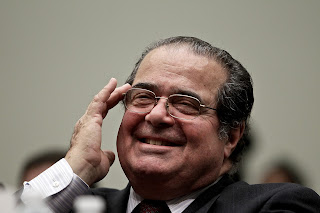 How about a resounding no.  He was clearly symptomatic of a developing heart failure during his last three days alive and that was only proven by his demise in bed after packing it in.  He likely passed out rather quickly after laying down and likely never knew he was in trouble.


His real enemy was simply too many years and an unwelcome fifty pounds.  It really then becomes a real crap shoot.  The medical examiner was completely correct in confirming natural causes.


The only reason it is even brought up is because his death was never going to be timely.

With confirmation that Supreme Court Justice Antonin Scalia was found dead Saturday morning with a pillow over his head and his clothes unwrinkled, nationally syndicated talk-radio host Michael Savage called for an investigation on the level of the presidentially appointed probe into President John F. Kennedy’s assassination in 1963.

“We need a Warren Commission-like federal investigation,” he said. “This is serious business.”

Savage said an immediate autopsy of the body is needed.

“There was no medical examiner present. There was no one who declared the death who was there. It was done by telephone from a U.S. Marshal appointed by Obama himself,” he said.

In an essay posted on his website, Savage asked what would happen if Donald Trump were in the White House in his final year and the justice was Ruth Bader Ginsburg.

“Do you think the left would be screaming that Donald Trump would have no right to appoint anyone to the Supreme Court? Do you think they would be demanding an autopsy and a full federal investigation?”

"We had a razor-thin savior of the conservative, or, shall I say traditional, ways in America, Antonin Scalia, who was found dead under suspicious circumstances," he said. "And now this character in the White House who nobody with a rational mind should trust is trying to railroad Loretta Lynch down our throats ... as his number one choice. Can you believe this?"

What do YOU think? Are you suspicious about Justice Antonin Scalia's death? Sound off in today's WND poll

Savage said somebody must stop Obama's nomination to the Supreme Court so the choice can be made by the new president.

"And I hope it's you," Savage told Trump.

"Donald, you know that just five, six days before Scalia was found dead with a pillow over his face, he was the lead voice against Obama's attempts to railroad that green gangsterism down our throats, he knocked it out? He was the one who did it."

The 79-year-old Scalia had been on a hunting trip at the Cibolo Creek Ranch in Presidio County, Texas.

Presidio County Judge Cinderela Guevara, who pronounced Scalia dead, said the death certificate will say the cause of death was natural and that he suffered a heart attack.

She said she decided not to order an autopsy after Sheriff Danny Dominguez concluded there were no signs of foul play, reported WFAA News in Dallas. The Scalia family concurred.

Michael Savage's primer for the 2016 election, "Government Zero: No Borders, No Language, No Culture," is available at the WND Superstore

“As part of my investigation, one of the things I did ask the sheriff and the U.S. Marshal: ‘Were there any signs of foul play?’ And they said, 'Absolutely not.' At that time, I still wanted to be careful, and asked them if [Scalia's] physician would call me,” Guevara said.

Guevara said she talked to Scalia's doctor in Washington, D.C., who told her Scalia had been sick and had visited his office Wednesday and Thursday before going on the hunting trip Friday.

According to Guevara, Scalia told his group Friday at dinner he was not feeling well and went to his room early. He then missed breakfast and lunch Saturday and was found unresponsive in his bed.

The owner of the Texas ranch and resort said Scalia died peacefully.

“The judge, when I found him Saturday morning, was in complete repose,” John Poindexter, the owner of Cibolo Creek Ranch in Marfa, Texas, told NBC News. “He was very peaceful in his — in the bed. He had obviously passed away with no difficulty at all in the middle of the night.”

Scalia, who was appointed to the high court by former President Ronald Reagan, was the longest-serving justice on the court, having taken his seat on Sept. 26, 1986. - Was Scalia Murdered?
Posted by arclein at 12:00 AM