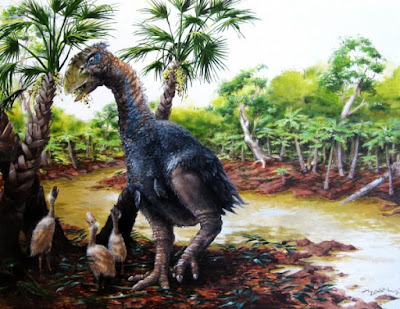 I wonder if it was truly flightless.  Without that ability, migration options are limited, yet it had to survive a winter like a penguin.  To do that it needs to harvest ample sea food.  Thus vegetarian seems unlikely.


Then we have the size.  Sea food again solves the difficulty.  It also explains its swift extinction in the face of inevitable predation.

Newswise — It's official: There really was a giant, flightless bird with a head the size

The confirmation comes from a new study by researchers from the Chinese Academy of Sciences in Beijing and the University of Colorado Boulder that describes the first and only fossil evidence from the Arctic of a massive bird known as Gastornis. The evidence is a single fossil toe bone of the 6-foot tall, several-hundred-pound bird from Ellesmere Island above the Arctic Circle. The bone is nearly a dead ringer to fossil toe bones from the huge bird discovered in Wyoming and which date to roughly the same time.

The Gastornis (formerly Diatryma) fossil from Ellesmere Island has been discussed by paleontologists since it was collected in the 1970s and appears on a few lists of the prehistoric fauna there, said Professor Thomas Stidham of the Chinese Academy of Sciences in Beijing. But this is the first time the bone has been closely examined and described, he said. Gastornis fossils also have been found in Europe and Asia.

"We knew there were a few bird fossils from up there, but we also knew they were extremely rare," said CU-Boulder Associate Professor Jaelyn Eberle of geological sciences a study co-author who conducts research on fossil mammals, reptiles and fishes. In addition to the Gastornis bone from Ellesmere, another scientist reported seeing a fossil footprint there, probably from a large flightless bird, although its specific location remains unknown, Eberle said.

A paper by Stidham and Eberle appears in the most recent issue of Scientific Reports, an open access, weekly journal from the publishers of Nature.

About 53 three million years ago during the early Eocene Epoch, the environment of Ellesmere Island was probably similar to cypress swamps in the southeast U.S. today, Eberle said. Fossil evidence indicates the island, which is adjacent to Greenland, hosted turtles, alligators, primates, tapirs and even large hippo-like and rhino-like mammals.

Today Ellesmere Island is one of the coldest, driest environments on Earth, where temperatures can drop to minus 40 degrees Fahrenheit in winter, said Eberle, also the curator of paleontology at the University of Colorado Museum of Natural History.

Originally thought to be a fearsome carnivore, recent research indicates Gastornis probably was a vegan, using its huge beak to tear at foliage, nuts, seeds and hard fruit.

A second Ellesmere Island bird from the early Eocene also is described by Stidham and Eberle in the new paper. Named Presbyornis, it was similar to birds in today's duck, goose and swan family but with long, flamingo-like legs. The evidence was a single humerus, or upper wing bone, collected by the same paleontology team that found the Gastornis bone.

Like Gastornis, Presbyornis was mentioned in several lists of Ellesmere Island fauna over the years but the bone had never been described, said Stidham.

Stidham compared casts of Presbyornis bones excavated in ancient Wyoming to the single bone from Ellesmere Island, including all of the marks for muscle attachments. "I couldn't tell the Wyoming specimens from the Ellesmere specimen, even though it was found roughly 4,000 kilometers (2,500 miles) to the north," he said.

While the diversity of plants and animals on Ellesmere was surprisingly high in the early Eocene, one of the biggest challenges to life on the island may have been the Arctic winters, said Eberle. "Since Ellesmere Island is high above the Arctic Circle, the lights still went out there for several months of the year, just as they do today."

It is not known whether Presbyornis migrated north to Ellesmere Island every year or lived there year-round, said Stidham. "Given the fossils we have, both hypotheses are possible," he said. "There are some sea ducks today that spend the winter in the cold, freezing Arctic, and we see many more species of wa

The paleontology team working on Ellesmere Island in the 1970s and who found the Gastornis and Presbyornis bones in the 1970s included Mary Dawson, Robert "Mac" West, Howard Hutchinson and Malcolm McKenna.

The new study has implications for the rapidly warming Arctic climate, primarily a result of greenhouse gases being pumped into Earth's atmosphere by humans.

"Permanent Arctic ice, which has been around for millennia, is on track to disappear," Eberle said. "I'm not suggesting there will be a return of alligators and giant tortoises to Ellesmere Island any time soon. But what we know about past warm intervals in the Arctic can give us a much better idea about what to expect in terms of changing plant and animal populations there in the future."
Posted by arclein at 12:00 AM