What Happened When Saudi Arabia Closed its Borders to Christian Immigrants 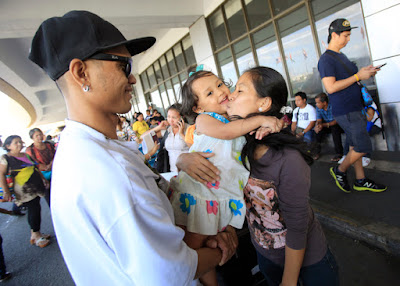 The take home is that you cannot win this game.  The only restraint that works is the actual cost and even that is almost meaningless when folks sell themselves into slavery in order to go.  In fact over the past fifty years, it has become progressively easier to migrate and so hey have.


What drives migration is actually failure at home to provide sufficient employment.  Who migrates out of Europe anymore?  It is a rare European.


What this means though is that if we solve poverty on a global basis all immigration disappears unless actively promoted and supported.

Donald Trump has made exclusion a troubling touchpoint of his campaign, through his inflammatory proposal to block Muslim refugees or with the removal of a Muslim woman from one of his rallies.

Democrats have gotten into the act, too. The new Visa Waiver Reform Bill (HR 158), recently passed in the House with bipartisan support, would make movements into the U.S. by Muslims more difficult.

The bill requires that individuals – even European Union citizens – acquire a visa before re-entry to the U.S. after visiting Muslim majority countries such as Syria or Iran.

Before U.S. politicians and European leaders like Alexis Tsipras of Greece or Hungarian Prime Minister Viktor Orban push ahead with their calls for closing borders, they would be wise to learn from what has happened in the recent past when the roles were reversed – that is, when Muslim nations tried to keep out primarily Christian migrants.

I have spent the last seven years interviewing migrants and recruiters who had experiences with smuggling, trafficking and migration in the United Arab Emirates, Kuwait, the Philippines, Madagascar and Indonesia.

Several things are clear from my research. Closing borders doesn’t work. The attempt to tighten borders makes things worse for migrants and the native population alike.

Lessons from the Gulf

Some Persian Gulf nations have tried to close their borders to particular migrant populations over the past several years.

Case in point: Saudi Arabia in 2011 decided to ban Filipina domestic workers from entering the country. Their public reason was frustration over minimum labor standards dictated by the Philippine government. But many people I spoke to in Saudi Arabia speculated the real reason was because the Philippines is primarily Christian. The people I interviewed noted that Saudi employers were said to have a preference for Muslim domestic workers over Christians who were seen as “dirty,” “impure” and a “corrupting” influence in the home. This claim was bolstered by the fact that Saudi Arabia quickly turned to a Muslim majority country – Indonesia – for domestic workers instead.

On the other side, the Philippines and other migrant-sending countries such as Ethiopia and Eritrea responded by tightening their borders – trying to keep in their female citizens who wished to migrate to the Middle East.
The result? In the words of one Filipina who chose to be smuggled to Dubai, “they closed the doors but opened the window.”
This woman, a 25-year-old domestic worker from Manila, needed to work in order to support her ailing mother and her recently abandoned nieces. When she heard of well-paying opportunities in Saudi Arabia, she knew the risks involved.

“Jumping out the window” becomes a necessary response for migrants who need to make ends meet to survive, or refugees who must move to survive. This leaves the already marginalized even more vulnerable to abuses and violence during the smuggling process.

Between a rock and a hard place

Saudi Arabia soon realized that many Filipinas were still migrating to work as domestics, but they were doing so “under the radar” or working in the underground economy. In the end, both the Saudis and sending countries quietly reversed their policies as the flow of migrants continued.

Saudi Arabia, the United Arab Emirates, and even the Philippines have seen their rankings fall in the State Department’s annual Trafficking in Persons Report – the central tool of U.S. anti-trafficking policy – for these practices of tightening borders. It’s ironic to now hear politicians in the West wanting to keep out Muslim refugees.

Western politicians and journalists in recent years have often incorrectly claimed that terrorists – particularly Muslim ones – engaged in human trafficking in order to fund their efforts.

Today we see that responses to terrorism are actually causing and fueling a trafficking industry wherein refugees and other migrants will choose to be smuggled to circumvent tightened borders. The availability of such a vulnerable population can lead to human trafficking.

Rhetoric about states closing their doors to refugees not only fuels the Islamic State (ISIS), as President Obama has noted, but also is fodder for smugglers or traffickers who use this talk to bolster their operations.

The definition of human trafficking under U.S. and international law includes any and all instances of “force, fraud, or coercion. However, much of trafficking enforcement has focused on the sex industry to the detriment of other migrant laborers.

Notably, under trafficking laws passed in 2001, the U.S. created a proviso for the distribution of 5,000 T-visas each year. These visas designed to give amnesty to victims of trafficking. To date, however, only around 4,000 have been given out – not annually, but total. This is a drop in the bucket. This is because qualification for a T-visa is tethered to a survivor’s willingness to testify against their “trafficker.” Also, only those deemed to have experienced “severe human trafficking” are eligible for a visa. The standards to qualify for this category remain opaque.

Studies of the effects of immigrant populations on U.S. cities not only show that open borders allow migrants and refugees to move safely, but also that resettlement and job placement benefits both the individuals and the receiving countries by bolstering economies. Facilitating job opportunities allows new migrants to contribute in meaningful ways to the economies in which they resettle, preventing the abuses that may take place in the informal economy.

In my conversations with migrants and survivors of trafficking, they are typically simply seeking safe migratory routes and wish to contribute to their new home countries. It is both cruel and counterproductive to push them to jump out the window onto what can be very hard ground.
Posted by arclein at 12:00 AM