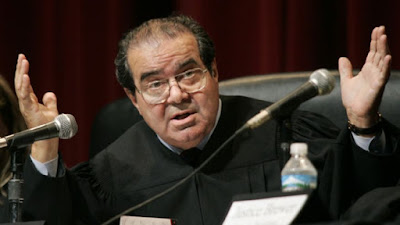 Somehow a great Man has left us.  Even now the story's regarding cause are been aired.  It is enough that he passed full in years. The rest is for others and it does not matter.

This story matters.  We see a man of sound conviction who amazingly lived those convictions.  That is something that i have always found far harder to do.  We can all grow from this because he ignored all acclaim and reached out to help a fellow human being, and surely over and over again.

What have you done?


May God rest his soul


Some of Justice Antonin Scalia’s decisions I agreed with and some I disagreed with. But I’ve never once doubted the sincerity of his beliefs.

Now that he is gone from this earth, I can tell a story I’ve held inside for many years, a scene that touched me deeply and profoundly. I cannot think of him without remembering this moment.

It was a spring afternoon some years ago, and he was attending church services, sitting in a back pew, holding his prayer book in his hands. The Mass had ended and most people had gone. He was still saying prayers, alone in the back pew.

He finally got up and began to walk out. There were no reporters, nobody watching. There was only a woman who had been attending the same services. She had no idea who he was. I was a bystander, and I’m certain he didn’t know I was there.

What was a bit unusual about this woman: she had lashing sores on her face and hands. They were open sores. There was some disease, and not just physically. She behaved strangely, a troubled person that you meet in large cities and quickly walk away from. A person to avoid and certainly never touch.

For whatever reason, she walked up to Justice Scalia, who was alone. He took her hands, though they were full of sores. She leaned in to say something, and she began to cry.

He held her face next to his, and she talked beneath her tears that were now streaming down his suit. He didn’t flinch. He didn’t try to get away. He just held her while she spoke. This lasted for perhaps more than 5 minutes. He closed his eyes while she she spoke, gripping her back with his hand.

He didn’t recoil. He stood there with conviction. And love.

There were no cameras and no other onlookers besides myself, and he had no idea I was there.

Finally she was finished. What he said comforted her, and she gained composure. She pulled away, ready to go. He held her rough, sore-filled hands and had a few final words that I could not hear. He gave her some money.

And then she walked away.

And then he walked away, across the green grass, toward the Supreme Court building, alone. He was probably preparing for an afternoon of work.

I stood there in awe. Here we have one of Washington’s most powerful men, a star by any standard. Cameras followed him all over. That kind of attention can get to you — in time, you might begin to believe that your life is a performance.

Not in Justice Scalia’s case. What I saw that day was a humble man, a compassionate man, a man who believed in the power of personal contact. This was the action of a man of true principle and character. In that action, he sought no credit and sought no attention. He was merely doing a humane and beautiful thing.

A theme in his career was human freedom. Scalia believed in it. And why? Because he thought humanity could generate better outcomes than all the planning and all the power ever mustered by the central state. This was a principle he lived.

With this one action, he touched not only her life but mine too. I can only imagine how many other examples his friends could name.

This was a good man. It is so rare for a man of this quality to gain the high level of influence and power that he did in his lifetime.

Lord Acton had a dictum that power tends to corrupt. What I saw that day was the rare exception. Power did not corrupt this man. He remained true to himself and true to his principles.

How unusual: a public figure in his position he never stopped being a good, even great, person.

May his beautiful soul now rest in God’s loving care.
Posted by arclein at 12:00 AM