In the big picture vast amounts of USA currency was dumped into the global economy by way of QE in particular to the point that the some banks no longer want those on their books.  They can no longer make money on those dollars.  thus we have negative interest rates.  the same applies for all other currencies once you start QE or quantitative easing.

Again the established top two thirds of society is no longer able to support further borrowing and is looking to lower their exposure.  The useful solution is to empower the lower third but that takes serious imagination.

When the global economy is unable to absorb capital pools it is time to worry..
.
Tokyo Doubles Down
By John Mauldin | Feb 01, 2016
http://www.mauldineconomics.com/frontlinethoughts/
“When it becomes serious, you have to lie.”
“I'm ready to be insulted as being insufficiently democratic, but I want to be serious... I am for secret, dark debates.”
“Of course there will be transfers of sovereignty. But would I be intelligent to draw the attention of public opinion to this fact?”
“If it's a Yes, we will say ‘on we go,’ and if it’s a No we will say ‘we continue.’”
“We all know what to do, we just don't know how to get re-elected after we’ve done it.”
– All quotes from Jean-Claude Juncker, prime minister of Luxembourg and president of the European Commission
I’ve been busily writing a letter on oil and energy, but in the middle of the process I decided yesterday that I really needed to talk to you about the Bank of Japan’s “surprise” interest-rate move to -0.1%. And I don’t so much want to comment on the factual of the policy move as on what it means for the rest of the world, and especially the US.
But before we go there, I also want to note that today is Iowa, and so we’re about to turn a big corner in what is fast becoming one of the wackiest years in American political history. I’m going to sit down tonight after the caucus results come in and write to you again, for aspecial edition of Thoughts from the Frontline that will hit your inbox tomorrow. Along with Iowa, I want to delve into the issue of what a “brokered convention” would mean for the Republican Party, and what one would look like.
QE Failed, So Why Not Double Down?
I have been steadfastly maintaining that the Bank of Japan was going to augment its quantitative easing stance sometime this spring. Inflation has not come close to their target, and the country’s growth is dismal, to say the least. So the fact that the Bank of Japan “did something” was not a surprise. I will however admit to being surprised – along with the rest of the world – that they chose to do it with negative interest rates. Especially given the fact that Kuroda-san had specifically said in testimony to parliament only a few days earlier that he was not considering negative interest rates.
While this development is significant for Japan, of course, I think it has broader implications for the world; and the more I think about it, the more nervous I get. First let’s look at some facts.
Conspiracy theorists will love this Bank of Japan timeline:
Jan 21 – Kuroda emphatically tells Japanese parliament he is not considering NIRP.
Jan 22 – Kuroda flies to Davos.
Jan 29 – Kuroda enthusiastically embraces NIRP and promises more of it if needed.
So, whom did he talk to in Davos, and what did they say to change his mind?
In an email exchange I had with Rob Arnott about the Bank of Japan, he reminded me of that wonderful Jean-Claude Juncker quote wherein he states, “When it gets serious, you have to lie.” Which, given my theme, ties in well with another of his quotes: “I'm ready to be insulted as being insufficiently democratic, but I want to be serious... I am for secret, dark debates.”
Haruhiko Kuroda, according to reports, came back from that testimony to parliament and instructed his staff to prepare a set of documents outlining all the potential choices, along with their pros and cons, to be ready for the next BOJ meeting when he got back from Davos.
To pretend that he walked into that meeting without having had lengthy talks about whether to pursue negative interest rates strains credulity – and it just wouldn’t be very Japanese. The conduct of business and governance in Japan relies heavily on a process called nemawashi, or “stirring the roots”: the outcome of any important meeting is decided ahead of time through private discussions among those who will participate. In any case, the vote to take rates into negative territory came down to a razor-thin 5 to 4, so you can be damn sure Kuroda knew exactly who was with him and who was not. You do not take a vote like that and lose – not and remain chairman.
The entire world has been watching the European experiment. Four countries in Europe are now at negative rates (see graph below). Two others are so close that it hardly makes a difference. The Federal Reserve and the Bank of England are both at 0.5%.

Switzerland, Denmark, and Sweden all lowered their rates to make their currencies less attractive, since the franc, the krone, and the krona had appreciated too strongly against the faltering euro. Meanwhile, the ECB is trying to stimulate the Eurozone economy and create inflation. The question is, exactly how many unintended consequences will there be with negative rates?
(For the record, to my knowledge none of the banks charge negative rates on required reserves, just on excess reserves. Excess reserves are defined as money on deposit at a bank in excess of whatever the regulators think is necessary to fund the bank’s operations. The concept of excess reserves is a totally artificial one. Aggressive banks will keep reserves as low as possible in order to make maximum returns, and conservative banks will of course hold more reserves. Where do you want to put your money? Then again, if you’re looking to borrow money, which bank do you go to?)
The people that NIRP (negative interest rate policy) hurts the most are those who are living on their savings or trying to grow their retirement accounts, but apparently our all-wise central banks have decided that a little pain for them is worth the potential for growth in the long run. Savers in both Germany and Japan have to buy bonds out past seven years just to see a positive return. Some 29% of European bonds now carry a negative interest rate. Recently we have seen Japanese corporate bonds paying negative interest.
Sidebar: if I am a Japanese corporation and somebody is willing to pay me to lend me money, why am I not backing up the truck and seeing how much the market will give me? Then turn around and invest the money in fixed-income assets? Just asking… 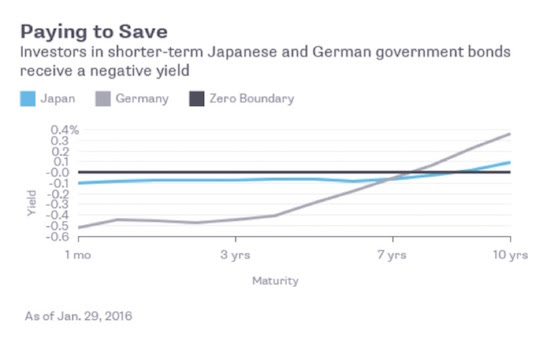