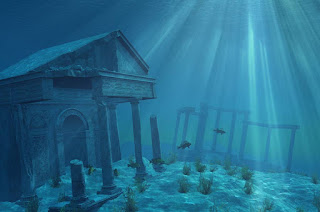 The first issue that i have with all of this is that the dates are generally rubbish and best put aside.  The second is our general lack of geological framework in time and space as well.  Seismic country tends to do this all often and ground can be disturbed many times.  This makes any form of dating tied mostly to the last known disturbance and well nigh useless.


Our two obvious Bronze Age deep water constructs off Cuba and Japan happen to be also were the most vertical displacement is most likely.  Thus presuming our Atlantean conjecture all holds up for 1159 BC, we have two structures nicely conforming to the Pyramids and apparently contemporaneous.


Most of our submerged coastal centers are all much more recent.  None of this says much about the extensive civilization residing on the submerged continental shelf before 12900 BP.  All that was either swept away or ground away as the sea level rose.  What we have are the results of sudden seismic shifts that took it all down into safe waters.

They realized that the men had rebelled and decided to exterminate them. Thousands of pumas left the cave and devoured the man who begged the devil for help. But the devil remained unmoved by their pleas. Seeing this, Inti, the god of the sun cried. Her tears were so abundant that in forty days the valley was flooded.”—Inca legend of Lake Titicaca

Consider one anthropological hypothesis that concedes the possibility of a prehistoric humanity enjoying a high degree of technological development. Some evidence suggests that ancient people appear to have crafted a technology significantly more advanced than what we might imagine. Much of the support for this idea comes from the discovery of dozens of ancient cities submerged beneath the oceans across the entire planet.  [ What dozens? arclein ]

Surprising cases like that of the Yonaguni structures off the coasts of Japan, or the submerged “Mega city” accidentally discovered off the northeast coast of Cuba, continue to offer researchers clues to what was once considered merely geographical mythology—tales such as those of Atlantis, Mu, or the land of Thule. Every few years a long-sunken discovery lends support for this prehistoric empire hypothesis.

Reconstructed Image taken from the sonar scan of the sea floor off the coast of Cuba.

Urban Architecture from an Impossible Time

A typical example of the archeological ruins described above was found in waters 120 feet deep in the Gulf of Cabay, located off the western coast of India. It is estimated that the vast city, discovered by chance during an investigation on pollution, could date back some 9,000 years.

Using a sonar tracker, investigators managed to identify defined geometric structures at a depth of about 120 feet. From the site, they recovered construction material, pottery, sections of walls, basins, sculptures, bones, and human teeth. The carbon tests indicate that these pieces were 9,500 years old.

Before this finding, anthropologists thought that the area had not seen civilization before 2,500 B.C. This ancient city, therefore, was even older than the Harappan civilization, once believed to be the oldest of the subcontinent.

Another surprising case came in 1967, when the Aluminaut—an exploration submarine capable of submerging deeper than any craft of its day—casually discovered a “road” off the coastal zone of Florida, Georgia, and South Carolina. Found at a depth of nearly 3,000 feet, this road traced a straight line for more than 15 miles.

Even more surprising, this road had been paved with sophisticated cement composed of aluminum, silicon, calcium, iron, and magnesium. Despite its age, the road was found to be free of debris due to an underwater current that kept it clear.

This forgotten road still proved a worthy thoroughfare as the special wheels of the Aluminaut allowed the sub to actually travel along the enigmatic highway. Later, scientists exploring the area found a series of monolithic constructions at one end of the road. What technology could construct a long paved road that would remain in good condition for 10,000 years?

A more recent discovery of this type took place in 2004, when the same tsunami that battered the coasts of Southeast Asia also moved tons of sand from the cost of Tamil Nadu, India. The storm cleared years of dust that led to the discovery of the mythical city of Mahabalipuram.

According to local legend, the city of Mahabalipuram suffered a great flood, submerging it in a single day 1,000 years ago, when the gods became jealous of its beauty. The local inhabitants recounted that six temples were covered by water, but that part of the seventh remained on the coast. The team of 25 divers from the Archaeological Survey of India explored the extensive area covered with man-made structures, ranging at depths of between 15 and 25 feet below the water.

The scale of the submerged ruins covered several square miles, at distances of up to a mile from the coast. Conservative estimates of the age of these constructions range from 1,500 to 1,200 years old, though some investigators say they originate from up to 6,000 years ago.

Classified by some scientists as the archeological find of the century, the structures accidentally discovered off the Japanese coast of Yonaguni offer ancient architecture in the form of pillars, hexagons, stairs, avenues, arcades, and even a stepped pyramid.

While the most conservative hypothesis postulates that the Yonaguni structures are the product of the marked seismic activity in the area, the precise angles of the rocks and their arrangement in relation to one another suggest that this site might hold remnants of a submerged city.

Evidence in favor of this stance includes the chemical composition of the chalky rocks (which do not naturally exist in the region), two openings about 6.5 feet deep adjacent to the structures—which no archeologist dares to classify as a natural formation—and an oval-shaped rock that does not appear to belong to the set, but exhibits a clear northward facing point. The entire submerged city of Yonaguni is estimated by some to be at least 10,000 years old.

Marine archeology has only become an academic possibility in the last 50 years with the introduction of scuba gear. According to marine archeologist Dr. Nick Flemming, at least 500 submerged sites containing the remains of some form of man-made structure or artifacts have been found around the globe. Some calculations figure that nearly a fifth of these sites are more than 3,000 years old.

Certainly, some of these sites were washed away by floods, but others may have found their place at the bottom of the sea through tectonic shifts. As many of these places were originally built on solid, dry land, Earth may have been geographically quite different than what we know today. Likewise, these people would have come from an era more remote than what we understand as the dawn of civilization.

So, is our current civilization the greatest mankind has ever known, or merely one tiny peak among many in a cycle that stretches far into the distant past? The answer might be found at the bottom of our oceans.