Syria – is the End in Sight? 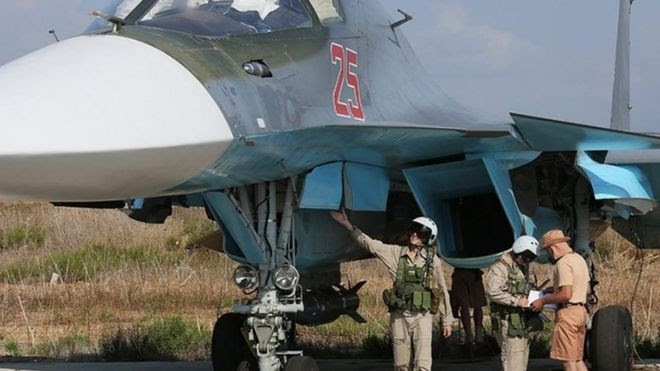 Of course it is. We had a stalemate that just ended. Did it ever occur to anyone that a small stalemated hot war in the deserts of Syria served to suck in Islamic radicals of all stripes out of all those other places that allowed them to be a serious problem.  Just how serious was anyone about ending all this?


It is pretty clear that Assad has won his civil war in the cities by and large and now we have visible Russian support to do a mop up and to persuade all hardliners that opposition must fail.  Pockets will be crushed by Syrian or even Russian boots on the ground.  The weather is even perfect for the Russians as well.  China even gets to train its naval pilots in real conditions.


This will be all over by March.  Russia will earn prestige and a staunch ally in Syria.  The USA will look like a donkey which in view of its handling of all this must be deemed as richly deserved..

At last there may be an end in sight to the disaster that Western foreign policy has landed upon Syria, formerly one of the most stable and secular nations in the Middle East. One also with a strong military force that held stocks of unused chemical weapons primarily to counter the threat of Israel’s nuclear stockpile. It initially seemed clear that Assad had not used Sarin in a fight he was already winning at Ghouta, a suburb of Damascus where his soldiers were stationed.

After the propaganda machines weighed in though, you could be forgiven for thinking Assad would do something so incredibly stupid, soon after Obama declared use of chemical weapons to be America’s “red line.” Assad isn’t stupid. We should follow the money and ask who benefited? The rebel terrorists and the arms industry as countless millions of taxpayers’ money was poured into funding the “moderate” opposition, prolonging a conflict that was nearing its end. That opposition, the Free Syrian Army is now little more than a name, but one we hear more of than thehundreds of other militias in the field, predominantly Islamic.

If successful, the so-called revolution that we have been fanning and funding would inevitably lead to the absorption of Syria into the expanding Islamic State, a body that was underwritten by Western money and armaments, now supplemented by oil and taxation revenues from conquered lands. They are not stupid either, just a new and very upstart state. This outcome would not be revolution, but conquest. Western efforts to combat IS have been singularly ineffective, with the world’s mightiest war machine unable or unwilling to halt their progress. There is little doubt that if Assad falls Islamic State would rapidly incorporate or eliminate every other faction in the fight, destroy any remaining ancient monuments and be irreversibly en route to one day claiming a seat at the United Nations.
Is this where we want to go?

Is it not a strange turn of affairs that tough-guy Vladimir Putin, the West’s current favourite bad guy, should be the only world leader to realize this is not a good place to go? He may be a gangster, but at least he’s his own gangster and not manipulated by the dark shadowy forces of the military industrial complex that American President Eisenhower warned us of and Kennedy strongly condemned. In Sept 2013 Putin narrowly stopped the US from going on a Syrian bombing spree (prompted by allegations of chemical weapons use) through getting Assad’s agreement to clear out and hand over Syria’s entire chemical weapons stock. Clever move, and one hugely frustrating to those who control the US.

So now Russia steps into the arena, openly and at the request of the legitimate Syrian government. They realize that terrorists are terrorists – these are not revolutionaries seeking democracy and would all meld into IS if Assad fell. Why screw around playing one side against the other, unless you are manipulated by those conflict-loving forces of which Kennedy and Eisenhower spoke? That’s the positive side of being a gangster boss politician – you’re in nobody’s pockets but your own and see no benefit in waging war for the sake of war itself. Even in Crimea, the minimal fighting stopped once Russia’s objective was achieved. Conflict for conflict’s sake is not on the Russian agenda. Curious how we rail about Russian jets straying into Turkish airspace while our jets bomb hospitals and our close ally Saudi Arabia kills thousands of civilians in Yemen with the weapons we supply.

Yes it’s strange for me, a passionate advocate of non-violence to be rallying behind military effort by a powerful state. As do most, I long to see the war over so that refugees can return to rebuild their lives, and Russian action could achieve this goal. When we watched refugees flooding into Germany they were fleeing the fighting, NOT politics or religious persecution. Most of them would love to go home. Human beings are amazing animals, able to rebuild lives, towns and cities, as did Europe and Asia after the last big war. Hiroshima and Dresden thrive today. We can do it.

The fighting has to stop.

Full power to you Russia.
History will be grateful.
Posted by arclein at 12:00 AM