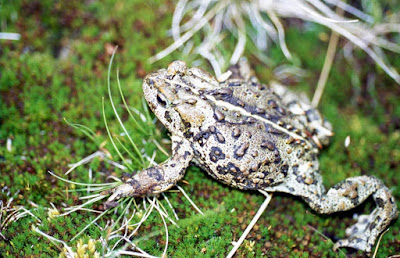 The actual mechanism happens to be subtle.  The Round up and phosphate and all other chemicals accumulates in ground water at what appears to be a low level.  Trouble is is that it becomes pervasive and this means that the skin cannot avoid absorbing these chemicals.  I am sure that they are then processed through the liver and possibly stored in the fat.


All this means that the victim species accumulate toxic loads.  This includes in the human groin by the same indicated mechanisms.


The take home is that the total food chain has been over fertilized and over treated with chemicals in the mistaken trust that what is not specific merely goes out in the thrash.  That includes the dead zones in the oceans brought about by massive nitrogen fertilization.


Frogs, toads and salamanders continue to vanish from the American landscape at an alarming pace, with seven species — including Colorado’s boreal toad and Nevada’s yellow-legged frog — facing 50 percent drops in their numbers within seven years if the current rate of decline continues, according to new government research.3


The U.S. Geological Survey study, released Wednesday, is the first to document how quickly amphibians are disappearing, as well as how low the populations of the threatened species could go, given current trends.3


The exact reasons for the decline in amphibians, first noticed decades ago, remain unclear. But scientists believe several factors, including disease, an explosion of invasive species, climate change and pesticide use are contributing.3


The study said the populations of seven species of threatened frogs, including the boreal toad and the yellow-legged frog, are decreasing at a rate of 11.6 percent a year.3


More than 40 species of frogs, such as the Fowler’s toad and spring peepers, are declining at a rate of 2.7 percent. If that pace keeps up, their populations will be halved in 27 years, the study said.


“We knew they were declining and we didn’t know how fast,” said Michael J. Adams, a research ecologist for USGS and the lead author of the study, Trends in Amphibian Occupancy in the United States, published in the journal PLOS ONE. “It’s a loss of biodiversity. You lose them and you can’t get them back. That seems like a problem.”


The disappearance of amphibians is a global phenomenon. But in the United States, it adds to a disturbing trend of mass vanishings that include honeybees and numerous species of bats along Atlantic states and the Midwest.


Bees, which also are disappearing in Europe, serve nature and farmers by pollinating a wide range of plants and food crops. Bats, which have died by the millions from a disease called white nose syndrome, also are pollinators but, along with amphibians, eat many metric tons of insects each year, allowing farmers to cut back on insecticides.


Frogs and their like are much more than slimy animals that come alive in the dark and croak; they are deeply woven into the lives of humans. The offspring of frogs and toads, tadpoles, are the first organisms children watch in school as the creatures develop arms and legs. Adult amphibians are routinely dissected by many of those same children as they go through school.


Scientists have produced pharmaceutical drugs from chemicals found in the skin of frogs and toads, and large numbers of amphibians are collected for medical research.


For the USGS study, researchers pored over data collected at 34 watery and swampy areas from Sierra Nevada mountains to Louisiana and Florida over nine years. They traveled to sites and counted clusters of nearly 50 amphibian species, marking their decline year after year for nearly a decade.

Researchers carried a list of species — some thought to be faring well, others to be struggling — compiled by the International Union for Conservation of Nature, which seeks solutions to environmental challenges. The data were studied by USGS’s Amphibian Research and Monitoring Initiative.


The loss of amphibians is occurring even in areas where animals are protected, in national parks and wildlife refuges, the study said.


The disappearance of frogs, toads and salamanders first got attention in 1989 when “my colleagues and I began reporting that in familiar amphibian haunts the numbers of frogs and salamanders were declining,” biologist James P. Collins wrote in an article for Natural History Magazine nine years ago.


“By the mid-1990s we were hearing reports that species were going extinct in only a few years,” he wrote. So “the search for the answer to our question — why are they gone? — was becoming paramount.”


It was hard to answer the question at the time “because there was very little monitoring going on,” said Adams, the author of the new study. “We were trying to convince ourselves there was really something going on with amphibians that wasn’t happening with other species, the disappearance of frogs around the world.”


The new research is the first to document the steepness of the decline. But others sought to answer why years ago.


A study of Minnesota’s northern leopard frog fingered farm chemicals as a contributor to its decline, according to the journal Nature . After studying more than 200 factors that led to infection, two stood out, a synopsis of the report said, an herbicide called atrazine and phosphate, a fertilizer.


Whatever the reason, the declines have led at least one activist group to call for an end to another practice that contributes to the mortality of frogs: dissections. Save the Frogs set an unlikely goal to get dissections out of every school by 2014.


“They are contributing to the depletion of wild frog populations and the spread of harmful invasive species and infectious diseases,” the group says.
Posted by arclein at 12:00 AM