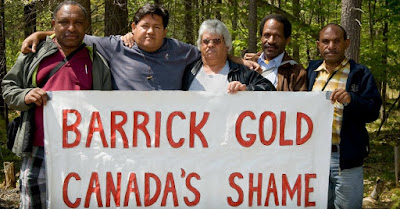 This is more anti mining propaganda that directly twists the science to promote the old anti development agenda. It is offensive to say the least.

I do not know the details, but we can be sure that the so called cyanide content was very dilute which is why so much fluid was released. But let us not mention a real figure here. Was the release damaging. To some degree, every flood is damaging. How much different was this? We are not told.
What i find offensive is that all cyanide can be neutralized to produce a neutral solution that is harmless. Problem is, it turns the water to a harmless purple color. Good luck on getting that approved.

Yet the haters go out and ignore all science and construct lies to dupe the ignorant. That is wrong. The alternative to modern mining is no mining and giving up modernity by eliminating most of humanity or perhaps using ancient mining methods which is used by artisanal miners which are environmentally impossible and impossible to organize.

Governments have learned to support modern mining because it provides the better economic and environmental deal all through the life of a deposit. There is no reward from artisan mining at all and they are never mining the same rock.

'They cannot continue to handle affairs that are so delicate, that affect the environment and people this way.'

The Argentine government announced it was launching a legal investigation of the Canadian firm to see if there had been any criminal wrongdoing. If so, the company will allegedly face sanctions. The firm is already being sued in civil court over the leak, with plaintiffs demanding that it pay compensation for harm done to people, goods, and the environment. (Photo: ProtestBarrick.net)

Highlighting how corporate extractivism and lack of accountability is driving the destruction of Latin American communities, a Canadian mining company has now confirmed that more than one million liters of cyanide solution spilled from the Barrick Gold Veladero mine in San Juan, Argentina this month—making the spill more than four times larger than originally estimated.


"Far from ensuring that mining-affected communities enjoy the full range of protection under the law, governments—including the Canadian government—have twisted the law to protect and promote mining interests by targeting community activists and defenders."
—Jen Moore, MiningWatch Canada.

The Toronto-headquartered mining company initially said it had spilled just 224,000 liters of the toxic liquid, used to leach gold from processed rocks, into the Potrerillos River. On Wednesday, the corporation amended its statement (pdf) and said that in fact 1.072 million liters of a cyanide and water solution were spilled due to a failure in one of the valves in the mine's pipes.


The spill occurred on September 12, "and news quickly spread among local residents through social media, causing them to stockpile bottled water in fear," the Argentina Independent reported Thursday. Last week, thousands rallied together in the city of Jáchal to protest the mining company.
Barrick—dubbed one of "The 12 Least Ethical Companies in the World" by the Swiss research firm Covalence in 2010—claims that "no risks to human health were identified."

But a joint statement from the Environment and Natural Resources Foundation (FARN), Greenpeace Argentina, and the Argentine Association of Environmental Lawyers, made it clear that environmental protection groups remain unconvinced about the long-term impact of the spill.

"Even if the judge is understood to have put into place a series of conditions, we are concerned by the secrecy with which the incident was handled, the scarce information about the circumstances of the event provided by the authorities and the risk management measures and contingencies," said (Spanish) Pía Marchegiani of FARN. "They cannot continue to handle affairs that are so delicate, that affect the environment and people this way."

The groups are criticizing a judge's decision on Thursday to lift orders suspending operations of the mine, suggesting that the local government conspired with Barrick to cover-up the magnitude of the leak and its potential consequences.

The new report—entitled In the National Interest? Criminalization of Land and Environment Defenders in the Americas—argues that "the model of industrial mineral extraction that Canada promotes abroad is informed by deregulation of the extractive sector at home and a colonialist past and present that—with renewed fervor in recent years—views those who speak out as a threat to the national interest and hence a target for spy agencies, tax audits, funding cuts, and gratuitous policing."

"Far from ensuring that mining-affected communities enjoy the full range of protection under the law, governments—including the Canadian government—have twisted the law to protect and promote mining interests by targeting community activists and defenders," said Jen Moore, Latin America program coordinator for MiningWatch Canada. "It has become a low-intensity war against communities and organizations who are fighting for environmental justice in Latin America."
Posted by arclein at 12:00 AM