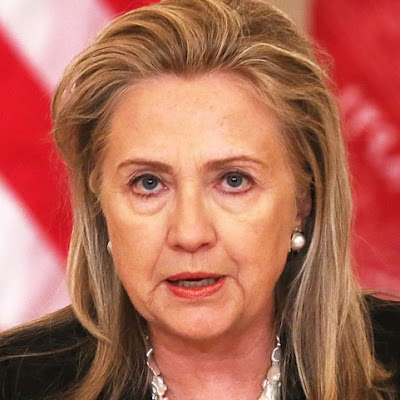 Just why is it that it is the National Inquirer that is doing a serious story on Hillary's health? Particularly when that is particularly critical regarding a four year stint in the White house.

Alternatively she may be a serious drunk and all work to cover for her. Neither are happy stories and both strongly suggests she is not able to properly proceed.

In the meantime we have this from her Doctor telling us that there is nothing to look at here. However she is on Coumadin also known as Warfarin or rat poison which is a serious blood thinner and does limit your alcohol consumption to one to two drinks per day. Somehow i suspect her alcohol issues are now tightly controlled..

She must at least be taking serious care of herself, so i think she is really good to go.  I am more nervous about Trump who surely has cardiovascular issues which i presume are well managed.  Otherwise he needs to become a vegetarian fro the duration.

by STEVE HERZ and SHARON CHURCHER
Failing health and a deadly thirst for power are driving Hillary Clinton to an early grave, The National ENQUIRER has learned in a bombshell investigation.

The desperate and deteriorating 67-year-old won’t make it to the White House — because she’ll be dead in six months, sources told The ENQUIRER.

Amazingly, her ultra-competitive husband is the one pressuring her to stay on the campaign trail despite her decline!

“Cruel Bill would rather see her drop than miss a single vote,” a source told The ENQUIRER. “Hillary shouldn’t be on the campaign trail — she should be home making out her will!”

Shocking details from a new book and Hillary’s “secret medical file” show the presidential candidate is a ticking time bomb whose life is about to expire.

But Hillary’s camp — desperate to win the Democratic nomination — is engaging in a massive cover-up about her health.

Her campaign declared in July that Hillary had made a “complete” recovery from her 2012 brush with death, when she fainted and tests discovered a blood clot was blocking a vein in her brain.

But author Edward Klein revealed in his blockbuster book, “Unlikeable: The Problem with Hillary,” that the former First Lady is not telling “the full story” and admits she often gets “dizzy” and “woozy’’ behind the scenes.

A source in his book said: “She’s risking her health each day.”

Her “secret medical file” shows that during her hospitalization three years ago in New York, doctors believed she had brain cancer.

Said the source: “Doctors found out that Hillary exhibited a number of symptoms linked to brain cancer.

Hillary has admitted suffering from endometriosis — a painful gynecological condition that increases a woman’s chances of developing brain cancer.

Hillary’s medical file also reveals she’s covered up “three secret strokes” in addition to the public collapses she suffered that have raised concern about her health.

In 2005, Hillary fainted in Buffalo, N.Y. Four years later, the then–Secretary of State broke her right elbow in a mysterious fall.

In 2011, she collapsed again while boarding a flight in Yemen.

The ENQUIRER also learned Hillary suffers from the early stages of multiple sclerosis.

The autoimmune disease affects the brain, spinal cord and other areas of the body. Dr. Leslie R. Matthews, assistant professor of surgery at Morehouse School of Medicine in Atlanta, told The ENQUIRER that Hillary “could have early symptoms of MS that went undiagnosed for years.”

The expert, who has not treated Hillary, said: “Sometimes MS lays dormant for years … certainly the stress of political life would exacerbate the symptoms.”

Hillary is also hiding alcohol abuse — which has lead to major depression and paranoia.

The source said the driven candidate downs four or more drinks of liquor a day and recently confessed to daughter Chelsea: “I’m an alcoholic! Please help me.”

To determine exactly how long Hillary has to live, The ENQUIRER used a “longevity calculator” created by University of Pennsylvania.

Based on the information from Hillary’s secret medical file, the results showed that Hillary has “already exceeded her life expectancy” — and it’s unlikely she’ll make it to her 69th birthday on Oct. 26, 2016 — less than two weeks before the presidential election day on Nov. 8.

Said the source: “Some insiders with knowledge of her medical state believe that Hillary could even be dead in six months’ time.”

Dr. Fischer, who has not treated Hillary, said: “Her fainting, blackouts, headaches and collapses are consistent with serious vascular blood flow problems in her brain.”

Added the source: “Sadly, instead of a presidential inauguration, Hillary’s going to get a state funeral.”


No Serious Health Issues for Hillary Clinton, Her Doctor Reports

Updated, 9:52 p.m. | Hillary Rodham Clinton’s campaign released a letter on Friday from her doctor attesting to Mrs. Clinton’s good health and fitness to serve as president based on a full medical evaluation.

The letter from Dr. Lisa Bardack of Mount Kisco, N.Y., summarized Mrs. Clinton’s history of treatment for a brain concussion, blood clots affecting her legs and brain on separate occasions, an underactive thyroid gland and a family history of heart disease.

Mrs. Clinton has faced questions about her health since 2012, when, as secretary of state, she suffered a concussion and a blood clot — known as a transverse sinus venous thrombosis — in her brain. Those were a result of a series of events caused by a stomach virus Mrs. Clinton acquired while traveling abroad. While alone in her home after returning, she became dehydrated and then fell from a faint, striking her head. She subsequently experienced double vision and temporarily wore glasses with a Fresnel Prism to ease the difficulty with her eyesight.

Mrs. Clinton was treated at George Washington University Hospital in Washington, and then went to NewYork-Presbyterian/Columbia hospital in Manhattan before returning to her home in Chappaqua, N.Y.

But former President Bill Clinton told a reporter that his wife’s concussion “required six months of very serious work to get over” and that she had “never lowballed” the severity of her head injury.

Follow-up testing in 2013 showed “complete resolution of the effects of the concussion, as well as total dissolution” of the blood clot, Dr. Bardack wrote. Mrs. Clinton did not release statements from a neurologist, neurosurgeon or other specialist involved in her medical care in Washington or New York.

Mrs. Clinton is the first presidential candidate in this cycle to make public a medical history. But in the past many candidates have released copies of extensive records, agreed to personal interviews or allowed their doctors to be interviewed.

Nick Merrill, a spokesman for Mrs. Clinton, did not reply to an email request to interview Dr. Bardack.

While Mrs. Clinton experienced blood clots in 1998, 2009 and 2012, tests showed that she did not have any underlying disorder that put her at an increased risk of the clots. Tests are performed to monitor the dose of Coumadin she takes and ensure that she has not experienced side effects, Dr. Bardack wrote.

Mrs. Clinton’s electrocardiogram was reported as normal, as were her blood lipids. Cancer screening tests, including mammography, breast ultrasound, colonoscopy and gynecological examination were normal.

Dr. Bardack did not disclose Mrs. Clinton’s height and weight, which are standard items in medical histories.

She said Mrs. Clinton eats a diet rich in lean protein, vegetables and fruits. She exercises regularly, including yoga, swimming, walking and weight training.
Posted by arclein at 12:00 AM

I feel Bil is pressing killery to continue to run and should she win the POTUS, she will ask Bill to be vice-POTUS. Then he is hoping that her declining health will cause her to become in-compasitated and Bill will take over as POTUS which is what he has wanted for a long time.