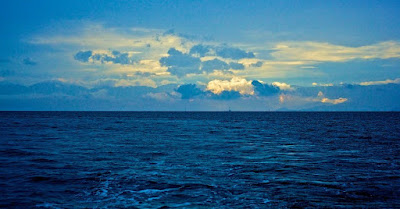 What i am conscious of is that several times in history, Europe has been hit by an almost overnight Cold snap that froze major rivers.

So this cold mass of water has to be concerning inasmuch as it may well trigger a short term alteration in the behavior of the gulf stream.

Has the flow south through Davis Strait increased?  At the moment i do not trust any of the explanations or conjectures at all.
.

Some scientists are saying new data from the National Oceanic and Atmospheric Administration could point to weakening of a North Atlantic ocean current
by  Sarah Lazare, staff writer

http://www.commondreams.org/news/2015/09/25/record-cold-blob-north-atlantic-sign-future-climate-woes
"If the ocean continues to accumulate heat and increase melting of marine-terminating ice shelves of Antarctica and Greenland, a point will be reached at which it is impossible to avoid large scale ice sheet disintegration with sea level rise of at least several meters," climate scientists warned in July. (Photo: Anderson Mancini/flickr/cc)

Some scientists are saying that a record-setting area of cold water in the North Atlantic, revealed by recent National Oceanic and Atmospheric Administration (NOAA) data, could be a sign that climate change is causing the ocean current to weaken.

This trend could have dramatic consequences, including the alteration of temperatures on the European and North American continents.

Washington Post reporter Chris Mooney highlighted the thesis on Thursday, pointing out a cold blob in the ocean south of Greenland and Iceland. While NOAA's findings that 2015 has so far seen the hottest eight month stretch in recorded history were widely publicized, the North Atlantic cold spot is lesser known. It is seen below in the dark hue denoting "record coldest" temperatures.

Deke Arndt, chief of the climate monitoring branch at NOAA’s National Centers for Environmental Information, confirmed to Mooney that the cold temperatures are not a fluke, stating: "For the grid boxes in darkest blue, they had their coldest Jan-Aug on record, and in order for a grid box to be 'eligible' for that map, it needs at least 80 years of Jan-Aug values on the record."

Prior studies have predicted such a trend. Climate scientists Stefan Rahmstorf (Potsdam Institute for Climate Impact Research) and Michael Mann (Penn State) published a paper in the March issue of Nature Climate Change which found that the Atlantic Meridional Overturning Circulation, or AMOC, is growing weaker.

The scientists hypothesized that "conspicuous cooling" in the northern Atlantic could be "due to a reduction in the AMOC over the twentieth century and particularly after 1970." A possible contributor to this trend is the "melting of the Greenland Ice Sheet," which they say is infusing the area with cold, fresh water, which is then interfering with the interplay between the varying temperatures and levels of salinity that drive the current.

Mooney is careful to point out that there is no scientific consensus, as of yet, that the cold spot identified in NOAA's data is a clear result of the trend highlighted by Rahmstorf and Mann. But here's what Mann had to say:


I was formerly somewhat skeptical about the notion that the ocean 'conveyor belt' circulation pattern could weaken abruptly in response to global warming. Yet this now appears to be underway, as we showed in a recent article, and as we now appear to be witnessing before our very eyes in the form of an anomalous blob of cold water in the sup-polar North Atlantic.

Mooney writes that, if this trend continues, "there could be many consequences, including rising seas for the U.S. East Coast and, possibly, a difference in temperature overall in the North Atlantic and Europe."

A paper written in July by former NASA scientist James Hansen and 16 other prominent climate researchers, which had not been peer reviewed, speculated: "If the ocean continues to accumulate heat and increase melting of marine-terminating ice shelves of Antarctica and Greenland, a point will be reached at which it is impossible to avoid large scale ice sheet disintegration with sea level rise of at least several meters."
Posted by arclein at 12:00 AM