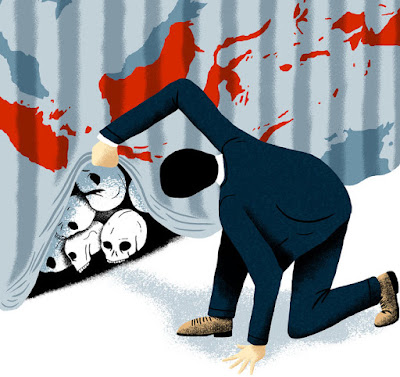 We hold the developing world to a different standard and then the war with the threat of communism was not a straw man.  Worse, Communism made a practice of massive genocide. Why have we forgotten that?

If anything Vietnam was the exception more or less when they imposed reeducation camps intead which happens to be an acceptable choice.  After all that is how we de Nazified Germany. Prior to that we had North Korea and Cuba and then there was Stalin.  Thus the choice in the early sixties was pretty stark for Suharto when a large body of the population was at least sympathetic.  Now we would never go there although it is obvious that ISIS would.

Yet it still needs to be recognized and redressed.  Ethnic hatreds still exist here and this provides a way forward.

This week marks the 50th anniversary of the beginning of a mass slaughter in Indonesia. With American support, more than 500,000 people were murdered by the Indonesian Army and its civilian death squads. At least 750,000 more were tortured and sent to concentration camps, many for decades.

The victims were accused of being “communists,” an umbrella that included not only members of the legally registered Communist Party, but all likely opponents of Suharto’s new military regime — from union members and women’s rights activists to teachers and the ethnic Chinese. Unlike in Germany, Rwanda or Cambodia, there have been no trials, no truth-and-reconciliation commissions, no memorials to the victims. Instead, many perpetrators still hold power throughout the country.

Indonesia is the world’s fourth most populous nation, and if it is to become the democracy it claims to be, this impunity must end. The anniversary is a moment for the United States to support Indonesia’s democratic transition by acknowledging the 1965 genocide, and encouraging a process of truth, reconciliation and justice.

On Oct. 1, 1965, six army generals in Jakarta were killed by a group of disaffected junior officers. Maj. Gen. Suharto assumed command of the armed forces, blamed the killings on the leftists, and set in motion a killing machine. Millions of people associated with left-leaning organizations were targeted, and the nation dissolved into terror — people even stopped eating fish for fear that fish were eating corpses. Suharto usurped President Sukarno’s authority and established himself as de facto president by March 1966. From the very beginning, he enjoyed the full support of the United States.

I’ve spent 12 years investigating the terrible legacy of the genocide, creating two documentary films, “The Act of Killing” in 2013 and “The Look of Silence,” released earlier this year. I began in 2003, working with a family of survivors. We wanted to show what it is like to live surrounded by still-powerful perpetrators who had murdered your loved ones.

The family gathered other survivors to tell their stories, but the army warned them not to participate. Many survivors urged me not to give up and suggested that I film perpetrators in hopes that they would reveal details of the massacres.

I did not know if it was safe to approach the killers, but when I did, I found them open. They offered boastful accounts of the killings, often with smiles on their faces and in front of their grandchildren. I felt I had wandered into Germany 40 years after the Holocaust, only to find the Nazis still in power.

Today, former political prisoners from this era still face discrimination and threats. Gatherings of elderly survivors are regularly attacked by military-backed thugs. Schoolchildren are still taught that the “extermination of the communists” was heroic, and that victims’ families should be monitored for disloyalty. This official history, in effect, legitimizes violence against a whole segment of society.

The purpose of such intimidation is to create a climate of fear in which corruption and plunder go unchallenged. Inevitably in such an atmosphere, human rights violations have continued since 1965, including the 1975-1999 occupation of East Timor, where enforced starvation contributed to the killing of nearly a third of the population, as well as torture and extrajudicial killing that go on in West Papua today.

Military rule in Indonesia formally ended in 1998, but the army remains above the law. If a general orders an entire village massacred, he cannot be tried in civilian courts. The only way he could face justice is if the army itself convenes a military tribunal, or if Parliament establishes a special human rights court — something it has never done fairly and effectively.

With the military not subject to law, a shadow state of paramilitaries and intelligence agencies has formed around it. This shadow state continues to intimidate the public into silence while, together with its business partners, it loots the national wealth.


Indonesia can hold regular elections, but if the laws do not apply to the most powerful elements in society, then there is no rule of law, and no genuine democracy. The country will never become a true democracy until it takes serious steps to end impunity. An essential start is a process of truth, reconciliation and justice.

This may still be possible. The Indonesian media, which used to shy from discussing the genocide, now refers to the killings as crimes against humanity, and grassroots activism has taken hold. The current president, Joko Widodo, indicated he would address the 1965 massacre, but he has not established a truth commission, issued a national apology, or taken any other steps to end the military’s impunity.

We need truth and accountability from the United States as well. U.S. involvement dates at least to an April 1962 meeting between American and British officials resulting in the decision to “liquidate” President Sukarno, the populist — but not communist — founding father of Indonesia. As a founder of the nonaligned movement, Sukarno favored socialist policies; Washington wanted to replace him with someone more deferential to Western strategic and commercial interests.

The United States conducted covert operations to destabilize Sukarno and strengthen the military. Then, when genocide broke out, America provided equipment, weapons and money. The United States compiled lists containing thousands of names of public figures likely to oppose the new military regime, and handed them over to the Indonesian military, presumably with the expectation that they would be killed. Western aid to Suharto’s dictatorship, ultimately amounting to tens of billions of dollars, began flowing while corpses still clogged Indonesia’s rivers. The American media celebrated Suharto’s rise and his campaign of death. Time magazine said it was the “best news for years in Asia.”

But the extent of America’s role remains hidden behind a wall of secrecy: C.I.A. documents and U.S. defense attaché papers remain classified. Numerous Freedom of Information Act requests for these documents have been denied. Senator Tom Udall, Democrat of New Mexico, will soon reintroduce a resolution that, if passed, would acknowledge America’s role in the atrocities, call for declassification of all relevant documents, and urge the Indonesian government to acknowledge the massacres and establish a truth commission. If the U.S. government recognizes the genocide publicly, acknowledges its role in the crimes, and releases all documents pertaining to the issue, it will encourage the Indonesian government to do the same.

This anniversary should be a reminder that although we want to move on, although nothing will wake the dead or make whole what has been broken, we must stop, honor the lives destroyed, acknowledge our role in the destruction, and allow the healing process to begin.
Posted by arclein at 12:00 AM