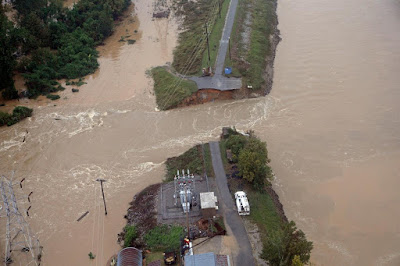 Two things needs to be mandated as a national policy.

Two things need to happen. The first is that we need a national watershed management rehabilitation and mangement protocol laid down and used to guide funding. The second is that we need a dam removal program, probably as part of the EPA's Superfund program that is used to cleanup nineteenth century abandoned mining operations in particular.

Dam removal is necessary but so also is a significant set back from waters edge throughout the drainage system that is maintained as forest were possible and wild land otherwise.

That is the big picture, but locally we need local communities to take posession of these ecologies to bring them back on line as productive assets and to maintain them. .

South Carolina is the latest place to suffer from a wave of dam catastrophes.

Floodwaters have washed out infrastructure in South Carolina, as seen in Columbia on October 5.

More than a dozen dams have failed this week in South Carolina amid catastrophic flooding that has destroyed homes and businesses and left more than a dozen people dead. Authorities are warning that additional failures are possible. The ultimate cause is too much rainfall over a short period, but the disaster also points to longer-term problems in infrastructure that are putting thousands of people at risk around the world.

The structures that have failed in South Carolina are like the vast majority of dams around the world: they are made of earth.

“When people think of a dam they often think of a giant concrete structure, like Hoover or Coulee Dam, but the vast majority are made of earthen materials,” says John France, National Dam Practice Leader with the international firm AECOM and a member of the American Society of Civil Engineers.

Earthen dams may work fine for many years, but they require proper design and maintenance, notes France. They fail quickly if they are overtopped by rising water, which erodes their walls and causes them to collapse. Thousands of people have been killed by rapid earthen dam or levee failure, including in New Orleans during Hurricane Katrina in 2005.

A number of other factors contribute to these catastrophic losses, including:

1. Changes in Land Use

The most important factor in whether a dam will fail is the amount of water that it has to hold back, says Norbert Delatte, a professor of civil engineering at Cleveland State University who has written and edited several books on the subject.

Storm events can dramatically swell that amount of water, but the impact isn’t random. Dams are designed and built based on the state of the watershed at the time, Delatte notes. So when the landscape is changed, it can have a big impact on how quickly water is absorbed into the ground or runs off, toward the dam.

The U.S. currently has about 84,000 dams. Most of them were built decades ago, and were surrounded by rainfall-absorbing forests at the time. Development, which can turn forests into farmland or tracts of housing, can lead to more runoff going to dams.

Giulio Boccaletti, the Global Water Director for the Nature Conservancy, says this trend can be reversed by planting trees in key areas around dams. “We can be highly effective at reducing flood risk by anticipating and working with nature rather than trying to defeat it,” says Boccaletti.

A dam near homes in Columbia is overtopped by flooding on October 6.
Photograph by Chuck Burton, Associated Press

Shifting weather patterns can also put more strain on dams, as some areas get wetter while others get drier.

“The engineering community is working on this problem, but right now we don’t have good models that tell us how much to adjust our plans based on changing climate,” says France.

Designing for so-called 100-year or 500-year floods has been an imperfect process, France notes, in part because our understanding of weather and climate is always improving. “Historic trends haven’t always been the best predictors of what’s possible in the future,” France says. (This week’s South Carolina storm has qualified as a 1,000-year event in some areas, meaning in a given year there is a 1 in 1,000 chance of getting this much rainfall.)

And yet engineers face significant funding and size restrictions that prevent them from designing for every conceivable problem.

“If we built every structure for 1,000-year events we could maybe build ten percent as many structures,” says Delatte.

Dam design has also improved over the past century, although many communities can’t afford to replace their old dams with the latest technology.

Newer earthen dams, for instance, are built with the filter design, which puts progressively coarser material toward the interior of the walls. That allows a small amount of water to seep into the dam but prevents the smaller grains from moving with it, locking them in place.

Newer dams also have concrete spillways and/or sluice pipes that drain excess water off without leading to failure. With better weather forecasting, dam operators can also better prepare by drawing down the reservoir lower before a storm even starts.

The trouble is that there isn’t enough money available to retrofit all of the dams out there, says Delatte. “More work needs to be done to identify the most risky ones and start with those,” he says.

David Linnen tries to clear a drain in Georgetown, South Carolina, on October 4 after his neighborhood flooded.

4. Lack of Maintenance and Funding

Unlike roads, which are largely paid for with a regular excise tax on gasoline, dams have historically had more haphazard funding. But relying on the whims of Congress has left a long backlog of funding and maintenance.

The American Society of Civil Engineers gives the nation’s dams an overall grade of D, in large part because of that backlog.

Another problem is the rising number of orphan dams, which no longer serve a useful purpose and often end up in a state of disrepair. Although there is a growing movement to remove such structures, in part to restore wildlife habitat, the process is expensive and funding is limited.

Dam building is about risk and reliability, says Delatte. “You can't make anything perfectly safe when you are dealing with unknown events like water, wind, and earthquakes,” he says.

Watch a spectacular time-lapse of the removal of Washington's Condit Dam in 2011.