Donald Trump: The only Presidential Candidate to Tell the Truth about Vaccines 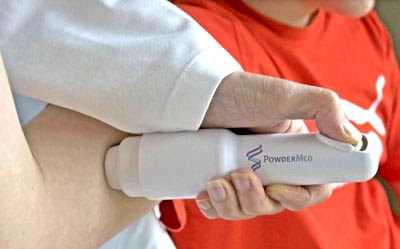 We have all been vaccinated but not aggressively as has been the recent practice.  It shouts both risk and cause for the recent thirty percent jump in autism over the past two years.


What is more, a thirty percent jump is not a statistical anomaly but a bullet to the brain.  We have a problem and it is a huge problem.  That the CDC is not screaming is astonishing in itself considering how they screamed for a non existent flue epidemic a while back.  That was based of slight statistical evidence if any at all.


Trump is handling it the best way possible.  Claim the counter argument loudly and dare the other side to sue.  Either way we may get a sense of urgency?

Donald Trump: The only presidential candidate to tell the truth about vaccines

(NaturalNews) Donald Trump is the only presidential candidate willing to tell the truth about vaccines.

Trump stated elsewhere that autism is an epidemic, and that the link between vaccines and the disease is real. Meanwhile, other presidential candidates claim that vaccines are harmless. The debate isn't centered on whether vaccines are safe, but whether they should be a choice or mandatory.

Trump cut through the obscurantism as reflected in his tweets:

The mainstream media casts anyone who even suggests that vaccines might be linked to autism to the lunatic fringe. What is ironic is that Trump's remarks were made hours after the Center for Disease Control (CDC) issued a report noting that autism rates had spiked 30 percent in American children in the last two years.

[ Such a violent shift is not possible unless something is causing it. arclein ]

Fortunately, Trump is willing to expose the link between vaccines and autism that the CDC refuses to acknowledge. This isn't the first time Trump has publicly denounced vaccines, however. In 2012, Trump went on Fox News stating that he believed "monster vaccines" are linked to autism.

"I've gotten to be pretty familiar with the subject. You know, I have a theory, and it's a theory that some people believe in, and that's the vaccinations. We never had anything like this. This is now an epidemic. It's way, way up over the past 10 years. It's way up over the past two years," Trump stated.

Trump recognized that his views went against what most physicians were willing to admit. "But I couldn't care less," said Trump. "I've seen people where they have a perfectly healthy child, and they go for the vaccinations and a month later the child is no longer healthy."

Other presidential candidates refuse to acknowledge dangers of vaccines

Trump's remarks are a major victory for children, and the parents of children, who have been victims of vaccines. Unfortunately, practically all the other presidential candidates continue to push vaccines.

In 2007, for example, Rick Perry was the first governor to sign legislation that would require girls to get a vaccine against the human papillomavirus (HPV). Fortunately, the bill was overturned. Perry later acknowledged that the bill was a mistake in the 2012 presidential election.

Presidential candidate Jed Bush made his views on vaccine crystal clear in a Q&A after a speech in Detroit: "Parents ought to make sure their children are vaccinated," Bush said tersely. "Do we need to get into any more detail than that?" he added.

Even presidential candidate Rand Paul, who has been criticized for his conviction that vaccines ought to be a choice rather than mandatory, has publicly endorsed vaccines.

Trump is one of the few presidential candidates to publicly attest to the dangers of vaccines. Indeed, when it comes to the vaccine debate — Trump definitely trumps his fellow candidates.

http://www.naturalnews.com/051527_Donald_Trump_vaccines_autism.html#ixzz3oOStIEFa
Posted by arclein at 12:00 AM