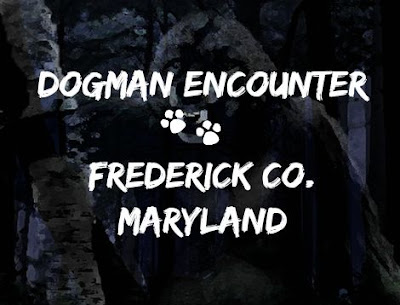 Every once in a while i am reminded why it is important to read every plausible sighting report.  This one finally gives me the expected front paw description which needs to conform to a two long clawed grasper ideal for arboreal travel.  We have finally seen the two toed track a month ago as well.

I have found that every good report will add about one key observation.  Of course, after the first twenty or so sightings, you have a good working conjecture.  In this case we are seeing the giant sloth. This demanded a two toe track sooner or later.  As it turned out, it was better late than never.  now we have a hand profile that indicates the extended claws.

The Giant Sloth conjecture keeps getting stronger and more secure.

The following personal account was offered by the witness...who is now a part of the central Pennsylvania bi-pedal canine investigation team:

I am not making an official report because it was so long ago, and I have always brushed this incident off. At the time I was only about 8-11 years old, and I can't recall what year exactly (1960-1963) since this was many years ago and nobody believed me since I was a kid. I was spending the summer at my Grandma's house on Shank Rd. in Middletown, MD (Frederick Co.)...as I had for a couple of years in a row. I welcomed the summers I spent with grandma...except for the darn outhouse. If I had to go at night, I was a nuisance having to take Grandma with me which meant waking her up. It was an awful part of being there.

One late night I had to get up to use the outhouse, and it was stark black outside. No lamp posts or outdoor lighting lined the main lane. Grandma had electricity, but it was only for the house inside, oven, and appliances. She had a TV, a very old floor model and nobody watched it anyway, since there was not much TV on the Maryland airwaves back in the early 1960s. It had to be like 3 am when I ventured outside. I didn't take a flashlight and I didn't want to wake Grandma up for finding the flashlight or for her to walk me to the outhouse.

The outhouse was located far from the main grouping of structures on the property and the main house...for obvious reasons. It was not a full moon, more like a half moon that night, but enough night time illumination in the sky that my eyes adjusted quickly to see the grounds. I could easily navigate my way using Grandmas long and narrow flower garden as a guiding trail. My biggest fear was of black snakes & copper heads because I was warned constantly to look out for them.

I made it down to the outhouse and don't even remember hearing the usual night noises like crickets or owls, it seemed almost too quiet. I was a sharp and smart kid with a great imagination, but not enough to make this story up. I felt an uncanny sensation of being watched and I started to get scared. I left the outhouse, peeked outside first, and for some reason I wanted to run back to the house, getting to safety as quickly as possible. It was a rough and long run and I tired quickly and began walking the last few hundred feet to the porch of the house. Something told me to look back where I had been...to this day I wished I hadn't.

What I saw was an impossible sight. This animal stepping through the backyard of Grandma's property, just past the garden about ten feet past the outhouse. It was this upright furry creature with a dog-wolf head! I have owned German Shepherds from the age of 7 so the head was almost similar to the ears and snoot of a German Shepherd dog. I stopped dead in my tracks, not believing my eyes because it was impossible! It had arms that had claw-like hands that hung out in front of it. As it turned its head and looked right at me, the eyes looked yellow and super reflective. Chills shot up my spine as it quickly walked on two legs (that looked like real dog legs bending backwards) traveling from left to right, past her garden, into the old, gravel lane, then across into the thicket of the woods where it disappeared. I heard the rustling through the weeds. It may have initially traveled from the usually full cow pasture that was up an incline, past the spring, and up to the cow pasture that was behind Grandmas house. I shudder to think it was hiding behind the outhouse I was in, but that is a distinct possibility as well!

Ever since that night, after being teased of the cliche of seeing the 'big bad wolf at Grandmas house,' nobody believed me and thought I made up the story for attention, like the imaginary friend syndrome of kids. From those teasing me, I just put it all behind me, buried the story forever, and never told another human being this tale until now. I just turned 62 years old this year, and it am sharing this tale with you now. Like I said, it's too late now to submit an official report, I can't even remember which year it occurred, but I will never forget that creature until the day I die!