Yes, Syria is a gambit that allows Russian client Assad to recover his country.  The opposition on the ground is a joke waiting to be rolled up in a surge.  We are now having the surge.  Do not be surprised to see Russian ground troops.


If you permit a vacuum, it becomes necessary for someone to fill it.  That has typically been the USA if anyone really cares.  Remember Somalia?  Here we allowed a vacuum and that allowed ISIS and the faux revolt against Assad which had to be the most ill thought out sponsorship ever.


Now Russia has seen fit to end it.  Instantly the USA got their proxies out of dodge and left their erstwhile rebels in the lurch.  The ill begotten policy entered in stealth is been left in stealth.  Had the USA intervened the picture would be the same.


No one is going to repeat the USA folly of trying to run the place after knocking over the military threat.  I think even the USA is cured.
.

Death of the Petrodollar — Long Live the Petroyuan

Two years ago, first in low whispers and then pounding the table with outrage, the United States financial world began discussing the possibility of a world-changing phenomenon. It was the end of the system that has vastly favored the U.S. dollar as the world's reserve currency.

For over 40 years, oil was traded in U.S. dollars, which forced almost every country to buy U.S. debt. On June 9th, 2015, Russia, China, and Iran stopped. Goldman Sachs says this will impact everything from geopolitics to global capital flows to safe-haven status.

But Obama's pain can be your gain. Read this special report.

President Obama and the United States are tired of war. After 14 years of meddling in the Middle East, accomplishing nothing, and spending a trillion dollars, the action plan seems to be talk a lot and carry a wee branch.

Into this vacuum has stepped Vladimir Putin. You know he has a plan even though we aren’t sure what it is yet.

We do know it will tweak the nose of NATO. It will establish Russia as a player in the Middle East, make a fool of Obama, and lastly — though I'm not sure how exactly — it will ramp up the price of crude oil.

The reason Putin will succeed where the US failed in its war on ISIS, is because the Russian air-strikes are going to be accompanied by a formidable mop-up operation that will overpower the jihadi groups on the ground. This is already happening as we speak. The Russian Air Force has been pounding terrorist targets across the Idlib Governorate for the last few days as well as ISIS strongholds in the East at Raffa. On Sunday, according to a report filed by South Front, roughly 700 militants surrendered to members of the 147th Syrian tank brigade shortly after bombers had attacked nearly cities of Mardeij, Ma’arat Al-Nu’man, Jisr Al-Shughour, Saraqib and Sarmeen. This is the pattern we expect to see in the weeks ahead. Russian bombers will soften targets on the frontlines, ground troops will move into position, and untold numbers of jihadis will either flee, surrender or get cut down where they stand. Bottom line: Syria is not going to be a quagmire as the media has predicted. To the contrary, Putin is going to cut through these guys like crap through a goose...

He’s going to nail these guys while he has them in his gun-sights, then he’s going to wrap it up and go home. By the time the Obama crew get’s its act together and realizes that they have to stop the bombing pronto or their whole regime change operation is going to go up in smoke, Putin’s going to be blowing kisses from atop a float ambling through Red Square in Moscow’s first tickertape parade since the end of WW2.

In other words, Putin has a plan, and it is going to work. The question is how to play it.

I've been buying Russian companies for about six months now, as they are incredibly cheap, the rubble has stabilized, and the charts are bullish. 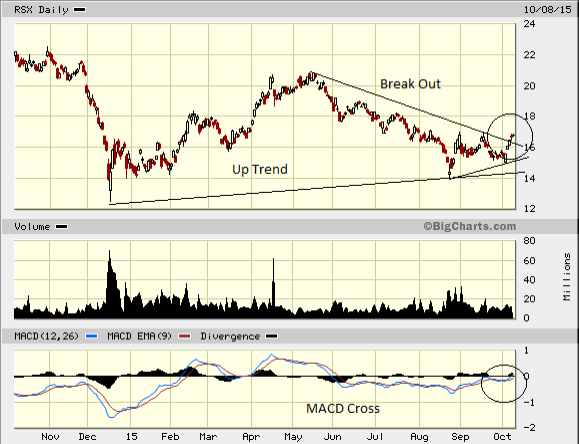 As you can see, the ETF broke out of its downtrend and is putting in higher highs and higher lows. The MACD shows momentum is on our side. 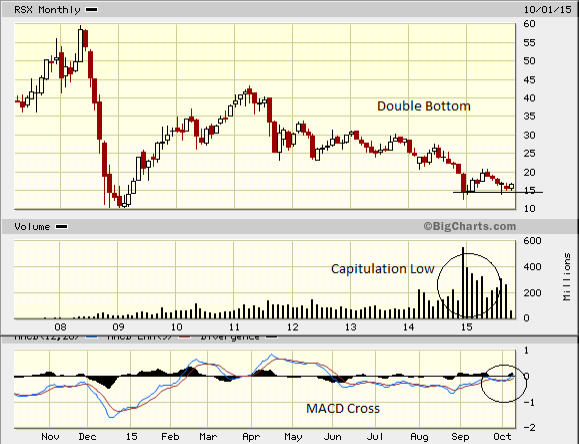 You can see that in the last year, we put in a double bottom. There was vast volume last year as every trader puked out their Russian shares. This is called a capitulation low, and it is a turnaround signal.
Yes, there is a chance we could retest those 2009 lows, so put your stop-loss in around $13.40. That said, there is a better chance we can see $30 by this time next year.

Russian stocks could go up sharply simply due to a successful Russia/Syria gambit. Furthermore, higher oil prices would be good for Russian stocks.

There are an infinite number of scenarios that could cause uncertainty in the oil markets as the top-four oil producers sling jets into the same geographic sandbox.

Saudi Arabian clerics have already declared a jihad on Russia. Turkey has threatened Russia with sanctions if its airspace is invaded again. Iran is amassing troops to send through Iraq.

And today it was announced that China has joined Russia in its airstrikes against ISIS. It seems they want to test out their J-15 warplanes launched off the Liaoning-CV-16 aircraft carrier, which has been off the coast of Syria since late September.

The geopolitical realities get messier when you consider Israel.

No one knows how the situation will end. You can make a nice bet, however, that Russia stocks will go up when videos of Putin riding the front of a T-99 battle tank through Red Square are running on CNN for a week.
Posted by arclein at 12:00 AM