The Story of Fascism: Rick Steves’ Documentary Helps Us Learn from the Hard Lessons of the 20th Century 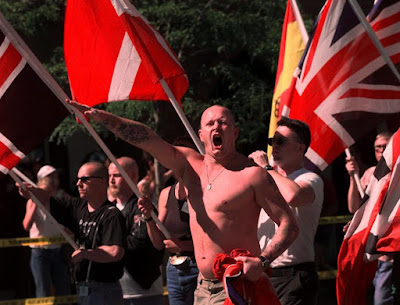 This is a timely oblique look at fascism from our well known travelogue leader who is no stranger to the roads and streets of Fascism.  It is also fading from memory as the last who saw it all happen are now leaving the scene.dusty textbooks fail miserably to  capture the immediacy of the historic movements themselves.

Today their imitators are about again with Antifa and BLM.  Their removal with extreme prejudice is pending.  Yet it has been allowed to even play out.

Recall Trump is an expert on the nature of Fascist political theory and understand what is happeneing better than anyone.

The Story of Fascism: Rick Steves’ Documentary Helps Us Learn from the Hard Lessons of the 20th Century

From Rick Steves comes a thought-provoking documentary that revisits the rise of fascism in Europe, reminding us of how charismatic figures like Benito Mussolini and Adolf Hitler came to power by promising to create a better future for their frustrated, economically-depressed countries–a future that recaptured the glory of some mythologized past. Once in power, these fascist leaders replaced democracy with a cult of personality, steadily eroded democratic norms and truth, ratcheted up violence, and found scapegoats to victimize–something facilitated by the spread of conspiracy theories and propaganda through modern media. They would lead their nations into war, and ultimately ruin, but not before creating a playbook for other charismatic autocrats who entice voters with simplistic solutions to complex problems.

Originally aired on television, Steves has released the documentary on YouTube, hoping that 21st century citizens can “learn from the hard lessons of 20th-century Europe.” The text accompanying his documentary reads as follows:

In this one-hour special, Rick travels back a century to learn how fascism rose and then fell in Europe — taking millions of people with it. We’ll trace fascism’s history from its roots in the turbulent aftermath of World War I, when masses of angry people rose up, to the rise of charismatic leaders who manipulated that anger, the totalitarian societies they built, and the brutal measures they used to enforce their ideology. We’ll see the horrific consequences: genocide and total war. And we’ll be inspired by the stories of those who resisted. Along the way, we’ll visit poignant sights throughout Europe relating to fascism, and talk with Europeans whose families lived through those times. Our goal: to learn from the hard lessons of 20th-century Europe, and to recognize that ideology in the 21st century.

The Story of Fascism (which will be added to our list of Free Documentaries) is recommended for students and adults alike. With World War II fading from living memory, we could use a good reminder, says Steves, of how “nationalism can be channeled into evil, and how our freedoms and democracies are not indestructible…in fact, they are fragile.”