Medicinal herbs in the treatment of neuropathic pain: a review 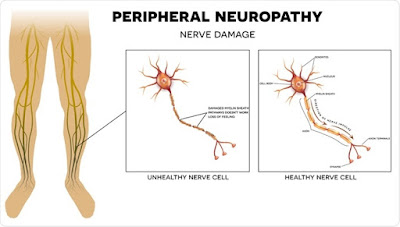 This is a useful inventory of agents that assist in dealing with neuropathy.
It is my opinion based of the pattern of evidence that we are dealing with toxin capture from dying cells impacting nerve ends where the toxins have actually accumulated.  Diabetic neuropathy is a clear cause effect example in which the cause is impacting the whole body, but with the toxins accumulating in the limbs in particular.  I do suspect that toxins will also activate incipiant conditions such as arcthritis.
what none of these protocols address is toxin removal which really needs to be better understood if my conjecture holds up.
So i throw this out as well.  You get the point.  We may well be dealing with an un identified metabolic toxin as well or a preferred pathway that needs to be minimized.  My point is that chasing inflamation is a proven dead end and only postpones accumulating toxin damage.
Full Body Detox: 9 Ways to Rejuvenate Your Body

Limit Alcohol. More than 90% of alcohol is metabolized in your liver ( 4 ). ...
Focus on Sleep. ...
Drink More Water. ...
Reduce Your Intake of Sugar and Processed Foods. ...
Eat Antioxidant-Rich Foods. ...
Eat Foods High in Prebiotics. ...
Decrease Your Salt Intake. ...
Get Active.
Medicinal herbs in the treatment of neuropathic pain: a review
Introduction
Pain, an unpleasant sensation and emotional experience that in our daily life, is an alert of tissue injury to prevent further or impending tissue damage (1). Acute pain is a useful biologic purpose and self-limiting in nature that arises in response to a specific injury. Chronic pain, in contrast, may be considered as a disease state. It may outlast the usual duration of recovery, if accompanied with a disease or injury (1, 2). The definition of chronic neuropathic pain is “pain that comes from direct consequence of a lesion or disease which affect the somatosensory system” (3). It may be classified as central or peripheral, depending on the site of the lesion. The most causes of chronic neuropathic pain are metabolic disease, viral, trauma, severe ischemic insults, and autoimmune diseases (4-6).
Neuropathic pain usually does not have effective treatment, because of heterogeneous etiology and complex underlying pathophysiology, moreover, the unwanted side effect profiles limit the use of available drugs (7-9).
Neuropathic pain and underlying mechanisms
Neuropathic pain may be spontaneous or evoked in response to physical stimuli, that may manifest as increased sensitivity to pain (hyperalgesia) or as a pain evoked by a nonpainful stimuli (allodynia) (5, 10). Once injury occurs, inflammation and reparatory processes ensue, leads to a hyperexcitable state known as peripheral sensitization. Many types of peripheral mechanisms have been described, in most patients, this state resolves as healing occurs and inflammation subsides. But, stimulation from ongoing injury or disease lead to persist nociception, then the changes in primary afferent neurons may continue (11). Central changes can result from peripheral nerve lesions, which have been investigated in animals mainly at the spinal cord or sometimes at supraspinal levels (12, 13).
Several types of alterations can induce pathologic activation of central nociceptive neurons: such as neuroplasticity, microglial activation and hyper-excitability (central sensitization) of nociceptive neurons. Central sensitization possibly depends critically on intracellular changing that induced by the activation of N-methyl-D-aspartate (NMDA) and glutamate metabotropic receptors (12, 13). The stimulation of non-neuronal cells, microglia in central and macrophages in periphery, leads to production of a variety inflammatory cytokines and chemokines which play critical roles in neuropathic pain condition (14, 15).
Neuropathic pain and herbal medicinal products
The usage of natural products, principally herbal medicines is one of the ancient therapies used by humanity (16). During the recent years, people are eager to use herbal medicines due to their lower complications and fewer side effects than synthetic drugs (17). Regarding to the increasing demand for medicinal plants and related compounds the phytopharmaceutical studies and the use of these remedies for the management of painful neuropathy have been growing throughout the world (18).
Animal models and/or pharmacological mechanisms of neuropathic pain
Animal models of neuropathic pain have been essential in the exploration of molecular mechanisms of pain also for the analysis of novel analgesics in the treatment of chronic pain (19). The animal models for studying neuropathic pain and a brief description of each model are as follows:
The streptozotocin (STZ)-induced diabetes
The STZ-induced diabetic neuropathic pain model mimics the diabetic neuropathy. This neuropathy is one of the most frequent peripheral neuropathies associated with hyperalgesia, cold or hot allodynia and hyperesthesia, the high blood glucose level induced oxidative and nitrosative stress which have been proposed to be an essential mechanism of neuronal injury related to diabetic neuropathy (20-22). Reactive oxygen species (ROS) enhanced nociceptors sensitization so that they not only respond more vigorously towards noxious stimuli, but also start to respond towards normally subthreshold stimuli. This peripheral sensitization not only induces pain directly but furthermore induces central sensitization in the spinal cord, which also indirectly contributes to pain (7, 23). In high concentrations superoxide combine with nitric oxide to form peroxynitrite, which is implicated in diabetes accompanied by motor and sensory nerve conduction deficits, in addition to peripheral nerve energy deficiency (7, 24).
High-fat diet
High-fat diet is an important risk factor for nerve conduction velocity deficit and small sensory fiber neuropathy with alimentary obesity, hyperinsulinemia, and impaired glucose tolerance develops neuronal damage resulting from oxidative stress of lipid metabolism and indicate increased sorbitol pathway activity, oxidative-nitrosative stress, and pro-inflammatory changes in peripheral nervous system (PNS) (25, 26). This model has been used in studies on pathophysiology of impaired glucose tolerance (IGT) and type 2 diabetes and for development of new treatments (27).
Neuropathy produced by sciatic nerve injury
The experimental model of neuropathy produced by sciatic nerve injury in animals mimic symptoms observed in human beings with nerve injury, and this model is widely used in behavioral examination. In this model, prolonged changes in neurotransmitter and receptor expression, lead to produce central sensitization in response towards the release of numerous inflammatory and pain mediators observed, which in turn enhances the sensitivity of peripheral sensory afferents at the site of injury and also in the CNS (7).
Chemotherapy-induced peripheral neuropathy
Peripheral neuropathy is a common side effect of many classes of anti-cancer drugs, the major classes of chemotherapy drugs that induce peripheral neuropathy (CIPN) including the antitubulins (paclitaxel, docetaxel, ixabepilone, and vincristine), platinum analogs (oxaliplatin, carboplatin, and cisplatin), and the proteasome inhibitors such as bortezomib and thalidomide. These drugs exert direct and indirect effects on sensory nerves to diminish the amplitude of action potential, slow conduction velocity and induce pain in patients, mainly those who experience nociceptive sensory loss through their cancer treatment (28, 29).

Chronic neuropathic pain is a common significant and debilitating problem that presents a major challenge to health-care. Despite the large number of available drugs, there are no curative conventional treatments for neuropathic pain. Nowadays, more attention has been focused on the herbal formulation in the field of drug discovery. Therefore, we performed an extensive review about herbal drugs and plants that exhibited protective effects on neuropathic pain. In this review, the beneficial effects of each plant in different neuropathic pain model, either in animals or in patients are reported. Moreover, the possible involved mechanisms for the protective effects are discussed. The more common plants which are used for the treatment of neuropathic pain are included as: Acorus calamus, Artemisia dracunculus, Butea monosperma, Citrullus colocynthis, Curcuma longa, Crocus sativus, Elaeagnus angustifolia, Ginkgo biloba, Mitragyna speciosa, Momordica charantia, Nigella sativa, Ocimum sanctum, Phyllanthus amarus, Pterodon pubescens Benth, Rubia cordifolia and Salvia officinalis. Furthermore, the most pathways which are known to be involved in pain relief by means of herbal remedies are anti-oxidant activity, anti-inflammatory, anti-apoptotic, neuroprotective and calcium inhibitory actions. In conclusion, this review suggests that some herbal plants can be suitable candidates for the treatment of neuropathic pain.