We are the inheriters of a long tradition of clothing manufacture.  Early forms have been superceded by superior tech and are  not seen now. Yet even our tropical brothers wear skins to protect their junk.  So all this goes back to hte whole history of humanity or around 200,000 years.
we all know about buckskin which was the go to for wilderness exploration.  Think thorn protection.  This also has a natural ice gae genesis as well.
The natural fibre we tend to forget about is cedar bark fiber.  This can be pulled out in long strips easily and then rough woven.  It easily forms a frame for a waterproof skin cover as well.  Nettles provide ample strong tread all as good as anything used today.
At the least, a woven cedar cloth would provide protection from hydrothermia in the worst conditions.. quite the same as a scottish wool tartan. And just what inspired all that?

What if the need for fabric, not food, in the face of a changing climate is what first tipped humanity towards agriculture?


The Tarkhan Dress is the world’s oldest woven garment with radiocarbon testing dating the garment to the late fourth-millennium BC. Image courtesy the Petrie Museum of Egyptian Archaeology, UCL


Ian Gilligan  is a prehistorian at the University of Sydney. He is the author of Climate, Clothing, and Agriculture in Prehistory: Linking Evidence, Causes, and Effects (2019).

Archaeologists and other scientists are beginning to unravel the story of our most intimate technology: clothing. They’re learning when and why our ancestors first started to wear clothes, and how their adoption was crucial to the evolutionary success of our ancestors when they faced climate change on a massive scale during the Pleistocene ice ages. These investigations have revealed a new twist to the story, assigning a much more prominent role to clothing than previously imagined. After the last ice age, global warming prompted people in many areas to change their clothes, from animal hides to textiles. This change in clothing material, I suspect, could be what triggered one of the greatest changes in the life of humanity. Not food but clothing led to the agricultural revolution.
My recent work shows that clothing wasn’t just the unique adaptation of a more-or-less hairless mammal to the changing natural environments. The development of clothing led to innovations with many repercussions for humanity, beyond survival in cold climates. A need for portable insulation from the cold in the Palaeolithic promoted major technological transitions. These include stone toolkits for working animal hides and, subsequently, bone tools such as pointed awls and needles to make tailored garments. Later, during the coldest stage of the last ice age, Homo sapiens in middle latitudes devised multi-layered outfits with an inner layer of underwear. Equipped with effective protection from wind chill, our species could penetrate into the frigid Arctic Circle, further north than cold-adapted Neanderthals had managed to venture. From the northeastern corner of Siberia, modern humans strolled across an exposed land bridge to enter Alaska by 15,000 years ago, if not earlier, to likely become the first hominins to set foot in the Americas. At the Broken Mammoth site in Alaska, archaeologists have unearthed the fragile technology that made the journey possible: a 13,000-year-old eyed needle.
Until recently, the scientific study of clothing was largely the work of physiologists who have explored its thermal properties, which are now well understood. The physiology of clothing allows us to say precisely how much clothing people must wear to survive at sub-freezing temperatures and at differing wind-chill levels. Early hominins in Africa had begun to harness fire between 1 and 2 million years ago, perhaps for cooking more than warmth. Fire was utilised as hominins spread into Europe and northern China, where Homo erectus retreated into caves to escape wind chill. However, even if earlier hominins were more hairy than modern humans, whenever they found themselves in cold conditions beyond certain well-defined survival thresholds, they needed to carry portable insulation while out in the open. For modern humans, exposure times for frostbite can be less than an hour, and life-threatening hypothermia can develop overnight, even in cities. From a thermal perspective, two aspects of clothing are important. First is the number of layers, with each extra layer increasing the total insulation value. The second aspect is whether garments are fitted, or tailored, to enclose the body, especially the limbs. Fitted garments offer superior protection from wind chill, a major risk factor for frostbite and hypothermia.
While clothing is one of the most visible of all human technologies, in the field of archaeology it’s almost invisible. Compared with stone tools surviving from the Lower Palaeolithic more than 3 million years ago, clothes perish rapidly and rarely survive beyond a single millennium. Among the notable exceptions are a pair of 3,000-year-old trousers worn by nomadic horse-riders in Central Asia, and a 5,000-year-old linen tunic from ancient Egypt. We have only a few precious cloth fragments from the early Neolithic, in Peru and Turkey. Not a shred of clothing survives from the Pleistocene, with just a few twisted flax fibres – used perhaps for strings or thread – found at a 34,000-year-old site in Georgia.
All the evidence we have for ice-age clothing is indirect but, nonetheless, the available evidence shows that people had tailored clothes in the last ice age. The world’s oldest eyed needles are found in southern Russia 40,000 years ago, and one needle in Denisova Cave is said to be 50,000 years old. In the vicinity of Moscow at a site called Sunghir, 30,000-year-old human burials have thousands of beads neatly arranged on the skeletons. Russian archaeologists think that these beads were sewn on to fitted garments, including trousers with legs and shirts with sleeves. Some of the skeletons appear to have two layers of garments, indicating the presence of multiple layers, so the Sunghir burials document the world’s oldest underwear. Artworks across Eurasia begin to show people wearing clothes from that time, including the so-called ‘Venus’ figurines.

The Venus of Willendorf figurine, estimated to be from around 25,000 years ago and now in the Natural History Museum, Vienna. Note the woven cap. Photo courtesy Wikipedia.
Scientific efforts to shed light on the prehistory of clothes have received an unexpected boost from another line of research, the study of clothing lice, or body lice. These blood-sucking insects make their home mainly on clothes and they evolved from head lice when people began to use clothes on a regular basis. Research teams in Germany and the United States analysed the genomes of head and clothing lice to estimate when the clothing parasites split from the head ones. One advantage of the lice research is that the results are independent from other sources of evidence about the origin of clothes, such as archaeology and palaeoclimatology. The German team, led by Mark Stoneking at the Max Planck Institute for Evolutionary Anthropology, came up with a date of 70,000 years ago, revised to 100,000 years ago, early in the last ice age. The US team led by David Reed at the University of Florida reported a similar date of around 80,000 years ago, and maybe as early as 170,000 years ago during the previous ice age. These findings from the lice research suggest that our habit of wearing clothes was established quite late in hominin evolution.
The research on lice is a welcome boon for investigating clothing origins but other lines of research, including archaeology, suggest the story is more complicated. Our ancestors probably started to wear clothes long before the last ice age, when species such as Neanderthals and Homo erectus endured cold winters during earlier glacial cycles dating back to the Early Pleistocene, more than 1 million years ago. The genetic analysis of modern clothing lice can inform us only about clothes worn routinely in some human populations up until the present day. Earlier hominins could have adopted clothes (and acquired clothing lice in the process) and then discarded clothes during warm climate phases, without leaving any genetic trace in modern-day lice.
My work draws on the known thermal physiology of clothes to distinguish two basic forms of clothing: simple and complex. Simple clothing is loose, not fitted, and consists of just a single layer. Examples of simple garments include capes or cloaks draped over the shoulders, and loincloths. Simple clothes can provide a certain amount of insulation in cold weather, although these loose garments can offer only limited protection from wind chill. Simple clothes made from thick furs were probably sufficient when hominins began to occupy northern Europe during colder glacial stages from half a million years ago. Complex clothes are closely fitted around the body and can have cylinders attached to enclose the limbs properly; additionally, they can have up to four or five layers. Complex clothes were a more recent development, and represent a quantum leap in clothing technology, allowing humans to defeat wind chill and survive in the coldest places on Earth.
Once clothes replaced body painting for decoration and display, the need for clothes was uncoupled from climate
Simple and complex clothes differ not only in thermal properties but also in the Palaeolithic technologies involved. Simple clothes required hide-scraping tools, typically the stone implements called scrapers that are found in archaeological deposits stretching back more than 1 million years. Complex clothes required scrapers but also hide-cutting tools, called blades, to cut the hides into regular shapes and make the cylinders for sleeves and leggings. The separate shapes had to be sewn together carefully, hence we start to find more dedicated hide-piercing tools, called awls, later refined into the iconic ice-age clothing tool, the eyed needle. 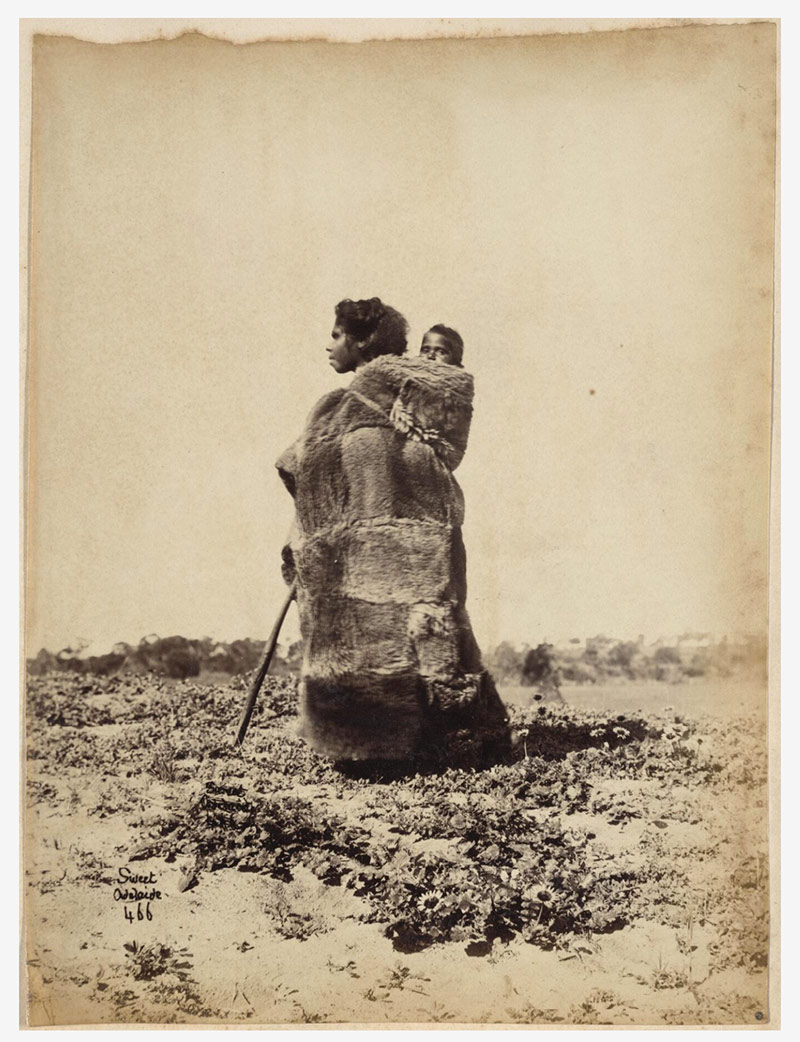