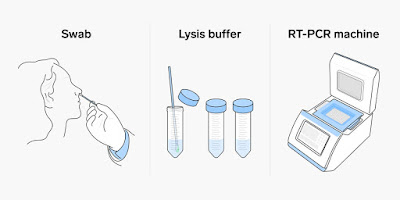 Now we get the low down on those pcr sticks whose use was immediately suspect.  Just where did this come from and why is is necessary to touch the brain membrane to deal with the common cold?
A cogent explanation based on vscience has never been forthcoming.
absence typically means absence in science.
An analysis of test sticks from COVID PCR tests by a hospital in Slovakia confirms genocide PDF
Forwarded on Telegram
https://truth11.com/2021/04/30/an-analysis-of-test-sticks-from-covid-pcr-tests-by-a-hospital-in-slovakia-confirms-genocide-pdf/
Breaking news after medical analysis: PCR tests prove to be a tool for genocide
An analysis of test sticks from COVID PCR tests by a hospital in Slovakia confirms genocide. This is a global, thoughtful and carefully prepared event!
Very disturbing news from Slovakia, where hospital staff in Bratislava conducted an investigation into the PCR tests. They concluded that the cotton swab tests, which are inserted through the nose all the way to the brain, are designed to implant your body with DARPA Hydrogel.
Criminal instrument for genocide
The analysis was carried out in the months of November 2020 to March 2021 on test swabs in sets: SD Biosensor, Abbott and Nadal, in an – for safety reasons – unnamed hospital laboratory in Bratislava, Slovakia. Here is the link to the full, comprehensive study in PDF format. Even a layman like me can understand this.
And anyone who has at least a standard school microscope and a test microscope can verify the information, regarding the test swabs published here. All information about Test Sticks, DARPA Hydrogel, and Lithium is publicly available in scientific and business work. See the links at the bottom of the PDF document and at the bottom of this article.
It is clear from this information that test sticks are a criminal tool for genocide of the people of Slovakia. However, this is a global, thoughtful and carefully prepared event!
Hollow nylon fibers at the end of PCR tests
These broken-formed fiber ends have the task of disrupting the epithelium, the surface layer of your mucous membranes. Due to their breakage at the tip and subsequent leaching and loss of their fiber content – that’s DARPA Hydrogel and Lithium – these substances end up in your body… close to the brain! These hollow fibers or threads are patented by, you guessed it, DARPA.
This image shows a longitudinally opened fiber with broken end, and shows DARPA Hydrogel balls. See also the other images in the PDF for clarification.
This ‘material’ now remains after emptying in the back of your nasal cavity!
After contact of the DARPA Hydrogel with your organic liquids, such as saliva, they start to form rectangular crystal structures within minutes . These grow and multiply. See the result after 24 hours in the PDF!
Main target: your pineal gland
These DARPA Hydrogel ‘crystals’ create a spatial 3D structure and grow right through your body tissue.
DARPA Hydrogel crystals grew under the microscope in the direction of the magnetic field… This means that it grows in the nasal cavity towards the pineal gland. The pineal gland creates a locally stronger magnetic field than the external magnetic field of the earth.
You must realize that natural crystallization of saliva, without DARPA Hydrogel, creates crystals that do not form 3D spatial models or rectangular structures; neither do they grow fractally, so they multiply.
Ivermectin used as a test …
As a kind of test, Ivermectin was added to the unnatural crystallization. This caused an immediate, complete and permanent disappearance of the DARPA Hydrogel crystal structures. Ivermectin thus has an incredibly strong effect against what DARPA Hydrogel produces in our organisms! Ivermectin is an anti-parasitic drug that is effective against most intestinal worms, parasitic mites and lice.
The effect of DARPA Hydrogel on human blood cells
Addition of DARPA Hydrogel from the PCR test stick resulted in, don’t be alarmed, a total slaughter of red blood cells! In addition, DARPA Hydrogel forms blood clots within seconds. These clots damage and then clog the blood vessels!
Resume
After deliberately expanding a mixture of nylon fiber fragments in your nose, DARPA Hydrogel along with Lithium remains on the nasal mucosa, under the pituitary and pineal glands. This mixture immediately reacts with living structures to form crystals that target the pineal gland, which has its own electromagnetic field. After all, man is a bio-electric being. The shape of the crystals says something about the type of hydrogel that was used.
Posted by arclein at 12:00 AM