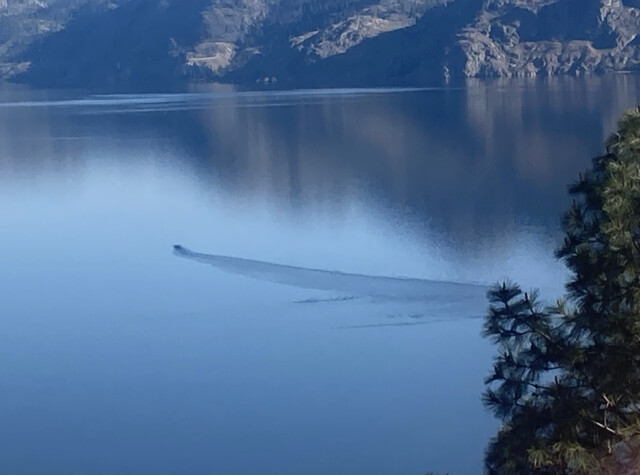 This photo is important.  To make it simple, this is proof of a large agile aquatic animal in the Lake itself.  With a wake like that it is no bear either or Sasquatch.

It could still be a large sturgeon.  Though the head appears too large.

This was perfect conditions for the camera as well.  No fuzzyness for faux controversy.  Again this is confirmation of large aquatic creatures in this lake today.

Eventually we will be able to launch loitering drone coverage in order to develop many such images.

Summerland woman describes 'freaky' sighting of what she believes was Ogopogo

A Summerland woman says it might sound crazy, but she is convinced she saw the legendary Ogopogo this week in Okanagan Lake.

Andrea* was on a hike in the hills above Crescent Beach in Summerland Monday morning when something caught her eye on the calm, deserted lake.

"I was overlooking the lake and I saw something thrashing or something in the water, and I thought 'What the heck?'" Andrea told Castanet.

"It was huge and it was black and it was moving pretty fast, and it had a wake behind it."

Ogopogo is a fabled aquatic creature said to inhabit the depths of Okanagan Lake, dating back to First Nations folklore. While numerous sightings have been reported, no definitive proof of its existence has ever been found.

Andrea thinks she saw it firsthand.

"Whatever I saw, and it was definitely aquatic, whether it was a sturgeon or not, it was huge. It was really big," Andrea said.

"It moved so fast, I knew it wasn't a moose or anything. It submerged itself, then re-emerged, pulling a wake behind it ... it then submerged itself again and disappeared."

She estimates she was about 300 feet above the lake when she saw the animal. She pulled out her phone to grab a photo after staring in disbelief for a minute.

"It was a really beautiful calm day. There was nothing on the way, nobody, no fishing boats. I saw birds dive-bomb this thing as well," she said. "There was something weird going on."

While Andrea can't be certain exactly what she saw, there is one thing for sure: "I definitely will not be jumping off a boat in the middle of the lake this summer, there’s no freakin’ way!"