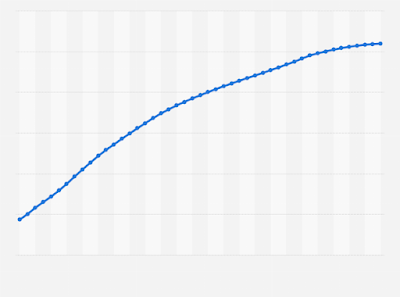 It is difficult to determine just when population decline will set in. Japan has been in decline since 2010, but the decline has so far been minimal.  That predicts that the China population will hang around this level with modest declines.
During the next decade or more, what is happening is that a generation of female fetility is disappearing.  Replacement is also falling behind.
Preventing a broad decline in Japan and China will entail a large family policy been strongly promoted.  This remains completely possible.
China’s Population Virtually Flat at 1.41 Billion
May 10, 2021 by Brian Wang
https://www.nextbigfuture.com/2021/05/chinas-population-virtually-flat-at-1-41-billion.html
China population is 1.41 billion according to the report of its 2020 census. The National Bureau of Statistics reported 12 million births in 2020 which was an 18% drop from the 14.65 million in 2019.
China’s population is almost flat from 2010. There was only a 72 million increase over 10 years from 1.34 billion.
The state-reported figures indicate that China’s population will peak around 2027 if a large part of the 2020 decline in birth was temporary and due to COVID.
China’s reported fertility rate is 1.3 while the USA has a fertility rate of 1.64. Both are well below the replacement rate of 2.1.
China has more people over the age of 60 (264 million) than 14 and younger (253 million).
There were 902 million people living in urban areas (64%). 510 million live in rural areas.
Posted by arclein at 12:00 AM