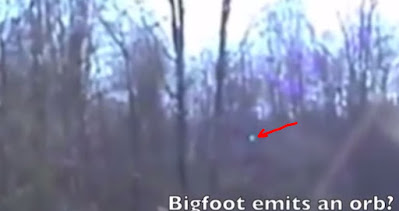 This is important.  We have had multiple reports of orbs in association with ufos. But also in association with sasquatch sightings.  Yet nothing that could be claimed as definitive.  That has just changed.  an observer walked up on a kneeling Sasquatch from behind and discovered him in obvious communion with an orb. when he reacted, the orb stayed with him.

If the orb is a communication tool then this observation is effective proof that our sasquatch population is been perhaps even supplied.

so far, we have little evidence that the orb shows up with other cryptids.  Yet the use of the Little Red riding illusion by Dogman suggests something in the form of enhancement.  I have presumed such enhancement was a natural augmentation of inate skills that we have set aside around 45,000 years past.  might is all be artificial including the ability to avoid been seen?

I have avoided going there as it demands active alien involvemnt when it is difficult enough to make the case for creature existence.  Now it is jumping out at us.