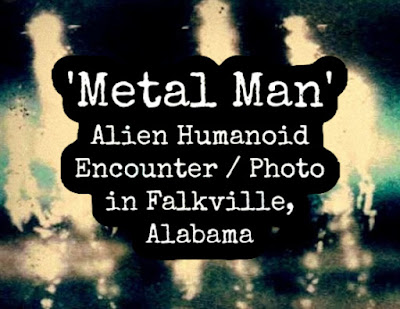 This happened a long time ago when UFO phnom was under plenty of dirision.  However, his reaction conforms completely to trained police behavior.  It is not conforming at all to a fabrication event.  He essentially wrecked his patrol vehicle in his atrtempted pursuit.
This is also a rare poloroid picture as well.  At least it confirms we are looking at a metalized surface reacting to body movement.
The impossible speed is also completely confirmed by the attempted pursuit.  All this is good enough and we can set aside human agency right here.  It joins scores of similar anomolous tales.
'Metal Man' Alien Humanoid Encounter / Photo in Falkville, Alabama
Monday, May 10, 2021
https://www.phantomsandmonsters.com/2021/05/metal-man-alien-humanoid-encounter.html?
The year was 1973. I was getting ready to start my sophomore year in high school. It was a tumultuous and cynical time filled with news of Watergate, the Vietnam War and many other historical events. People were sick of reading about crooked politicians and continued war. UFO sightings were on the increase culminating in abductions and extraordinary sightings - and I was riding the wave. Unparalleled UFO encounters and alien visitation’s occurred worldwide during the most extraordinary "UFO Flap." The number of UFO reports was unprecedented during this banner year. 1973 brought us the Pascagoula Incident and the Charlie Hickson and Coyne cases. But the one event that grabbed my attention the most was the 'Falkville Metal Man' case.

On the Autumn evening of October 17, 1973, Jeff Greenhaw, then 26-year old Chief of Police of Falkville, Alabama, was settling in with his wife for a well deserved night of rest when he received an emergency call around 10 PM that would literally change his life forever.
The call was from an hysterical anonymous woman who claimed that a UFO had landed just outside of town in a field which was owned by Bobby Summerford.
Although he was off duty, Greenhaw...abiding by his sworn duty to serve and protect...jumped up, grabbed his keys, cuffs, revolver and his Polaroid camera, on the off chance that there might be something worth taking a shot of. He then hopped into his truck, radioed the call in and raced to the location of the alleged flying saucer landing.
When Greenhaw arrived on the scene he got out of his truck and patrolled the area, but claimed to find nothing out of the ordinary. The chief then returned to his vehicle and decided to take drive around the field before returning home. Greenhaw cruised around the perimeter of Summerford’s property, scanning the darkness for anything unusual, but saw nothing of interest in the murky blackness. He then turned down a narrow, gravel path for one final pass...that was when he came face to face with an unknown entity.
After traveling down the path for about a hundred yards, Greenhaw saw an being that he described as a humanoid figure standing next to the road, about 75-feet away. The chief got out of his truck and carefully approached what he still assumed to be a human being, thinking that it may be someone in need of assistance. 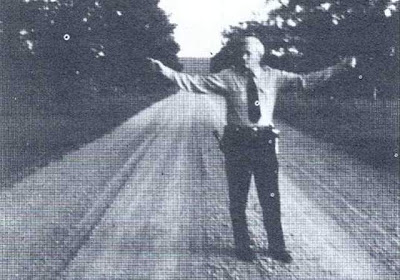 Police Chief Jeffrey Greenhaw shows the area of his encounter
Greenhaw shouted to his strange companion, but it did not respond. As he got to within 15-feet of the being that was illuminated in his truck’s high-beams, the chief realized that something was very wrong. The entity appeared to be wearing some kind of silvery, metallic suit that resembled thick aluminum foil.
Some reports also indicate that its stature was somewhat child-like or simian, like a monkey in a spacesuit. Greenhaw described what he saw:
“It looked like his head and neck were kind of made together… he was real bright, something like rubbing mercury on nickel, but just as smooth as glass-different angles give different lighting… when I saw him standing in the middle of the road I immediately stopped the car and asked if he was a foreigner, but no sound came out of his mouth.”
Greenhaw also noted that the thing had an antenna sticking out from the top of its head and that its movements were jerky and mechanical.
The shocked Greenhaw realized that he was dealing with something unknown and, pushing his panic aside with years of police training, had the presence of mind to pick up his instant camera and shoot four photographs.
The first Polaroid shows nothing but inky darkness and a flash of silver, but the next three images hit paydirt. In the photos one can clearly see a human-like figure wearing a wrinkly, metallic suit, which is reflecting the Polaroid’s flash.

Perhaps believing that it was being attacked by a human with some kind of “light-beam” weapon, the creature almost instantaneously turned and began sprinting across the field at speeds far in excess of those capable by human. Greenhaw noted that it seemed to be heading in the general direction of Lacon, which is about three miles away from Falkville. The chief reacted swiftly, ran back to his truck and took off in pursuit of the 'tin foil man.'
Greenhaw would state that he managed to accelerate his truck only to about 35 MPH due to the rough terrain of the field, but that he was still completely outrun by this unusual entity, which defied the laws of gravity with it’s speed and and spring-like jumps. According to Greenhaw:
“It ran in a bizarre way...seemed to have springs in the feet for propulsion, could cover about three meters in every way. He was running faster than any human I ever saw.”
During this frantic off road pursuit, Greenhaw claims he lost control of his truck and slid into a ditch. At which point he watched as the creature slipped into the darkness never to be seen again. Leaving Greenhaw with only his haunting memories of the event and a single controversial Polaroid.
Greenhaw’s experience was instantly met with skeptical derision, if not outright ridicule.
Within months of revealing his bizarre encounter, the Chief of Police was terminated by the town council, his marriage fell apart and, just when it must have seemed as if matters couldn’t get any worse, his home was burned to the ground. All of the above factors have thrown kerosene on the already brightly burning flames of the UFO conspiracy theories surrounding this event and gives a clear indication as to why most contactees and eyewitnesses remain silent regarding their unusual experiences.
Some ufologists believe that the tin foil man was a robotic scout for an extra-terrestrial landing craft, while skeptics maintain that it was all a hoax perpetrated by Greenhaw and an unknown accomplice who was clad in a tin foil costume. 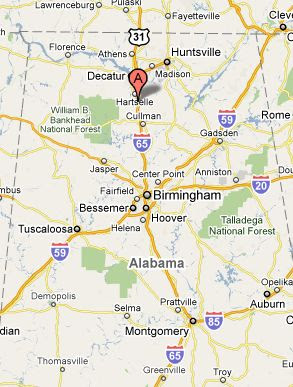 Falkville, Alabama
The images that Greenhaw snapped were collected and sent for analysis by Walt Andrus, a director of MUFON.
The conclusion drawn by the analysts was that the encounter was most likely a fabrication...probably inspired by all the furor surrounding the recent Pascagoula case. If was presumed that aluminum foil or an asbestos fire suit was used to create the unusual look of the creature.
Interestingly the negatives of the Greenhaw pictures that were studied by MUFON seem to show images of a “flying saucer” amongst them, although no one ever claimed to have photographed the object initially reported.
Chief Greenhaw garnered no financial gain or positive notoriety due to his experience and, while he has managed to rebuild some semblance of a normal life, all reports indicate that he continues to regret his encounter with this unknown. To this day, however, Greenhaw and his supporters insist that he had an actual encounter with an alien being.
Sources:
ufos.about.com
ufocasebook.com
nicap.org
theironskeptic.com
americanmonsters.com
martiansgohome.com
paranormalinvestigationtools.com
Posted by arclein at 12:00 AM