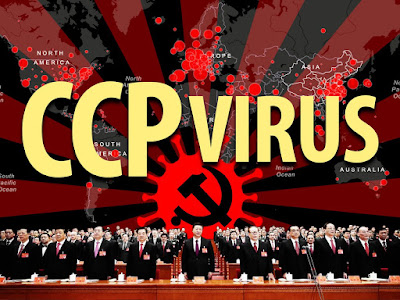 As usual those in the middle of such scheming cannot keep their mouths shut and must brag to show how clever they are.  understand that this type of recklessness has been anticipated and actually countered by your opponent.
We knew from the get go what was up and counters have been in place.  Think about that.  It is literally the only reason that I remain ultimately unconcerned.  We have been reading their mail forever.
This has actually made all forms of warfare obsolete.  The CCP is now getting that message.  Meanwhile we read more and more about the Rods of God.
Senior Member of CCP Think Tank Claims China Won Unprecedented Biological War Against the US in 2020
A senior member of a Chinese Communist Party think tank claims that China not only won a biological war against the United States in 2020, but also "put the US back in its place".
Chen Ping, Senior Researcher at Fudan University and professor at Peking University, proudly admits on video here that the CCP won the trade war, science and technology war, and especially the biological war in 2020.
"The achievement is unprecedented. This is an epoch-making historical record," he says. "So for the liberal, America-worshiping cult within China, their worship of the US is actually unfounded. After this trade war and biological warfare, the US was beaten back to its original form."
“So I think Trump’s attempt to restore the declining international status of the US during his 4 years has failed. This failure is not only the failure of Trump’s personal campaign for re-election as president, but also the failure of the neo-liberalism-led globalization of the past four decades led by the US and the UK. Therefore, the development and modernization model of the US and Europe is not worthy of China’s imitation and repetition,” Peng added.
The video's authenticity and translation was confirmed by New York-based Chinese blogger, Jennifer Zeng.
Zeng explains, "His main argument is that the Western model has failed, the 500-year maritime civilization is doomed, the CCP has won and 'will lead the way of the modernization in the new era after the biology revolution,' after the 2020 CCPVirus (COVID19) pandemic."
Posted by arclein at 12:00 AM