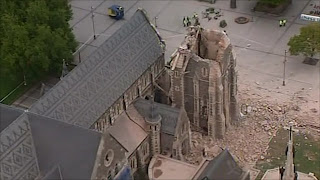 This quake is an aftershock from the major quake that occurred last year.  The only problem is that it is located directly under driving the maximum damage.  It also warns of possible additional aftershocks though I suspect that the originating fault is now completely released in both directions.

Early casualties are at 67 are of course far too low and will surely be in the hundreds.  The good news is that the civil defense organization here is fully prepared to cope and though the damage is massive it is not beyond available resources as hurricane Katrina clearly was in 2005.

Obviously city center is massively damaged and has been ordered evacuated.  The photos here show all that.  That it happened during lunchtime put a lot of people in the center and made a lot vulnerable.  It also placed ample manpower in place for immediate rescue work which facilitates getting the injured out of harms way.  There is no good time for an earth quake but this could have been both much better and much worse. 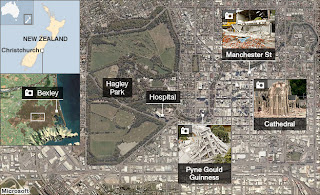 Many parts of were left in ruins after the quake

The disaster struck at a shallow depth of 5km (3.1 miles) on Tuesday lunchtime when was at its busiest.

It is the city's second tremor in six months, and the country's worst natural disaster in 80 years.

The mayor has declared a state of emergency and ordered the city centre's evacuation.

On a cold and wet night, emergency teams have been toiling under floodlights to reach survivors, as relatives keep vigil outside.

Rescue teams with sniffer dogs have been fanning out across .

A series of aftershocks, some as big as magnitude 5, have rattled the stricken city of nearly 400,000 people.

Many power and telephone lines are knocked out, while burst water mains have deluged whole districts.

Up to 30 people were feared trapped inside the flattened Pyne Gould Guinness building, where screams have been heard from the ruins.

Trapped under her office desk, Anne Voss told a TV station: "I rang my kids to say goodbye. It was absolutely horrible.

"My daughter was crying and I was crying because I honestly thought that was it. You know, you want to tell them you love them, don't you?"

She said she could hear other people alive in the building, and had called out to them.

The city's cathedral lost its spire, while a six-storey TV building housing an English-language school was reduced to a smoking ruin.

A dozen Japanese students at the school have been reported missing.

Emergency shelters have been set up at the city's , a race course, schools and community halls.

The Red Cross has been trying to find accommodation for people sheltering outside in tents or under plastic sheeting.

New Zealand Prime Minister John Key, who held an emergency cabinet meeting before heading to the disaster zone, said: "We paid a very heavy price here. We could be looking down the barrel at 's darkest day."

The military has been deployed to help the rescue effort, and the government has accepted an offer of specialist help from .

In the aftermath of the disaster, shocked survivors wandered streets strewn with debris, including shattered glass, broken computers and desks.

Roads split and cracked open as the ground beneath was liquefied by the quake.

Helicopters plucked survivors to safety from rooftops, and dumped water on fires.

And Tuesday's tremor in is almost certainly related to the much more energetic event that hit the region last September.

The critical difference on this occasion is the ground broke almost directly under the country's second city, and at shallow depth, 5km (3 miles) below the surface.

Contrast this with September's magnitude 7 quake: its epicentre occurred some 40km west of the city and at a depth of 10km, and it continued to rupture mainly away from the major built-up areas.

New Zealand lies on the notorious Ring of Fire, the line of frequent quakes and volcanic eruptions that circles virtually the entire .

The country straddles the boundary between two tectonic plates: the Pacific and Indo-Australian plates.

On , the location of the latest quake, the plates rub past each other horizontally.

Many injured people were carried out on blood-soaked stretchers or in the arms of shocked workmates and strangers.

Some escaped on ropes lowered from office towers. Others managed to crawl out of the rubble.

One resident, Jaydn Katene, told the Herald: "We've had friends in town call us and say there are lots of dead bodies outside shops just lying there just covered in bricks."

Police said that the dead included people on two buses which were crushed by falling buildings.

John Gurr, a camera technician, told Reuters news agency the area was "like a war zone".

The quake caused some 30m tons of ice to shear away from 's biggest glacier.

Britain's Queen Elizabeth II, who is also New Zealand's head of state, said in a statement she had been "utterly shocked" by the news.

"My thoughts are with all those who have been affected by this dreadful event," the statement said.

The damage is thought to be far worse than after the 7.1-magnitude quake on 4 September, which left two people seriously injured but no fatalities.

The epicentre of that quake, which occurred in the middle of the night, was further away from the city and deeper underground.

New Zealand experiences more than 14,000 earthquakes a year, of which only around 20 have a magnitude in excess of 5.0.

The last fatal earthquake was in 1968, when a 7.1-magnitude tremor killed three people on the 's western coast.

Tuesday's was the country's worst natural disaster since a 1931 quake in the Hawke's Bay on the which killed 256 people.

LONDON — Britain has dispatched a search and rescue mission to New Zealand, Prime Minister David Cameron said on Tuesday, to help find survivors of a powerful earthquake that has killed at least 65 people in the second city of .

Voicing his "deepest sympathies and condolences" to New Zealand, Cameron said the UK "stood ready" to provide further help at this "dark and difficult time".

"There are many people in with ties of friendship or family to ," said Cameron, speaking to British journalists travelling with him in .

"I have been in touch with my good friend, prime minister John Key, and he knows that stands ready to provide whatever assistance is required in support of the local emergency services.

"The people of have been hit by a devastating earthquake, not once, but twice in a matter of months, and I want to pay tribute to their resilience."

A 7.0-magnitude quake hit six months ago but miraculously claimed no victims.

Cameron said Britain's high commissioner in New Zealand was on her way to Christchurch, along with extra consular staff.

Queen Elizabeth II, who is also New Zealand's head of state, said earlier on Tuesday that she was "utterly shocked" by the news of the 6.3-magnitude quake, which struck city streets at midday, crushing buildings and cars and leaving hundreds trapped.

"I have been utterly shocked by the news of another earthquake in ," she wrote in a message to Key.

"My thoughts are also with the emergency services and everyone who is assisting in the rescue efforts."

Key said could be witnessing its "darkest day" after the quake, which was the country's deadliest tremor in 80 years.

The Foreign Office told AFP it had not received news of any British casualties. Around 288,100 British nationals visit each year, according to Statistics .

The High Commission in said New Zealanders in who were worried about friends and family should monitor government websites and media reports and to try to make direct contact with loved ones.
Posted by arclein at 12:01 AM