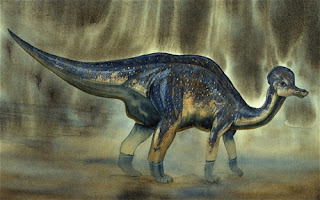 I would go a lot further that this.  I suspect that a population of dinosaurs lived into the Ice Age in the Australian New Guinea Sub continent called the Sahul.  This was a mostly vast rain forest in the Northern reaches and likely around fifteen degrees further south if we accept the Pleistocene Nonconformity as ending the Ice Age.

The fauna is largely unlike the old world fauna and it is reasonable that a number of dinosaur species could well have held out here.  Besides, this a complexly opposite the which we recognize as the impact zone for the KT event.  It should have been the least affected place on Earth and only came under serious pressure with the advent of the sudden collapse of the Ice Age which inundated the rain forest in particular.

We have also learned that a sub group of dinosaurs were adapted to swamplands and had excellent chances of surviving anything as did the crocodiles and many other reptiles there.  I suspect that our most famous reptile known as Tyrannosaurus Rex was aquatic and hunted crocs.  Certainly we have evidence of such a remnant population in the remnants of the Sahul that is surely aquatic. (google this blog for Burrunjor)

Thus it comes as no surprise that survivors made it through even in the old world mostly depending on their ability to retreat to swamps.  and forest would have been covered with ash and dust throughout the Northern Hemisphere at least and geology suggests that just about everywhere had a ash problem.

Thus outside of swamps, survival was scant.  Afterward the tide against the dinosaurs became overwhelming in the old world also in the Sahul.

What ended was the use of large eggs as a method of raising the next generation. Two separate strategies evolved but those reptiles dependent on protecting large eggs died out.  It obviously remains in use for birds but attempts by large birds to survive have generally been too difficult.  We like to blame humanity for these extinctions but any aggressive mammal can do it as rats on many islands have shown.

In the event the dinosaurs survived but massively decimated in numbers from which it appears that they never recovered.

Dinosaurs survived for at least 700,000 years after meteorite collision

Dinosaurs survived for more than 700,000 years after the earth was hit by a massive meteorite originally believed to have caused their extinction, according to new research.

Many palaeontologists believe that all non-avian dinosaurs disappeared almost 66 million years ago - after debris from the meteorite blocked out the sun and caused extreme climate conditions, killing vegetation worldwide.

But new tests on a fossilised bone of a plant eating dinosaur discovered in found that it was only 64.8 million years old - meaning that it was alive about 700,000 years after it was thought to have died.

A team at the of , , used a new "direct-dating" method called U-Pb (uranium lead) dating to establish the age of a hadrosaur's thigh bone much more accurately.

A laser beam removes minute particles of the fossil, which then undergo radioactive dating - which allows the age of the fossil bone to be determined and can even tell what type of food the dinosaur ate.

Living bone contains very low levels of uranium, but during fossilisation (typically less than 1000 years after death), this level increases.

The uranium atoms in bone decay spontaneously to lead over time and, once fossilisation is complete, the uranium-lead "clock" starts ticking.

By measuring the radioactive decay it is possible to establish accurately the age of the hadrosaur, a giant plant eating dinosaur with a platypus-like bill.

Currently, palaeontologists date dinosaur fossils using a technique called 'relative chronology' which means establishing the age of sedimentary rocks above and below the layer in which the fossil is found.

But a potential weakness for this approach is that over millions of years geologic and environmental forces may cause erosion of the fossil-bearing layer causing it to move from its original position in relation to other rock layers.

Led by Larry Heaman from the Department of Earth and Atmospheric Sciences, the team say there could be several reasons why the New Mexico hadrosaur came from a line of dinosaurs that survived the great mass extinction of the late Cretaceous period (KT extinction period).

Dr. Heaman said it is possible that in some areas the vegetation wasn't wiped out and a number of hadrosaur species survived.

The researchers added that the potential survival of dinosaur eggs during extreme climatic conditions also needed to be explored.

They believe if their new uranium-lead dating technique bears out on more fossil samples then the KT extinction paradigm and the end of the dinosaurs will have to be revised.
Posted by arclein at 12:01 AM