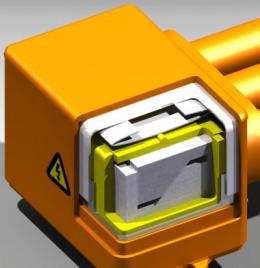 Some friends of mine actually built out an electrical vehicle some years back and in the process gained a lot of knowhow.  One tidbit was that the cable harness made from copper grabbed sixty pounds of weight right away.  Thus an EV does need to shed as much copper as possible.  Aluminum is an obvious alternative.  It is also likely to be easy to make safe in an automobile which was its problem in house wiring in which long term creep caused increasing resistance and failure.

I suspect that EVs will use aluminum extensively for the heavy duty current load once the manufacturers get used to doing so.

I also suspect that good design will minimize even that quite easily.

Aluminum to replace copper as a conductor in on-board power systems
February 7, 2011

This CAD drawing shows an innovative electrical connector based on aluminum conductors instead of copper. It's part of a project to remove obstacles to using this lighter, less expensive material in electric cars and other vehicles. Credit: Copyright TU Muenchen

Electric power and electronics are playing an ever-increasing role in all kinds of vehicles. Currently copper is the conductive material of choice. But in comparison to aluminum copper is heavy and expensive. In particular for fully electric vehicles the switch to the cheaper and lighter aluminum would be an interesting option. That is why the optimization of intricate power supply networks is now in the focus of engineering research. Scientists from the Technische Universitaet Muenchen (TUM, ), in collaboration with BMW engineers, have now found out what tricks make it possible to replace copper with aluminum.

At first glance it is not at all clear why copper is still used as conductor in modern electric or semi-electric vehicles – when aluminum is lighter and significantly less costly. However, before aluminum can replace copper inpower supply systems, a number of technological challenges need to be surmounted. When temperatures are high – and there are many places in a car where that is the case – aluminum displays a distinct creep behavior. Conventional connectors could thus not be used, as they would become loose with time.

One possible alternative – the use of aluminum-based elements in cables and copper-based elements in connection areas – also entails problems. Because there is a high electrochemical potential between a copper contact and an aluminum cable, this kind of wiring would be very prone to corrosion. Besides, joining copper to aluminum is rather demanding with the current state of technology. In order to counteract the aforementioned difficulties, scientists of the chairs for High Voltage Technology and Power Transmission and for Metal Casting and Forming, in cooperation with the respective departments of the BMW Group, developed an innovative aluminum-based electrical connection concept in the project LEIKO.

A sheet metal cage, which is an electromagnetic compatibility requirement anyway, enhances the mechanical stability of the plug and guarantees the long-term support of the contact pressure spring. Because the necessary contact force is no longer provided by the contact elements themselves, the originally problematic creep behavior of aluminum turns into a contact stabilizing, and thus, positive property. This, in turn, also guarantees a constant contact force over a lifetime of ten years.

To this end the researchers came up with a special wedge-shaped geometry for the aluminum contacts. The aluminum creep now leads to the two contacts snuggling closer and closer together over time, thereby rendering the electrical connection better yet. Moreover, the consistent use of aluminum alloys and the ingenious application of precious metal plating made it possible to relocate the formation of corrosion-prone local elements to less critical locations in the system.

A further problem with substituting aluminum for copper is its lower electrical conductivity. In the case of high-power on-board systems in particular, the cable cross-sections, which are about 60 per cent larger, need to be taken into account in the construction of cable ducts and feed-throughs. One positive thing the scientists discovered was that because aluminum is very pliable, the standard values from copper cable processing, where bending radii are set based on the diameter, could also be used for aluminum.

In order to determine the long-term behavior of the coated aluminum contacts under even the rough conditions typical for motorized vehicles, the project partners, together with leading suppliers, have successfully initiated a further research project. Funded by the Bavarian Research Foundation (BFS), this project will deliver evidence on the aging behavior and thus the suitability of the concept by 2012.

Initial results indicate that the material substitution will lead to significant improvements in weight, cost, and ultimately emissions. "We expect the high-voltage on-board systems of most electric vehicles to be based on aluminum by 2020. Aluminum will find its way into low-voltage on-board systems as well, because the price of copper will rise significantly with increasing demand," says Professor Udo Lindemann from the Institute of Product Development at the TU Muenchen.

The project finds its theoretical counterpart in the (SFB) 768, Managing Cycles in Innovation Processes, funded by the German Research Foundation (DFG). It aims to bundle competencies from computer science, engineering, economics, and the social sciences in order to look into challenges at the interfaces of innovation processes along with partners from industry. The goal of this research is to use an interdisciplinary perspective to develop industry-relevant solutions in dealing with dynamic changes in company environments, as well as in company internal process landscapes.

Another aspect of the research conducted within SFB 768 is a student project to develop an electrically driven go-cart. In order to experience the manifold challenges of innovation management first-hand, the students started with a standard base structure and went through the entire development process for all subsystems of the vehicle. The results of the LEIKO project are also integrated into the student project – the entire high-voltage on-board system is implemented in aluminum.
The results are to be incorporated in the TUM electro vehicle MUTE, which will be presented at the IAA 2011.