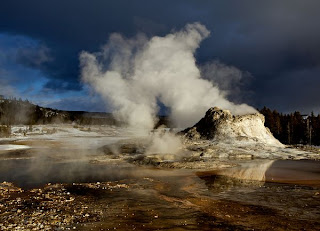 I posted on the bulging at last year and we now have this item from the National Geographic.  One finds that the process is largely benign and likely to remain so.  Certainly there is no mountain building going on.

The sheer of the super volcano is staggering and well worth celebrating.  Of course, I would love to see it all tapped for geothermal energy, even if that meant burying the facilities.  The yield would be high and the capacity would be huge.  However the designation of national park sharply curtails such efforts although it actually should not.

Our problem is that there is a belief that all development requires an unlimited surface right which is not true and also bone stupid.  The oil industry today comes, extracts and cleans up and leaves a land that is swiftly reclaimed by nature.

Geothermal works on a closed circuit basis and placing the surface component underground or part of a general park facility is not difficult.  Everything else (particularly power lines) can be buried and should be anyway.

Has Bulged as Magma Pocket Swells

The simmering volcano has produced major eruptions—each a thousand times more powerful than 's 1980 eruption—three times in the past 2.1 million years. Yellowstone's caldera, which covers a 25- by 37-mile (40- by 60-kilometer) swath of Wyoming, is an ancient crater formed after the last big blast, some 640,000 years ago.
(See "When Yellowstone Explodes" in National Geographic magazine.)

Since then, about 30 smaller eruptions—including one as recent as 70,000 years ago—have filled the caldera with lava and ash, producing the relatively flat landscape we see today.

But beginning in 2004, scientists saw the ground above the caldera rise upward at rates as high as 2.8 inches (7 centimeters) a year. (Related: "Yellowstone Is Rising on Swollen 'Supervolcano.'")

The rate slowed between 2007 and 2010 to a centimeter a year or less. Still, since the start of the swelling, ground levels over the volcano have been raised by as much as 10 inches (25 centimeters) in places.

"It's an extraordinary uplift, because it covers such a large area and the rates are so high," said the of 's Bob Smith, a longtime expert in 's volcanism.

"At the beginning we were concerned it could be leading up to an eruption," said Smith, who co-authored a paper on the surge published in the December 3, 2010, edition of Geophysical Research Letters.

"But once we saw [the magma] was at a depth of ten kilometers, we weren't so concerned. If it had been at depths of two or three kilometers [one or two miles], we'd have been a lot more concerned."

Studies of the surge, he added, may offer valuable clues about what's going on in the volcano's subterranean plumbing, which may eventually help scientists predict when 's next volcanic "burp" will break out.

Ground deformation can suggest that magma is moving toward the surface before an eruption: The flanks of , for example, swelled dramatically in the months before its 1980 explosion. (See pictures of Mount St. Helens before and after the blast.)

But there are also many examples, including the supervolcano, where it appears the ground has risen and fallen for thousands of years without an eruption.
According to current theory, 's magma reservoir is fed by a plume of hot rock surging upward from Earth's mantle. (Related: "New Magma Layer Found Deep in Earth's Mantle?")

When the amount of magma flowing into the chamber increases, the reservoir swells like a lung and the surface above expands upward. Models suggest that during the recent uplift, the reservoir was filling with 0.02 cubic miles (0.1 cubic kilometer) of magma a year.

When the rate of increase slows, the theory goes, the magma likely moves off horizontally to solidify and cool, allowing the surface to settle back down.

Based on geologic evidence, Yellowstone has probably seen a continuous cycle of inflation and deflation over the past 15,000 years, and the cycle will likely continue, Smith said.

Surveys show, for example, that the caldera rose some 7 inches (18 centimeters) between 1976 and 1984 before dropping back about 5.5 inches (14 centimeters) over the next decade.

"These calderas tend to go up and down, up and down," he said. "But every once in a while they burp, creating hydrothermal explosions, earthquakes, or—ultimately—they can produce volcanic eruptions."

Predicting when an eruption might occur is extremely difficult, in part because the fine details of what's going on under are still undetermined. What's more, continuous records of 's activity have been made only since the 1970s—a tiny slice of geologic time—making it hard to draw conclusions.

"Clearly some deep source of magma feeds Yellowstone, and since Yellowstone has erupted in the recent geological past, we know that there is magma at shallower depths too," said Dan Dzurisin, a Yellowstone expert with the USGS Cascades Volcano Observatory in .

"There has to be magma in the crust, or we wouldn't have all the hydrothermal activity that we have," Dzurisin added. "There is so much heat coming out of Yellowstone right now that if it wasn't being reheated by magma, the whole system would have gone stone cold since the time of the last eruption 70,000 years ago."

The large hydrothermal system just below Yellowstone's surface, which produces many of the park's top tourist attractions, may also play a role in ground swelling, Dzurisin said, though no one is sure to what extent.

"Could it be that some uplift is caused not by new magma coming in but by the hydrothermal system sealing itself up and pressurizing?" he asked. "And then it subsides when it springs a leak and depressurizes? These details are difficult."

And it's not a matter of simply watching the ground rise and fall. Different areas may move in different directions and be interconnected in unknown ways, reflecting the as yet unmapped network of volcanic and hydrothermal plumbing.

The roughly 3,000 earthquakes in each year may offer even more clues about the relationship between ground uplift and the magma chamber.

This earthquake "swarm" may have helped to release pressure on the magma reservoir by allowing fluids to escape, and this may have slowed the rate of uplift, the 's Smith said. (Related: "Mysterious 'Swarm' of Quakes Strikes Oregon Waters.")

"Big quakes [can have] a relationship to uplift and deformations caused by the intrusion of magma," he said. "How those intrusions stress the adjacent faults, or how the faults might transmit stress to the magma system, is a really important new area of study."

Overall, USGS's Dzurisin added, "the story of deformation has gotten more complex as we've had better and better technologies to study it."