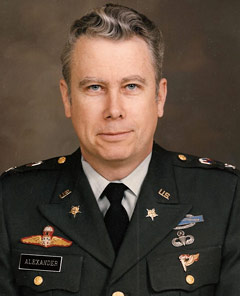 This a pretty important item as it comes from a man who had both rank and the enthusiasm to pursue his own investigation into the possibility of the US military actually operating a secret UFO program.  He comes to the correct conclusion that they at most take notes from time to time and do not have anything organized.  The fact is that in sixty years, the problem of overlap and exchange of personnel would produce an impossible security situation.

Such an initiative would need to be a complete cutout with authority to collect data as it came in.  The evidence in place suggests just that was set up.  Reports such as men in black stories could plausibly be part of such a cut out.   In practice, all reports with a military aspect follow exactly that path in which the military witness observes the data disappear into a cloud of misdirection.  No one cares if he eventually blabs years later.

The take home is that any such program is not been handled by the military at all and never was.  Thus no cover up but plenty of indicative evidence.

That such a program needs to exist is more apparent today than at any time in the past.  The sheer scale and range of the apparent phenomenon is remarkable but also plausible in terms of the application of Magnetic Field Exclusion Vessel (MFEV) technology that I have written about on Viewzone and posted on here.  At least with my article we can now understand the technology we are looking at and with the flood of nanoscale breakthroughs in physics, we even glimpse how to get there.

One other take home that my readers need to appreciate.  We will have all the physical information we need inside the next thirty years because it is advancing just that fast.  This coincides with us achieving a universal middle class economy worldwide.

Whether you believe or disbelieve the notion that UFOs are visitors from another planet, a former highly decorated military officer now comes forward with information that may infuriate those on both sides in the ongoing ET debate.


Retired Col. John Alexander, using his military savvy and high security clearance, spent a quarter of a century going through the top levels of the U.S. government and military searching for the group of people who were allegedly responsible for UFO information and the supposedly decades-old UFO cover-up.


His conclusions: Not only is there no such group and no cover-up, but disclosure about UFOs has already occurred on different official levels.

With so many people crying out these days for the U.S. government or the United Nations or even the Vatican to issue some sort of "we are not alone in the universe" disclosure statement, Alexander says the information has been dripping out all around us, over decades, with top officials casually making statements about UFOs.

He references this 1950 remark made by President Harry Truman: "I can assure you the flying saucers, given that they exist, are not constructed by any power on Earth."

"Disclosure has happened," Alexander added. "It starts with former presidents Truman, Carter, Reagan and [the 's] Gorbachev. I've got stacks of generals, including Soviet generals, who've come out and said UFOs are real. My point is, how many times do senior officials need to come forward and say this is real?" Alexander told AOL News.

Several months ago, a group of ex-military officers came forward to discuss their experiences when UFOs reportedly tampered with American nuclear missile sites. While Alexander acknowledges the events, he suggests why there was no intense intelligence investigation of these incidents.

"They absolutely happened, but when it's a one-time event, the attitude of investigators is: If it happens again, we'll get nervous, but since it didn't happen, put it aside.

"It's sort of an indictment that says, despite overwhelming evidence of interaction with strategic systems, nothing was done. And in my view, it is put, like a number of things, in the too-tough-to-handle bin."

The 74-year-old former Green Beret A-Team commander and developer of weapons at , , is one of many speakers presenting his views at this week's International UFO Congress in He takes issue with both true believers (who assume any strange light in the sky is from another planet) and hard-nosed skeptics (who debunk any and all UFO reports and evidence to the contrary).

In his new book, "UFOs: Myths, Conspiracies and Realities" (Thomas Dunne Books), Alexander jumps right to the chase, saying, "UFOs are real! With no prevarication or qualification of terms, there are physical objects of unknown origin that do transit our universe. The evidence that supports those statements is simply overwhelming."

The evidence he speaks of includes the hard data of sensor technology that has frequently confirmed the reality of physical craft and the high quality of extremely reliable eyewitnesses who are "neither misreporting facts nor delusional."

After spending decades deeply embroiled behind the scenes, Alexander's assertion of the reality of UFOs still leaves the bigger question: What's the origin and purpose of these unexplained machines? (If, in fact, they are machines in the sense that we use that term.)

"The problem is, when you discuss UFOs, we are talking everything from little balls of light to hard craft a mile or more across, and everything in between. So what is it?" Alexander asked.

"I argue that, not only are we not solving the problems yet, we're not even asking the right questions, because we approach this wrong.

"I suspect that consciousness is a piece of the puzzle. We talk about UFOs, saying it's a technology that's 1,000 years in advance, but it really isn't. If you follow the history of these things, usually it is somewhat in advance, but not beyond our comprehension by any stretch of the imagination.

Alexander is a frequent guest on "Coast to Coast AM With George Noory," the popular overnight radio program. George Knapp, a multiple Emmy Award-winning investigative reporter and a weekend "Coast to Coast" host, praises Alexander's stance and suggests his book "will almost certainly infuriate zealots on both ends of the UFO spectrum."

In his review of Alexander's book, Knapp wrote: "Alexander's military mind instinctively gets to the heart of UFO cases and issues, makes quick work of charlatans and fools, and will likely inspire a new round of speculation about his presumed role as an MIB-type spook who spies on the UFO community."

In the early 1980s, Alexander created a behind-the-scenes government UFO study group called Advanced Theoretical Physics, or ATP, that consisted of members of the military, scientific and intelligence communities. With a top-secret security clearance, Alexander also had a tremendous amount of flexibility.

A key outcome of that study group was, contrary to conspiracy theorists' beliefs, that nobody in the government was responsible for UFO information.

He says that after his ATP group looked at many UFO cases, they came to some key conclusions:

There was sufficient evidence supported by high-quality data to know that some UFO cases were real anomalies -- not just poor observation or misidentification.

There were cases involving military weapon systems that posed a significant threat and should be investigated.

Multisensory data supported observations of physical craft that performed intelligent maneuvers that were far beyond any known human capability.

There were cases that involved trace physical evidence.

Study of the UFO data could provide a potential for a leap in technology.

All that being said, Alexander also states that the infamous , UFO case of 1947 was not, in fact, a crashed alien spacecraft but a top-secret military project called Mogul.

"It was a real incident, no doubt about it. The Air Force played it abysmally, but I think there is a prosaic answer, and that was Project Mogul," Alexander explained. "It wasn't a weather balloon -- it was something really quite different. This was designed to listen to the .

"So when they say it was stretched out across the field, yup, exactly the way it was done. It was supersecret and it didn't involve UFOs."

After many years of deep research into UFOs, Alexander is convinced from both a personal and military point of view that it's a much more complex issue than the idea of Earth being visited by extraterrestrials. He proposes a concept called precognitive sentient phenomena.

"The point is there is something out there that is sentient. When I say precognitive, it knows -- whatever it is -- not only what it is going to present, but how we are going to respond to it.

"The public is interested but ambivalent in general. The public believes in UFOs, but it doesn't affect their daily lives," Alexander explained. "In the military, you learn very quickly it is not career-enhancing to bring up anomalies that you don't have good answers for.

"There's a euphemism in the military: If you bring me a problem, bring me a solution."