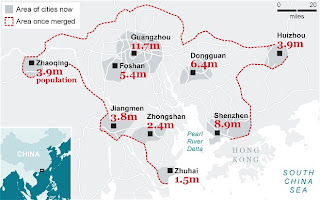 This is a great reminder of just what central planning is supposed to do.  It gets out ahead of the curve to make sure that infrastructure is there when it is needed.  Long after all this is paid for, it will be producing cash for steady improvement.  I watched the same process on a smaller scale happen here in and today we have a system that has kept car traffic down to the same levels experienced thirty years ago.

These massive urban complexes are possible because of efficient rail transport.  Freeways are useful for transporting containers of goods and some traffic but they have never been a good idea for the daily commute.  Hubs allow residential concentration and effective movement.  Thus the mega city is born.

LA would be transformed wonderfully with such a system.

Why we pretend that such planning is not the role of government escapes me totally.  We did plan the moon shot and WWII victory.  Besides, such forward planning is well beyond the capabilities of local funding and abilities.

In , it has needed the province to impose a regional planning mechanism and the federal government to provide additional financing support.

is planning to create the world's biggest mega city by merging nine cities to create a metropolis twice the size of with a population of 42 million.

City planners in south China have laid out an ambitious plan to merge together the nine cities that lie around the Delta.

The "Turn The Pearl River Delta Into One" scheme will create a 16,000 sq mile urban area that is 26 times larger geographically than Greater , or twice the size of .

The new mega-city will cover a large part of 's manufacturing heartland, stretching from to Shenzhen and including Foshan, Dongguan, Zhongshan, Zhuhai, Jiangmen, Huizhou and Zhaoqing. Together, they account for nearly a tenth of the Chinese economy.

Over the next six years, around 150 major infrastructure projects will mesh the transport, energy, water and telecommunications networks of the nine cities together, at a cost of some 2 trillion yuan (£190 billion). An express rail line will also connect the hub with nearby .

"The idea is that when the cities are integrated, the residents can travel around freely and use the health care and other facilities in the different areas," said Ma Xiangming, the chief planner at the Guangdong Rural and Urban Planning Institute and a senior consultant on the project.

However, he said no name had been chosen for the area. "It will not be like Greater or Greater because there is no one city at the heart of this megalopolis," he said. "We cannot just name it after one of the existing cities."

"It will help spread industry and jobs more evenly across the region and public services will also be distributed more fairly," he added.

Mr Ma said that residents would be able to use universal rail cards and buy annual tickets to allow them to commute around the mega-city.

Twenty-nine rail lines, totalling 3,100 miles, will be added, cutting rail journeys around the urban area to a maximum of one hour between different city centres. According to planners, phone bills could also fall by 85 per cent and hospitals and schools will be improved.

"Residents will be able to choose where to get their services and will use the internet to find out which hospital, for example, is less busy," said Mr Ma.

Pollution, a key problem in the Delta because of its industrialisation, will also be addressed with a united policy, and the price of petrol and electricity could also be unified.

The southern conglomeration is intended to wrestle back a competitive advantage from the growing urban areas around and .

By the end of the decade, plans to move ever greater numbers into its cities, creating some city zones with 50 million to 100 million people and "small" city clusters of 10 million to 25 million.

In the north, the area around and , two of 's most important cities, is being ringed with a network of high-speed railways that will create a super-urban area known as the Bohai Economic Rim. Its population could be as high as 260 million.

The process of merging the Bohai region has already begun with the connection of to Tianjing by a high speed railway that completes the 75 mile journey in less than half an hour, providing an axis around which to create a network of feeder cities.

As the process gathers pace, total investment in urban infrastructure over the next five years is expected to hit £685 billion, according to an estimate by the British Chamber of Commerce, with an additional £300 billion spend on high speed rail and £70 billion on urban transport.