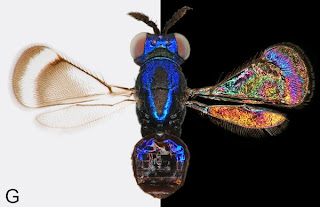 I always enjoy surprise observations missed by everyone.  It is what makes mineral exploration in particular so much fun.  In this case, lab protocol acted to make everyone blind.

What it means is that a whole range of ordinary insects evolved colorful display patterning in the same manner as butterflies and for the same apparent reasons.  An obvious benefit is that it will be the first stop in determining identity of a species.

I am sure we will now soon see plenty of pictures of these new patterns once the protocol is thought out.

A female Closterocerus coffeellae, a fly collected in , looks drab against a white background and shines against black. Credit: E. Shevtsova/J. Kjaerandsen

Tiny wasps and flies look bland at first glance — like any drab brown insect you'd swat away without a second thought. But a closer look reveals a dazzling secret: Colorful wings that have gone unnoticed by scientists for decades.

Researchers at in have discovered that the insect species – hymenoptera wasps and diptera flies – they've been studying for decades reflect light off their wings in rainbow-like patterns. The effect is a bit like oil on water, but these patterns are permanent, suggesting they may play a role in insect communication.

Scientists in the mid-1800s noticed these patterns, but shrugged them off as random and fleeting. Contemporary scientists have missed the colors entirely, Jostein Kjaerandsen, a researcher in the of at , told LiveScience.

That's because lab techniques make the colors all but invisible, said doctoral candidate Ekaterina Shevtsova, who first noticed the colors. "In the lab and under the microscope, we have long established traditions of viewing such small wings against a bright white background, soaked in alcohol or embedded in an oily medium on a slide," Shevtsova said. [Image of fly against white and black backgrounds]

To see the colors, she said, you have to view a living or dried-out wing against a dark background.

Kjaerandsen, Shevtsova and their colleagues published the results online Jan. 3 in the journal Proceedings of the of Sciences.

Shevtsova noticed the patterns one day while working with insect specimens for her doctoral thesis.

"It's not easy to explain, because you observe many specimens every day under the microscope and you don't see it," Shevtsova wrote in an e-mail to LiveScience. "And one day you handle a specimen, which you may very well [have] seen before, and suddenly you notice the wing pattern, which is beautiful and perfect, like an art painting."

Shevtsova could tell the pattern wasn't random or chaotic, she said, and a check of other specimens showed that the patterns seemed stable within species.

"Ever since you saw it, you can't stop seeing it," she said. "It is just not possible to ignore."

She shared her discovery with Kjaerandsen, who was "flabbergasted," he said.

"It was like the world I knew suddenly was turned upside down and a totally new character system was sparkling from every wing of the flies I had been working with for years without really noticing," Kjaerandsen wrote to LiveScience.

The wings of the flies and wasps are transparent, but they reflect about 20 percent of the light that hits them, the researchers found. It's this light that creates the shining patterns, just like a thin film of soap or oil on water creates a rainbow-colored glare.

Insects see color differently than humans, so the patterns likely look different to them, Kjaerandsen said. Patterns are similar within species and vary between species, suggesting that evolution may play a role in the artistry.

"We find it hard to believe that insects walk and fly around with wings that can be turned on to large (to them) flashing billboards without evolution picking up on it," Kjaerandsen said. "We think they are often used for communication between males and females of the same species, especially since many small flies and wasps are known to display or flash wings to each other during courtship."

The wasps and flies aren't the only everyday insects hiding beauty in plain sight. The common fruit fly, Drosophila melanogaster, has jewel-like wings as well, the researchers found. So do a variety of winged bugs in Costa Rican rainforests.

There is one notable exception to the rule, Kjaerandsen said: moths. When the researchers brushed the colored hairs and scales off moth wings, they found colorless wings beneath. That suggests that color patterns don't evolve without evolutionary pressure, Kjaerandsen said.

The next step, the researchers say, is to find out more about how insects display their wings in the wild. They also hope to learn whether evolution drives changes in the color patterns. Hidden signals such as colorful wings can also give researchers clues to the evolutionary relationships between species, Kjaerandsen said.

The study is an example of old-fashioned science yielding new information, Kjaerandsen added.

"These days, when we more and more study biological diversity split down to molecules, traditional morphological studies like this one are on the verge of disappearing from our universities – despite the fact that a major proportion of these tiny sparkling jewels are still unknown to science," he said.