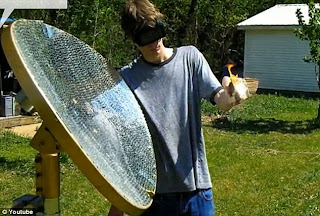 You may wonder why I would care about a solar dish that has been about for thousands of years.  The reason is that I am reminded of a peculiar fact related to this technology.

A smooth parabolic mirror creates too narrow a power peak and this sharply reduces the thermodynamic efficiency of the system itself.

By simply pasting 5800 mosaic like tiles on the surface he has developed a tile sized focus that collects energy from all 5800 mirrors over that cross section without any special peaks that destroy uniformity.

Thirty years ago I met with a developer who had an efficient horizontal parabolic mirror set to capture light over a two inch wide collector for the exact same reason.

One can see here that if the sun’s energy is able to provide one degree of gain through each mirror, then 5800 such mirrors will handily provide 5800 degrees of temperature gain.  Most important it is spread uniformly over a tile sized focus or a bit larger if need be.

The key to this device’s practical importance is the spreading of the incoming energy onto a tile sized focus.  It really could be used for cutting steel.

The take home lesson is that this can be fabricated in your garage from a molded parabolic shape using fiber glass or even plaster. (just use a satellite dish as your initial mold) and a lot of mirrored tiles that are small and a lot of cheap glue.  One would just work in from the outer edge and not worry too much about the center where you may want a hole to send the working beam back.

There is plenty of need in the developing world in particular for a metal cutting tool that is cheap.  This certainly does the job.

Look what I made, mum! Teenager builds 'death-ray' which can burn through almost anything

While many teenagers are content to sit at home playing computer games, this one has set his sights on something a little more ambitious.

Eric Jacqmain, from Indiana in the US, covered an ordinary fibreglass satellite dish with 5,800 tiny mirror tiles - and made his very own 'death ray'.

When aligned correctly it can generate a heat spot a couple of centimetres across, with an intensity of 5,000 shining suns, the 19-year-old claims.

Solar power: Eric Jacqmain labelled his 'death ray' dish his 'latest and greatest solar invention' - and he is working on further developments 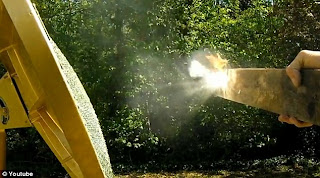 Power: This piece of wood stood no chance against Eric Jacqmain's spectacular invention

The inventor then posted video of his invention on YouTube, with people commenting in awe of the power of the satellite.

It stands at 5ft 9ins and measures just 42 inches across.

Jacqmain, commenting on YouTube said : 'I drilled a small hole in the dish and﻿ glued a piece of PVC pipe on the back.

'Light shines through the hole and hits the translucent plastic on the end of the pipe. All I had to do was aim the dish once and mark the spot.

'As long as the target doesn't conduct heat away too fast it will melt or vaporize just about anything eventually.

'I have vaporized before carbon, which occurs above 6,500 Fahrenheit.'

Next up: The paint can lid is next to feel the power of the satellite 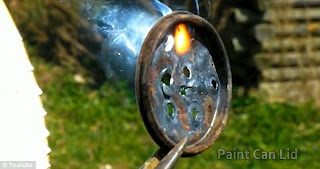 ...but as a hole appears in the lid, the 'death ray' emerges as the easy victor

Putting it into context, just the tiny fraction of the Sun's energy that hits the Earth (around a hundredth of a millionth of a percent) is enough to meet all our power needs many times over.

In fact, every minute, enough energy arrives at the Earth to meet our demands for a whole year - if only we could harness it properly.

Sturdy stuff? Up steps the rock to take on the solar beast 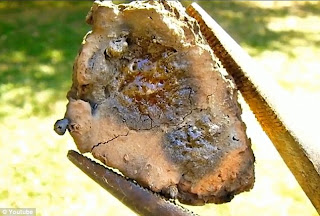 ....but it's the same result as the rays melt through the tough substance

Unfortunately for Jacqmain, his 'death ray' dish met it's own grisly end when it was destroyed in a shed fire.

Jacqmain added: 'Yeah. It "committed suicide". It's very likely that it was the cause of the fire. Nothing left of it but half melted wagon parts and the adjustable mount.'
If there was ever a case of self-destruction, this was it.

But Jacqmain's despair at the death of his 'death ray' has simply spurred him on to develop a yet more powerful alternative.

'Plans already in place for the new one, he added. 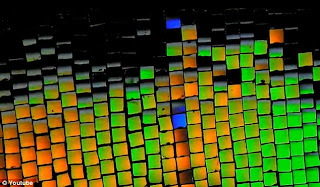 Impressive: Jacqmain's invention was made from an ordinary fibreglass satellite dish and covered in about 5,800 mirror tiles