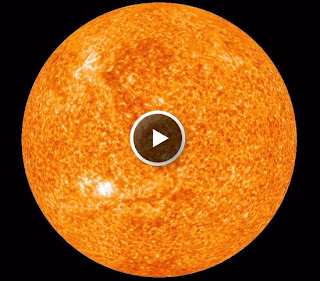 This will be the first of many full images of the sun that captures the whole sun at the same time.  They are setting up to operate for eight years. Most important is that we will now acquire a detailed tracking of this specific period of sun spot activity which has already begun and will continue through the eight years.

In the event, go to the links to look at the full movie as shown.

First Ever STEREO Images of the Entire Sun

On Feb. 6th, NASA's twin STEREO probes moved into position on opposite sides of the sun, and they are now beaming back uninterrupted images of the entire star—front and back.

"For the first time ever, we can watch solar activity in its full 3-dimensional glory," says Angelos Vourlidas, a member of the STEREO science team at the Naval Research Lab in .

The solar sphere as observed by STEREO and the Solar Dynamics Observatory on January 31, 2011. Because the STEREO separation was still slightly less than 180o at that time, a narrow gap on the far side of the Sun has been interpolated to simulate the full 360o view. The gap and quality of farside imaging will improve even more in the days and weeks ahead. [YouTube video]  [full 42MB movie]

"This is a big moment in solar physics," says Vourlidas. "STEREO has revealed the sun as it really is--a sphere of hot plasma and intricately woven magnetic fields."

Each STEREO probe photographs half of the star and beams the images to Earth. Researchers combine the two views to create a sphere. These aren't just regular pictures, however. STEREO's telescopes are tuned to four wavelengths of extreme ultraviolet radiation selected to trace key aspects of solar activity such as flares, tsunamis and magnetic filaments. Nothing escapes their attention. 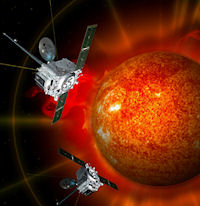 An artist's concept of STEREO surrounding the sun. [more]

"With data like these, we can fly around the sun to see what's happening over the horizon—without ever leaving our desks," says STEREO program scientist Lika Guhathakurta at NASA headquarters. "I expect great advances in theoretical solar physics and space weather forecasting."

Consider the following: In the past, an active sunspot could emerge on the far side of the sun completely hidden from Earth. Then, the sun's rotation could turn that region toward our planet, spitting flares and clouds of plasma, with little warning.

"Not anymore," says Bill Murtagh, a senior forecaster at NOAA's in . "Farside active regions can no longer take us by surprise. Thanks to STEREO, we know they're coming."

NOAA is already using 3D STEREO models of CMEs (billion-ton clouds of plasma ejected by the sun) to improve space weather forecasts for airlines, power companies, satellite operators, and other customers. The full sun view should improve those forecasts even more.

"With this nice global model, we can now track solar storms heading toward other planets, too," points out Guhathakurta. "This is important for NASA missions to Mercury, Mars, asteroids … you name it." 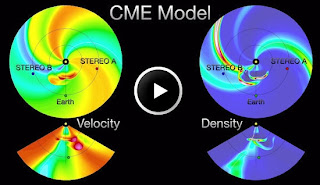 NASA has been building toward this moment since Oct. 2006 when the STEREO probes left Earth, split up, and headed for positions on opposite sides of the sun (movie). Feb. 6, 2011, was the date of "opposition"—i.e., when STEREO-A and -B were 180 degrees apart, each looking down on a different hemisphere. NASA's Earth-orbiting Solar Dynamics Observatory is also monitoring the sun 24/7. Working together, the STEREO-SDO fleet should be able to image the entire globe for the next 8 years.

The new view could reveal connections previously overlooked. For instance, researchers have long suspected that solar activity can "go global," with eruptions on opposite sides of the sun triggering and feeding off of one another. Now they can actually study the phenomenon. The Great Eruption of August 2010 engulfed about 2/3rd of the stellar surface with dozens of mutually interacting flares, shock waves, and reverberating filaments. Much of the action was hidden from Earth, but plainly visible to the STEREO-SDO fleet.

"There are many fundamental puzzles underlying solar activity," says Vourlidas. "By monitoring the whole sun, we can find the missing pieces."

Researchers say these first-look images are just a hint of what's to come. Movies with higher resolution and more action will be released in the weeks ahead as more data are processed. Stay tuned!

Today I have visited your http://globalwarming-arclein.blogspot.com/ and found some interesting information.We think our visitors will be benefited by your sites information.Hope by exchanging link we will be able to promote each other sites.


i have a blog that is related with NASA news and we focus the entire news from NASA and other all information regarding science and technology. As a part to make this blog to known everyone I am in the process of doing link exchange so i would like to do link exchange with you. This blog is not used for commercial purpose and if you would give link, the information about satelite and nasa would get spread and so that others can know some useful information about the science and technology.